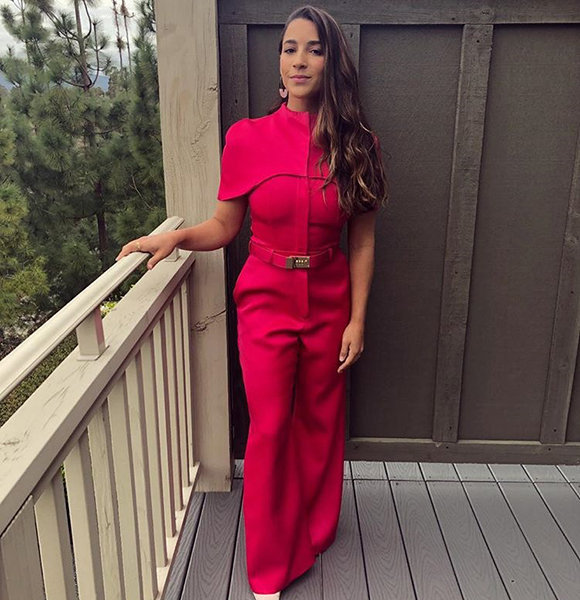 Being one of the most successful female gymnasts, Aly Raisman garnered quite the popularity.

She began her professional career in 2000 when she competed at the American Cup in Worcester, Massachusetts. In her very first competition, Aly placed second with a score of 58,900.

Ever since her debut, Aly gave her best in every competition representing her country. For all her contributions, she was included in the National Jewish Sports Hall of Fame in 2013.

Aly Raisman (full name: Alexandra Rose Raisman) was born in Massachusetts, the United States in 1994 to Rick Raisman and Lynn (née Faber). She celebrates her birthday on the 25th of May every year.

The gymnast is the oldest child of her parents. She has two younger sisters, Chloe, and Madison Raisman and a younger brother, Brett Raisman.

Spending her childhood with her siblings in the city of Needham, Aly studied at the Needham High School and graduated in 2012.

Later, to polish her skills, the gymnast attended classes from Exxcel Gymnastics and Climbing and Brestyan’s American Gymnastics Club.

Belonging to the white ethnicity, the model has long dark brown hair. At the age of 25, she stands with a fantastic height of 5 feet 2 inches (1.57m). Her rigorous training has kept her body well maintained - Aly's weight is 52kgs.

The beautiful model has had her fair share of relationships. In the past, she was in a relationship with her high school beau, Jamie McGill. Together since 2009, Aly even went to prom with Jamie. However, the affair was short-lived - the couple parted ways in 2012.

Next person down the list was American Footballer and The Bachelor star Colton Underwood. The pair began dating after Colton asked Aly for a double date with his friend Andrew East and Shawn Johnson. The duo took their relationship public at Sports Illustrated Sportsperson of the Year event in December 2016, but it only lasted six months.

Since then, she has not been indulged in any dating affair.

In 2012, Aly competed at the Olympics in London. She was part of the Fierce Five and helped them qualify for the finals in the first place. Aly placed first in the floor finals with a score of 15,600 and became the first American woman to win a gold medal on floor.

Again in 2016, Aly competed in the Rio de Janeiro Olympics and won a gold and two silver medals.

Following the success, rumors of Aly's desire to retire began to surface on the internet. However, the gymnast cleared up the baseless accusations with an interview with BusinessInsider in September 2016. She mentioned that she would be taking a break but, would be back for the 2020 Olympics.

Still making and breaking records, there is no doubt that Aly has made herself known globally. Furthermore, the success has also changed her lifestyle. Aly boasts a net worth of $2 million in 2019.