Who Is Alysha Del Valle, NBC4 Journalist Married To & What's Her Salary?

By LRU Writer | On: November 25, 2018
Alysha Del Valle is an American traffic anchor and reporter, currently working as a traffic anchor in NBC4. In her long and glamorous career, the reporter has managed to keep her personal life...Mother to her daughter, her husband...Alysha... 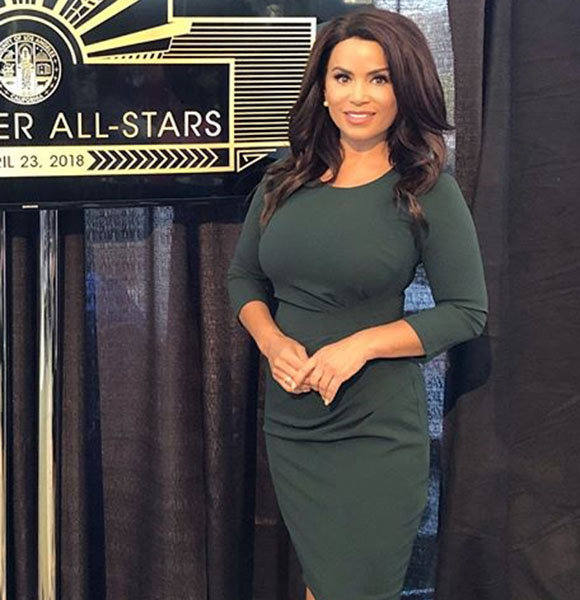 However, the glamorous newscaster, who provides traffic updates to her viewers to help them navigate the traffic jams smoothly, has had rising interest from her viewers over her personal life.

Over the course of her long reporting career, Alysha, with her tremendous good looks and her bubbly personality, has ruled over the heart of millions. This has led to much curiosity about the anchor’s love life. However, she seems up for the challenge and has not let her personal life overshadow her professional endeavors.

NBC4’s traffic anchor and reporter, Alysha has witnessed several ups and downs in her long career. However, she remains properly compensated for the effort and hard work she puts into the job, landing some huge salary figures.

Alysha, at age 46, despite being constantly on public eyes with her work, has surprisingly been able to maintain an extremely mysterious personal life. Preferring to keep her private life low-key, she has not faced any rumors regarding her romantic relationship in her career duration.

You May Also Like: Leon Harris Is Surprised Over New Job With NBC4 After Leaving The ABC News

However, the reporter has been quite open about her daughter Rain Paloma. Born on 7 June 1994, Rain has appeared on the 46-year-old’s social media accounts where she is seen singing praises of her 24-year-old daughter. However, Del Valle has not yet provided any sort of details regarding the father. Following in the footsteps of her mother with an extrovert personality, Rain has, however, provided some sort of insight over Alysha’s personal life. In her own Instagram account, she posted a picture of a man she terms as a father, who is much likely to be Alysha’s former husband. Rain has also gone on to reveal some information about her stepmom in some of her tweets, indicating Alysha and her husband are already separated, and the anchor is currently single.

“I miss my boyfriend, my mom, my Nani, my cat, all my dogs, my boyfriend's dogs, my sister, my dad, and my stepmom, my little cousins, my ninas.”

Head over heels for her daughter Rain, Alysha thus seems to have her hand full with her attention divided between her career and daughter. Thus, Alysha, at age 46, remains single. However, with such attractive looks and a charming personality, it wouldn't be much of a surprise if the reporter starts dating someone down the line.

Born and raised in Los Angeles, California, Alysha attended the University of Southern California on an academic scholarship and graduated in 1994.

Post her education, she has gained experience working on several channels and radio stations, including her tenure as a traffic reporter for The George Lopez Morning Show on Hot 92 Jamz.

Chery was added to an already accomplished reporting career when Alysha landed her dream job at NBC4 as a Traffic Anchor and reporter on August 2017. She currently performs her duties at NBC4 Southern California’s morning newscast, Today in LA.

Post her appointment at the channel, vice president of news for NBC4 Southern California, Todd Mokhtari, praised the anchor’s analytical details in a statement.

Standing in at a height of 5’2”. Alysha, for her association with the channel, bags some decent salary returns. While an average NBC reporter earns around $47k per annum, it would be safe to assume that Alysha, with the experience and dedication she brings with herself, earns much more.