By LRU Writer | On: January 28, 2020
America Ferrera is an actress popularly known for her role as Betty Suarez on ABC's Ugly Betty...married her husband on...wedding ceremony...welcomed their first baby on...and they are also expecting their second child in...at the age...and her family members include...has a net worth of around...at the height of 5 feet 1 inch (1.55 meters)...America's ethnicity is... 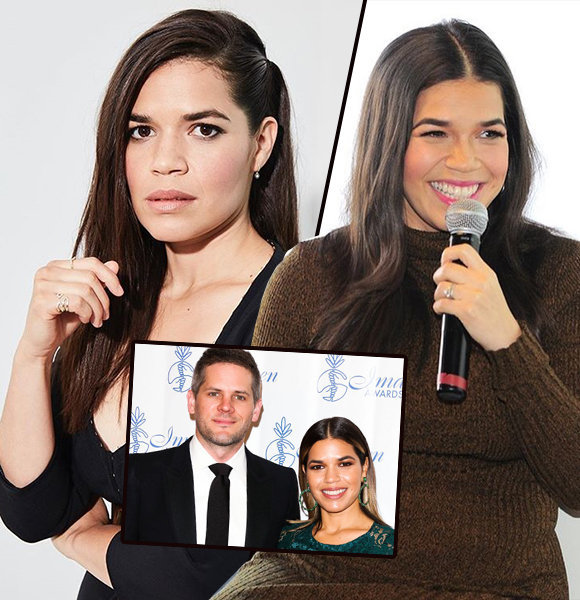 America Ferrera is an American actress who first started acting at the age of eight in community theater and school plays. She later went on to appear in movies like Real Women Have Curves (2002) and The Sisterhood of the Traveling Pants (2005).

Further, the actress is best known for her role as Betty Suarez on the ABC show, Ugly Betty (2006).

Also, she has voiced a character called Astrid the Viking, in the DreamWorks animated film, How to Train Your Dragon (2010).

The California native has been married to Ryan Piers Williams since 2011. The pair first met when Ryan cast America in his student film at the University of Southern California.

Further, they began to date each other around 2005. And after two years of seeing each other, America and Ryan got engaged on 17th June 2010.

On 27th June 2011, America married her longtime boyfriend in an intimate ceremony with family and friends. The wedding ceremony was attended by famous names like Vanessa Williams, Rebecca Romijn, and Jerry O'Connell.

America's The Sisterhood of the Traveling Pants (2005) co-star Blake Lively was also present as a guest.

Moreover, the Superstore (2015-2020) actress and her husband were blessed with their first child, Sebastian Pier Williams, on 29th May 2018.

Besides, the couple is expecting their second child in 2020. The actress shared a picture flaunting the baby bump on her Instagram handle on 1st January 2020.

Who Is Ryan Piers Williams?

Ryan owns a production company called Down by the River Productions.

Family Details And Some Interesting Facts About America Ferrera