By LRU Writer | On: July 17, 2019
Andie MacDowell the American actress became the first actress in US cinema history to bag back-to-back number one films at... the actress also had three-step-sister as her...first married Paul Qualley in...again engaged in a love affair with childhood friend Rhett DeCamp Hartzog, a business, and married him on... enjoys a lavish lifestyle and possesses an impressive career to look... 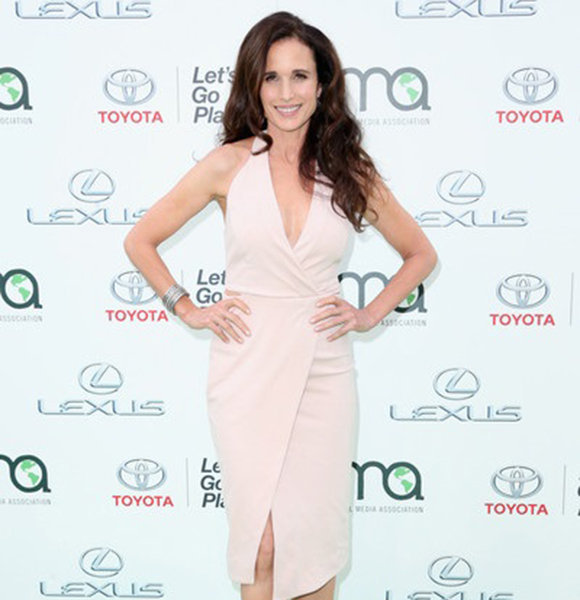 Starting her journey as a cosmetic model, actress Andie MacDowell has come a long way in getting international recognition and fame.

The South Carolina native was the first actress in US cinema history to bag back-to-back number one films at the domestic box office in 1994. Following her tremendous acting demeanor, she received the LA Film Critics Award for Best Actress, Independent Spirit Award for Best Female Lead in 1998.

Andie MacDowell was born and raised in Gaffney, South Carolina on  21 April 1958.

The actress was brought up by her parents: Marion St. Pierre MacDowell and Pauline "Paula" Johnston. Andie's father was a lumber executive, while her mother worked as a teacher.

Her parents divorced when Andie was six years old. Along with her parents, the actress also had three step-sisters in her family. Talking about her ethnicity, she boasts English, French, Irish, Scottish, and Welsh ancestry but has a southern-inflected accent.

Further, the actress stands at a height of 5 feet 8 inches (1.72 meters). She regularly follows yoga, which has helped her maintain a healthy weight of 57 kgs even at the age of 61.

There are ups and downs in every people's lives, and Andie MacDowell is no different.

The Legend of Tarzan actress gathered a lot of attention with her married life and divorces between 1986 to 2004.

She first married Paul Qualley in 1986. But after four years of togetherness and nurturing three children, the couple parted ways in 2000.

But, it did not end there for Andie. She got engaged with childhood friend Rhett DeCamp Hartzog, a businessman by profession, and married him on 10 November 2001. However, the marriage did not last as the couple separated after three years in 2004.

Following back to back divorces, the twice-married actress raised eyebrows when she got engaged with a car salesman named Kevin Geagan in 2006. But, the pair soon called quits to their relationship and went their separate ways.

Although her married life isn't much successful, Andie is an ideal mother to her three children; son Justin and daughters: Rainey and Margaret Qualley. Her daughters are also following their mother's footsteps and pursuing a career in modeling.

After years of acting and facing two broken marriages, the actress now enjoys her responsibility as a mother and is not engaged or dating anyone.

Andie MacDowell enjoys a lavish lifestyle and possesses an impressive career to look back.

Initially starting as a model in her early days, the American actress made a tremendous leap in 1984 when she made her debut in the movie, Greystoke: The Legend of Tarzan, Lord of the Apes.

Soon after, she became the face of L’Oreal Paris for over a decade, featured in commercials, and landed recurring roles in top TV shows and movies. Some of her high-rated acting jobs include her works in The Six Wives of Henry Lefay, Green Card, and The Last Sign.

From her multiple opportunities in brand endorsements, commercials, and films, Andie has managed to take her net worth up to $20 million.