By LRU Writer | On: November 03, 2019
Margaret Qualley and her rumored boyfriend attended...While Margaret’s career in Hollywood is rising, so is the interest in her dating life...Plus, her modeling career also adds to her growing net worth... 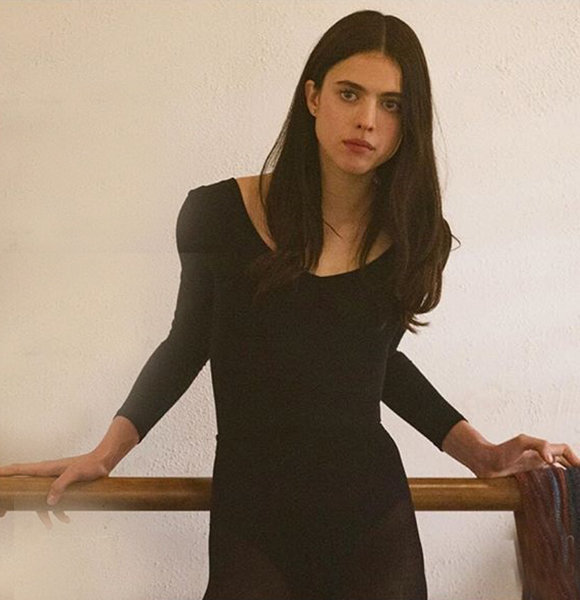 She was set to star in major 2019 projects, namely Once Upon A Time In Hollywood along with A-listers Brad Pitt and Leonardo Di Caprio and TV series, FX’s Fosse/Verdon. Though relatively a fresh face, she had been in the acting circuit for a while; she made her debut in 2013 in the film Palo Alto.

Add to that, Magaret is a trained ballerina and a model. She has an apprenticeship at the North Carolina Dance Theater Company and has been featured in major magazines, namely Vogue, Teen Vogue, and Vanity Fair.

In 2018, the world media started following the actress when news broke that she was dating Mr & Mrs. Smith star, Brad Pitt - 31 years her senior.

The reason behind the conjecture was Margaret was seen hugging her Once Upon A Time In Hollywood co-star. However, neither the actress nor the megastar commented on the dating rumors.

Well, the love affair news was not the first time the model got linked to a much older man. In 2017, she and Emmy winning director Cary Fukunaga were rumored to be in a relationship. The alleged involvement made headlines as the True Detective fame director was 17 years her senior. However, neither of the two came out with their relationship confirmation.

Previously, Margaret was in a dating relationship with her Palo Alto co-star Natt Wolf in 2011. The young co-stars dated for three years before parting ways in 2014. Post-break-up, she maintained a friendly relationship with her ex-boyfriend as they worked together in the Netflix series Death Note in 2017.

During late 2018, hot rumors were floating around that the actress was dating SNL comedian Pete Davidson. By the look of it, there was a high probability that it could turn out to be true.

On 30th August 2019, Margaret and her rumored boyfriend attended the Venice Film Festival during the premiere of her new movie, Seberg. Before the event, she had landed in Venice's Marco Polo Airport together with the actor.

As per some reports, the two were seen arriving at the airport with all smile and laugh on their faces. Although for the event, they didn't make an appearance together in the red carpet, Pete sat right behind her throughout the movie, eyeing her from time to time.

Furthermore, the next day, the two were spotted spending a night together in Italy. So, it appeared something was cooking up between the two. But, since none of the stars confirmed the relationship, it was kept under the curtains for a while.

However, it was evident that the loving couple were into each other and hinted, so when they went sightseeing, holding each other's hand. On the other hand, Margaret's mother commented on her daughter's relationship, saying it was going quite well between both of them.

Saying that the whirlwind romance was put to the halt when sources opted that the two split and were only good friends. Even though it was a tough pill to swallow for Margaret, who immediately went to her mother for advice, Pete was pulling strings with a model named Kaia Gerber.

A fan spotted the two enjoying a private time at the corner table in the restaurant, with both putting a broad smile on their faces. It seems as though Pete had already moved on in his life, whereas Margaret was keeping her mind away from all the commotions with yoga and hiking trips with her mother.

Net Worth Plus Family

As an emerging actress, Margaret earns around a salary of $86,067. Her modeling career also adds to her growing net worth.

Though The Leftovers actress is still trying to make a name for herself in the movie industry, she gets financial help from her famous actress mother.

Well, Magaret’s mother is none other than Four Weddings and a Funeral fame Andie MacDowell. Her momma’s net worth of $ 20 million surely supports Margaret to make bold and exciting choices in Hollywood as she doesn't have to worry about financial issues.

Well, Andie is not the only famous person from the actress’s family. Her father, Paul Qualley, is a former model and her sister Rainey is a country singer. Margaret also has a brother named Justin. The three siblings grew up in two homes as the actress’s parents separated in 1999.

Born in 1995, Margaret celebrates her birthday on 23rd October. The 24-year-old is a Scorpio according to her birthday.

The beauty of a height of 5 feet 8 inches(1.73 m) was always creatively inclined. Thus, Margaret started her dance education early and became a ballet dancer. She danced well and managed to get into the North Carolina Dance Theater company as a step towards a professional dancing career.

During her dancing education, Margaret realized that she wanted to get into acting and work in TV shows and movies. Thus, she diverted her path towards acting and started her education at the Royal Academy of Dramatic Art in London.