By LRU Writer | On: May 09, 2019
Andrew Frankel married the love of his life, Bridget Moynahan on 17th October 2015 in a secret ceremony...The businessman pulled a surprise wedding as guests arrived at the venue thinking the ceremony was for harvest moon celebration instead were part of the union...The wedding was very special as Andrew’s three sons from a previous marriage and Bridget’s son Jack with NFL champ Tom Brady were getting a chance at a new family... 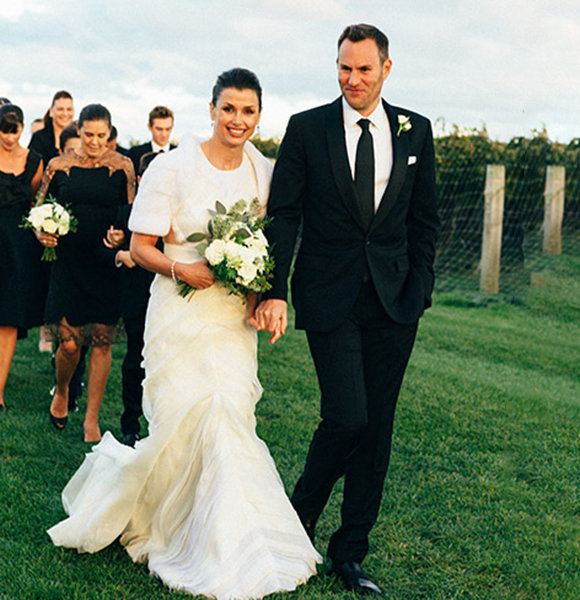 Andrew Frankel, the business mogul, married the love of his life, Bridget Moynahan on 17th October 2015 in a secret ceremony. He pulled a surprise wedding as guests arrived at the venue thinking the service was for harvest moon celebration; they didn't know they were part of the union.

Interstingly, the wedding was extraordinaire as Andrew’s three sons from a previous marriage and Bridget’s son Jack attended the ceremony to experience a chance at a new family.

Born to broker father, Andrew moved towards his old man’s path when he joined the University of Pennsylvania to study Bachelors of Arts in Economics. After completing education, Andrew joined his father’s company, Stuart Frankel & Co. in 1993.

With graduation in 1994, he started giving his best towards the company.

Although his net worth is not revealed yet, he boasts a handsome salary as the co-president of his family company. Additionally, his actor-model wife’s net worth of $25 million makes them a power couple.

Andrew was in a long marriage with his first wife.

A private person, he refuses to reveal about her identity. But one thing is for sure, the former husband and wife put their three sons in the top of their priority list. Although their marriage is over, they continue to co-parent their three sons.

Andrew’s wife, Bridget's birth name is Kathryn Bridget Moynahan. After getting her start in acting in Sex and the City as a guest star, she went on to work in the movies; Coyote Ugly, and Serendipity. She was ranked 86 in Stuff magazine's 102 Sexiest Women In The World in 2002. But, it was her affair with New England Patriots pro - Tom Brady that shot her to fame. The pair went out for a good three years before calling it quit in 2006.

Bridget’s ex moved on with supermodel Gisele Bündchen, but things were about to get complicated between the former lovebirds. Months after separating from Tom, the Lord of War actress got to know about her pregnancy. A traditional girl at heart, it was difficult for her to become a mother without marriage, but she pushed through.

Well, she welcomed her wonderful son, John Edward Thomas Moynahan on 22nd August 2007 and her life was never the same. The American beauty continues to co-parent her son with ex-Tom Brady. Her son also shares a beautiful relationship with his half-siblings from his father’s side.

Taking about Bridget’s measurements, she is blessed with a height of 6 feet 4½ inches (1.94 m) and a complementing weight.