By LRU Writer | On: November 23, 2018
Your way to the healthy and happy relationship is not always straight and easy. Despite the ups and downs that one faces maintaining a healthy relation, some couples handle their relationship with ease even if there exist an extramarital affair.

Some people need to go through many relational trials to find the perfect one for them. But even after finding the right one, they still interconnect their life with their older estranged partners.

Such is a story shared by the BBC reporter Anneka Rice, who has gone through two failed marriages before spending the rest of her life with her current partner Simon Bell.

Giving a new definition to the relationship, she has shown the art of moving on and finding love in other people to the world.

Once Married, Anneka Calls An End With Her First Two Husbands!

Former treasure hunt presenter, Anneka Rice tied the knot with theater producer Nick Allott in the year 1988. After a couple of years of togetherness, they together share two sons Thomas Allott, and Joshua Allott. 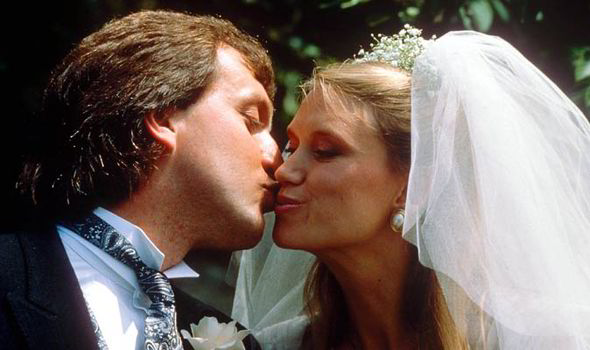 Anneka and her husband Nick got separated in the year 1992 without giving any official statement on why they split. Right after her split with Nick, she was found to be in a relationship with Tom Gutteridge.

Tom and Anneka have a son named Sam. Soon after Sam was born, Anneka and Tom got separated. Tom is an Emmy award-winning British television executive, producer, and director. Currently, he is an executive producer of “BattleBots,” the ABC series.

Though Anneka and Nick aren’t living together; they remain married for around twenty-four years. In an interview to Sebastian Shakespeare for Dailymail, Anneka and her estranged husband Nick has talked about their marital relationship. Anneka said;

“Everyone thinks we’re divorced, but we’re not, ‘It’s no big deal interviewing him because we’re friends.”

Likewise, Nick, who is now living with journalist Christa D’Souza spoke to Sebastian-

“I don’t think it’s anyone else’s business why we’ve taken the decision to stay married after all this time. Maybe people think it’s weird. We have our reasons. It suits us. We are civilized people.”

In one of the interviews with Telegraph, Anneka revealed the situation when she was separated with her husband. She said-

“We will get around to divorcing. Most people get divorced because they are always arguing about money. When Nick and I split up, I was the breadwinner; I was paying the school fees. He had a good job so money was never discussed, therefore what is there to argue about? We will do it one day, but God knows when.”

Aneeka Still A Loving Parent To Her Kids Despite Her Relationship Qualm!

After a failed marriage and broken relationship, Anneka has found love again and is in a romantic relationship with writer Simon Bell. The couple started dating since 2005.

The Same year they went public about their relationship by appearing together at the Albery Theatre in the West End. They live together in Barnes, South-West London where they share the same home. According to the friend of Anneka, they are widely happily living together as in the statement her friend explained;

“I know that they are very happy and have been together for a while. Everyone is glad for her and it is no big secret. She is just really enjoying life with him, they get on brilliantly and it is a proper, happy grown-up relationship which will hopefully last for a long time.” Anneka Rice captured with her children on a vacation in Northern India in 2011 (Photo: dailymail.co.uk)

Currently, she shares some journey of her spectacular yacht ride with her kids. Her yacht trip started from Dubrovnik to Mljet National Park then to Marco Polo's Native town Korcula then finally yo Vis island.

Her incredible yacht ride was a bang on memoir the reporter spent it with her kids.