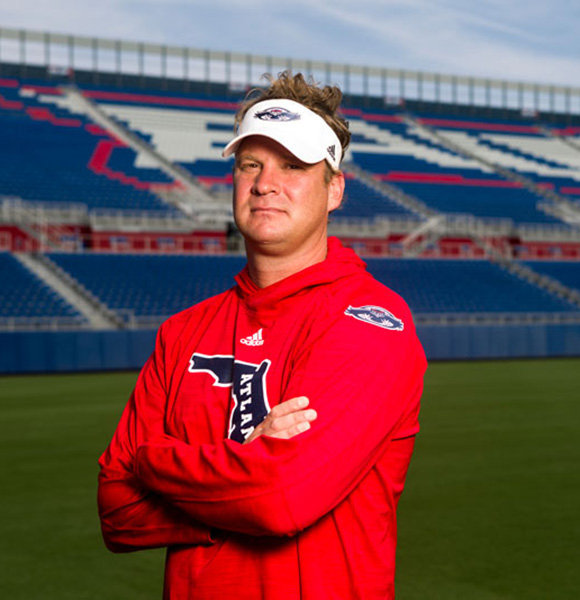 Football coach Lane Kiffin was a relatively unknown figure known mostly to football fans. Still, after the rumors of him having a sexual relationship with his head coach's daughter surfaced back in 2015, he became one of the most searched subjects internet overnight.

Lane, who had a happy family consisting of a wife and three children before the gossips, had to bid farewell to his wife as the news of his affair brought discord in his marriage and eventually resulted in divorce.

Post the divorce, has he been dating any girlfriend, or does he lead a single life as a loner? Read down below to find out!

Lane and his wife were once considered an ideal couple; however, the marriage could not last more than a decade due to an unfortunate turn of events.

The Lincoln, Nebraska native had first met Layla Kiffin (Greer Reaves) in 1999 through his father, Monte, who worked as an NFL defensive coordinator. The romance between the two soon blossomed, and the couple got engaged after a mere three months of dating.

Lane even sought the permission of Layla's father before proposing her for marriage. Layla's dad, Dan Reaves told talked about Lane's proposal in an old interview,

"I thought he was going to say that he was getting out of coaching and wanted a job. Instead he asked if he could marry my daughter. I called her to ask her, ‘Is he serious?’ I wasn’t supposed to ruin the surprise. They bought an engagement ring that same day."

Lane and his wife Layla Kiffin eventually got married on 1 July 2004. A year after the marriage, Layla gave birth to her first child, a daughter named Landry. Two years later, the couple became parents to a second daughter, Pressley.

In 2009, Lane and his wife welcomed their first son, who was named Knox after Knoxville.

More From LiveRamp Up:- Ryan Giggs Has One Of A Kind Multiple Affairs with Girlfriends! A Detailed Look On His Divorce with Wife and What Caused It Lane Kiffin along with his wife Layla Kiffin and children (Photo: MarriedBiography.com)

Lane and his wife were leading a happy life with their children, celebrating different occasions together. For instance, on 3 January 2012, Lane tweeted to wish his wife on her 37th birthday. He wrote on his Twitter,

However, by August 2015, rumors started circulating that Lane had an extra-marital affair and even got physical with Kristen, the daughter of University of Alabama's head coach Nick Saban. The gossips spread like wildfire, and there were trolls all over the internet, mocking Lane for his affair. Even his Wikipedia page was edited by an unknown user to mock the former USC head coach.

While the rumors have never been confirmed, it eventually reached Layla's ears, after which she took the bold step of filing for divorce on 28 February 2016, citing irreconcilable differences.

"After a lot of careful thought and consideration, Layla and I have mutually decided to divorce. We are fully committed to our kids' future being our No. 1 priority. We will maintain an amicable relationship with respect for each other as we raise these three wonderful children. We will have no further comments and appreciate respect for our family's privacy."

Lane Kiffin's wife even asked for spousal as the divorce settlement, and he was ordered to pay 34.5% for his total income. Lane was later free of his responsibilities as an Offensive Coordinator, which brought financial problems to him. He was even heard saying in an interview with Pete Thamel,

Despite the divorce, Lane remains on good terms with his former wife, and Layla occasionally even tags her ex-husband in social media posts.

On 2 October 2016, Layla shared a picture alongside her children and reminded Lane that their kids were the most important trophies he could ever achieve. He is not known to be dating any girlfriend, just like his ex-wife, who remains single after the divorce.

And even if he is dating someone, Lane would certainly keep his girlfriend's identity a secret as he must have learned a hard lesson after the last time.\

Lane Kiffin was born on 9 May 1975. His father, Monte Kiffin, was a defensive coordinator in the National Football League, notably for the Tampa Bay Buccaneers. Likewise, his brother Chris is the Defensive Line Coach for the Cleveland Browns.

Lane attended Bloomington Jefferson High School in Minnesota in 1994 and played college football for Fresno State University. His time in the Fresno State Bulldogs team as a quarterback led him to become a Student Assistant Coach for coach Jeff Tedford till 1998.

A year later, he worked as a graduate assistant at Colorado State University for a year. Then, he became a quality assistant for the Jacksonville Jaguars.

He spent almost 5 years with the University of Southern California (USC) as a tight end coach, wide receiver coach, and offensive coordinator. Initially, he was hired as a Tight End coach by Pete Carroll in 2001. For two years (2002-2004), he was handed over the wide receiver coach's responsibility. And in 2005, he was promoted to offensive coordinator.

After a successful stint at USC, he was hired by Al Davis, the Oakland Raiser's owner, in 2007. However, he was fired by Davis himself, citing he (Lane) brought disgrace to the organization.

For a year, he was part of the University of Tennessee Volunteers in 2009. Then, USC again hired him, but this time as a coach. He spent three years there and later joined the Alabama Crimson Tide football in 2014.

After two years, he joined Florida Atlantic University as a head coach. He led the team to a 10-win season and second c-USA championship.