By LRU Writer | On: September 21, 2018
Arianny Celeste Dating Status Now; UFC Diva Well Over Abusive Boyfriend? Arianny Celeste, American model and UFC ring girl,  is one of the most recognized faces in the modeling industry. Not just that, it’s the model's love life that has kept the news feed buzzing. With a long list of dating history, she has always been the constant feature of page 3.Wondering who the model is dating now? 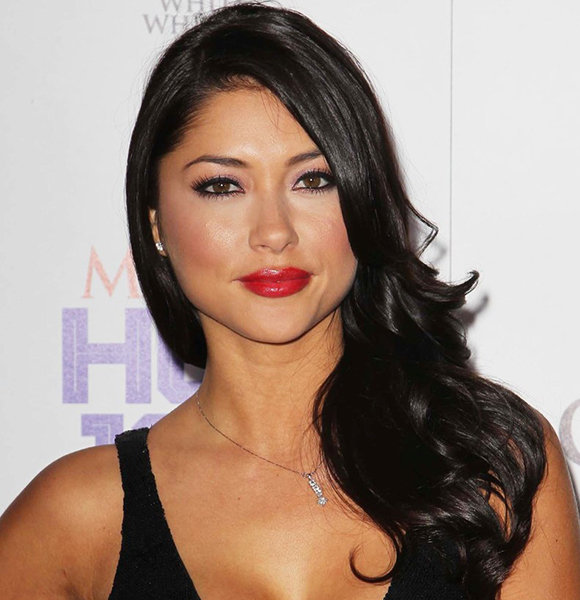 Arianny Celeste, American model, and UFC ring girl,  is one of the most recognized faces in the modeling industry. The Sin-City native has appeared on the cover of high profile magazines such as MAXIM, Sports Illustrated, and Playboy, and is known for her killer smile and bewitching beauty.

Not just that, it’s the model's love life that has kept the news feed buzzing. With a long list of dating history, she has always been the constant feature of page 3.

Wondering who the model is dating now? If yes, then this article's just for you!

Arianny, who possesses Mexican-Filipino ethnicity, was reported to be dating US R&B singer Tyga after the pair attended the Universal Studios' Halloween Horror Nights together on 23 September 2017.

The couple was photographed enjoying each other's company with hands on each other's waist, indicating that their relationship was a bit more than just friends. However, there was no confirmation from the pair about their dating status and lack of public sightings together also did not help the fact. But, their relationship was just a rumor as Tyga was dating Hungarian model Barbara Palvin.

Since then, Arianny has stayed away from the spotlight and seems to enjoy her singlehood after going through numerous failed relationships.

The Model with measurements 38-25-34 was previously linked with the Blink-182 drummer, Travis Barker in 2015. Similarly, she was also rumored to have dated the UFC fighters, Josh Burkman and Tiki Ghosn.

Don't Miss: Anthony Pettis in a Perfect Dating Affair! Only Love Between Him and Girlfriend

But one of the most recognized relationships she went through was with American businessman Pravin Chandra, which landed the par in jail.

The pair was involved in a bitter feud resulting in their arrests in the early hours of 26 May 2012. There was blaming and counter blaming between the couple about their fight. Mugshot of Arianny Celeste with her ex-fiance Pravin Chandra after being arrested (Photo: bloodyyellow.com)

Pravin accused Arianny of kicking him in the nose, while Arianny accused Pravin of trying to choke her to death and retaliating in self-defense. One source close to the couple was quoted saying the animosity between the pair started after Pravin objected the model's racy video shoot with Canadian musician Deadmau5.

Upon their release, the couple settled their differences, and it was even reported that the couple got engaged in 2013.

However, the couple parted their ways in 2014. When asked about her engagement, Arianny replied that it was a mistake she had committed and now was over that part of her life.

It turns out not only her love life but her professional life also make a buzz in the media. She recently dropped incredibly revealing pictures of herself making the media buzz.

Recently she had a topless photo shoot which was lensed by LA-based model photographer Martin Murillo. While her photos are pleasing to the eye, she made sure to give a preview of the photo shoot to her followers.

Well, her photos are eye-catching while it keeps every other profile dwellers drooling over her pictures.

Keep Visiting for the emerging updates on the life of Arianny Celeste!