By LRU Writer | On: August 12, 2019
Ashley Iaconetti Dating Kevin Wendit! Romance on Fleek Ashley Iaconetti, best known for her appearance on the season 19 of ABC reality TV show ‘The Bachelor’, fits the quote as she too found the love she was longing for in an unexpected person. 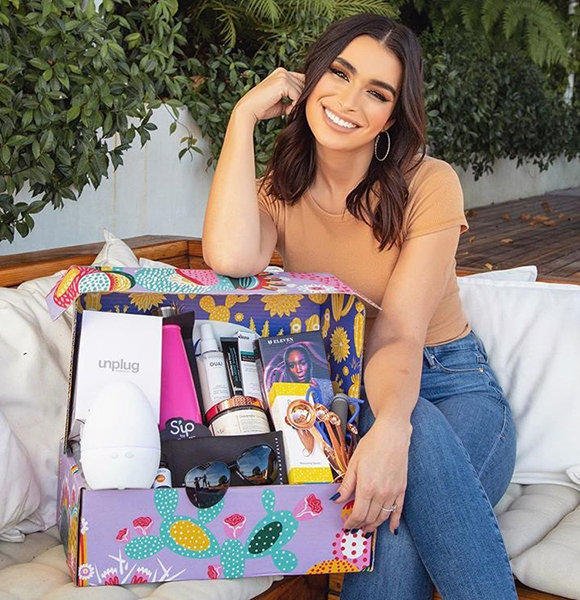 Love has its way of finding itself!

TV Personality Ashley Iaconetti, best known for her appearance on the season 19 of ABC reality TV show ‘The Bachelor,’ somewhat fits the quote. She too found the love she was longing for in an unexpected person.

Curious about knowing how love opened up the door for her? Well, read along to learn more!

Ashely found an ideal husband in The Bachelorette Alum Jared Haibon. The journey to their wedding, however, was far from a smooth ride. The former Bachelor contestant met her other half while filming the second installment of Bachelor In Paradise in 2015. Despite not making it through the end, the couple remained connected as friends.

Reuniting for the third season of Bachelor In Paradise, Ashely and Jared Haibon ignited a flame but eventually faded out. And as they began dating other people, the duo continued to harbor feelings for each other.

When Ashley finally broke things off with then-boyfriend, Jared penned a three-page love letter for her. And before the world knew it, they were dating again.

Ashley Iaconetti was in a romantic relationship with Kevin Wendt, a former Canadian Bachelorette contestant. The duo competed on the Olympic-themed spin-off show 'The Bachelor Winter Games.'

Ashley first met Kevin in the show. While talking with PEOPLE, Ashley opened up about the time when she first saw Kevin. She divulged,

“When I saw him for the first time at the parade, I was like, ‘That means trouble. He’s hot. I’m probably going to cry, and it’s not going to work out,'”

However, Ashley joined the show with no intentions of finding her other half. She added,

“I went into the Winter Games just with the intention of hanging out with my friends ,so I had no idea that I’d meet somebody, too. I definitely was like, ‘Foreign guys!’ But Canada, sure.”

The couple got portrayed on the show as being "hot and heavy" with plenty of makeout sessions.

However, Ashley's v-card had remained the topic of debate since the first time she appeared on 'The Bachelor' franchise. Well, the dating speculation wasn't out of the air as she had begun dating Kevin Wendt. Ashley, with her once-boyfriend Kevin, had their experience in the fantasy suite which raised doubt among the fans if Ashely loses her V-card on the show. A fan of Ashley tweeted,

“DID @ashleyiaco JUST MAKE HISTORY ON THE @BachWinterGames?? First contestant to lose their v card on the show??”

“No. Pizza, wine, talking, and making out. I want this to be clear,”

She was clear then. However, in the beginning, Ashley was determined to not open up about it as someone else was associated with that topic of her life.

Before Kevin, she got romantically linked with Ben Higgins after they were spotted together in a concert.

Ashley Laconetti was born on 6 March 1988 in Great Falls, Virginia. She grew up in a family of four along with her sister Lauren. Her parents share the bond of love for 41 years, leaving an example of respect for their children.

Ashley, who stands at the height of 1.68m(5 feet 5 inch), currently lives in Wayne, New Jersey. She graduated from Langley High School in Northern Virginia in 2006 after which she attended James Madison University to pursue her interest in Media Arts and Design.

After completing her undergraduate, she joined S.I. Newhouse School of Public Communications at Syracuse University, New York where she earned her master's degree. After graduating from Newhouse School, she completed her internship at Syracuse's ABC affiliate NewsChannel 9 WSYR.

After finishing her education and gaining the degree, she worked as a sports reporter and freelance journalist for some time.

However, she then held a job in New York City as a freelance journalist for Cosmopolitan. On the Cosmopolitan, she wrote about the 'Bachelor in Paradise.'

Besides that, the reality TV star Ashley is an American make-up artist, videographer, and blogger. She rose to fame after competing for the heart of Chris Soules on the hit ABC series 'The Bachelor,' season nineteen.

Apart from her work behind the cameras, she has worked as a reporter for ‘Jets Insider.’ She also has a blog where she discusses her thoughts on various events from the shows.

Likewise, she also provides beauty and make-up tips to her readers, which has gained her a substantial following on her beauty and lifestyle blog Duchess Kimberly.

In addition to those, Ashley owns a video production company called E & S Media Creations. The company remains dedicated to a wedding, sports, and corporate videography.

With her involvement in various career paths, she has undoubtedly garnered a notable wealth to her. The exact figures of remain confined, but it is estimated to be in new millions.