By LRU Writer | On: January 08, 2020
Ben Napier is married to Erin Napier...their wedding took place in a chapel among their close friends and...the two are already parents to their baby...As per Romper.com, Ben's reported net worth is at least...While talking about the motivation behind the weight loss, Ben cited...Talking about his assets, he co-owns a beautiful...age and height... 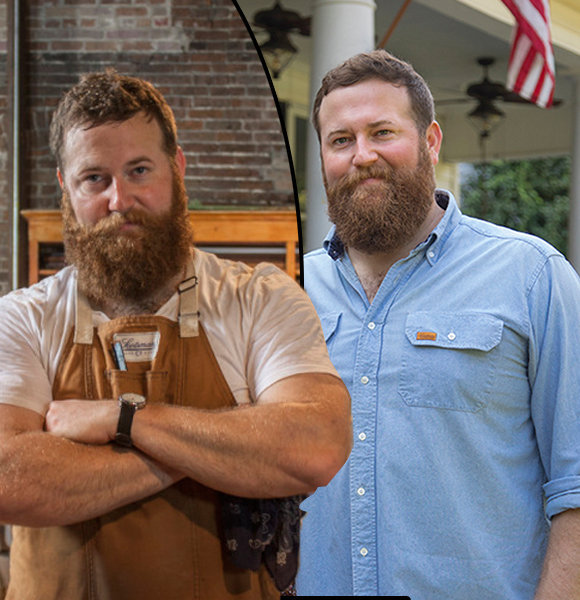 Professional craftsman and woodworker Ben Nappier achieved significant fame following his appearance in the reality show, Home Town (2017). In the show, his talent and passion for renovating historic homes generated a wide fan following, and his Instagram followers of more than 170K followers are the living proof of it.

Prior to gaining fame from the showbiz, he served as the youth minister at Laurel First United Methodist Church until 2014.

Apart from his work onscreen, Ben also operates a shop that specializes in selling heirloom wares and durable goods made in their home country USA.

Ben is married to Erin Napier, co-host from his hit HGTV show Home Town. The two started dating in 2004 during their college years at Jones County Junior College.

Interestingly, as per Ben's Instagram post on 7th December 2015, both of them fell in love with one another following their first meet on 1st December that year.

Finally, after dating for two years, the reality star got engaged to Erin in 2007. He proposed to his girlfriend with a diamond ring that he had purchased after saving money for three years. A year later, after the engagement, the pair tied the knot on 22nd November 2008. Their wedding took place in a chapel among their close friends and family.

On the occasion of their 10th anniversary in 2018, Ben even shared some snapshots of their wedding, including their first dance as a married couple. Today, the two are already parents to their baby daughter, Helen Napier. She was born on 3rd January 2019 and named after his wife's grandmother.

By 2019, the 6 feet & 6 inches (1.9 meters) tall reality star went through a noticeable body transformation as he lost a bodyweight of 55 pounds.

In order to get into proper body shape, he followed a strict sleep habit and proper exercise. As per his wife Erin, the actor gets up early at 4:30 and plays basketball daily.

Likewise, he does cardio as well, along with weight training. Furthermore, he fasts from time to time and has cut down on food containing high calories and carbs.

While talking about the motivation behind the weight loss, Ben cited his daughter Helen as the wake-up call. He even shared,

Having Helen made me want to be healthier so I could be around a lot longer and see her grow up and see her whole life.

Also, his maternal grandfather died of heart stoke, whereas his dad has gone through multiple open-heart surgeries in the past. So, there's no denying he wants to live a healthy life for the sake of his beautiful family.

As per Romper.com, Ben's reported net worth is at least $5 million. As evident as it is, his appearance in the show, Home Town (2017), significantly contributed to his financial success.

Talking about his assets, he co-owns a beautiful 1925 Craftsman-style house in Laurel, Mississippi. Alongside peaking financially, Ben has used his fame and wealth for humanitarian causes as well.

For instance, on 13th April 2019, he participated in the fundraising campaign for the Friends of Children's Hospital located in Jackson, Mississippi.