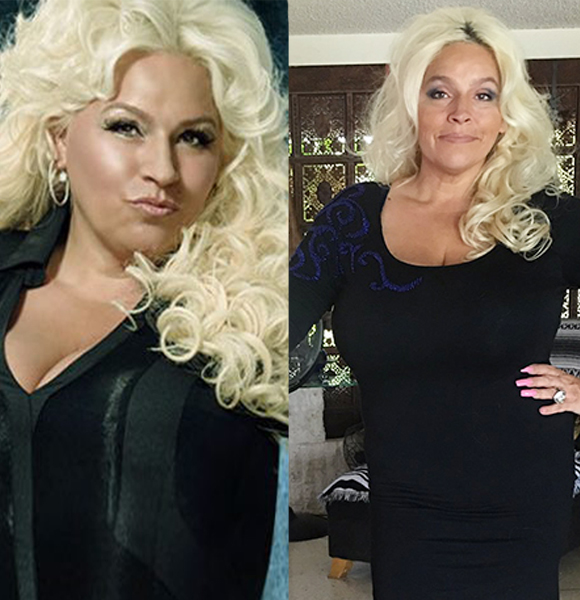 On 26th June 2019, Beth Smith (Chapman) passed away after succumbing to stage four cancer. She was 51 years of age. Gillian Sheldon, the family spokesperson, told CNN that the reality star died in a Honolulu Hospital, surrounded by her kinfolks.

Days before her tragic death, Beth got placed in a medically induced coma at Queen's Medical Center in Hawaii. The paramedics had initially rushed her to an intensive care unit.

A mournful Duane Chapman, the late reality star's husband, took to Twitter and delivered the devastating news. On the same day as his wife's passing, he tweeted:-

"It's 5:32 in Hawaii, this is the time she would wake up to go hike Koko Head mountain. Only today, she hiked the stairway to heaven. We all love you, Beth. See you on the other side."

Via Twitter, Duane and Beth's daughter, Bonnie also mourned the tragedy. In her tweet, she professed happiness with being able to call the deceased star a mom.

WGN, the network housing a series starring Beth called Dog's Most Wanted, too released a statement mourning its star's death.

The news of Beth's passing came two months after she got admitted to - and later released from - the hospital. Reportedly, she had given up consuming medications prescribed by the doctors.

Beth of the bounty hunting series Dog The Bounty Hunter was a remarkable person. But the late wife of the acclaimed bounty hunter Duane "Dog" Chapman had her share of law enforcement problems, family problems and health scares.

The reality show star, who struggled with weight issues all her life, suffered a major health scare after she got diagnosed with throat cancer.

But, not only did she beat the 50:50 odds of surviving cancer but also shed pounds. After announcing being a cancer-free life in 2017, the condition returned in 2018. She never recovered from it.

Beth struggled with weight issues all her life. She with a busty figure decided to undergo an extensive weight loss program after the wraps of the spinoff to hit show, Dog and Beth on the hunt in 2015.

You May Also Like:- Brittany Cartwright Today, Age 29, Unveils Weight Loss Secret! Before and After Pic Screams

She decided to swap TV with outdoor sports and with a firm resolution, disciplined and had a healthy diet.

And the result was spectacular!

Not only did Beth look better than she had ever looked before, but the star also seemed much happier in her newest avatar. Beth shared her photo on 7 August 2016 flaunting her toned down body and even spoke of her delight at her date night with husband Dog Chapman. Her new curvy body was the result of a healthy and fitter lifestyle. With her new diet plan and weight loss workout, she lost 50 pounds.

However, Beth was not one to be away from troubles; as the actress, after her weight loss, suffered from a significant health attack.

Barely a year after being pictured going on a date night with her husband and looking as healthy as she had been, Beth experienced a massive shock when she got diagnosed with stage 2 throat cancer in 2017.

Speaking about her diagnosis, the first thought she said she had "was death." The star, in AETV's 2-hour-long offering Dog and Beth: Fight of their Lives aired back in November 2017, talked about her fight with cancer, where she stated:

Beth was given a "fifty: fifty survival chance" and went under the knife to remove a massive tumor in her neck the same month she was diagnosed, and she later underwent extensive medication and rehabilitation. To her delight, she had a successful surgery which resulted in a complete cure of the disease.

Speaking after her successful treatment of the killer disease, she claimed that she had to remain stable in the face of the calamity, and duly did that as well. Speaking to PEOPLE before the release of her 2-hour special, she said:

“I knew I couldn’t let it take me over. I had to keep moving, every day, moving forward. That’s all you can do when you get a diagnosis like this. So I take it each day at a time. And I’ll fight it with all that I have.”

Besides doctors, her husband was another reason behind her successful rehabilitation; he stood firm and stood by her side during the difficult times, providing her with all the mental support she required.

He affirmed that he had vowed to stay by her side until her death and was keeping up the vow that the couple exchanged during their marriage in 2006. Talking to The Dailymail back on November 2017, he expressed:

"When we made a pledge many years ago I said I’d love her in sickness and in health until death do us part. And that truth has really, really come alive in my mind. And I have to stand on that; I gave her an oath that I would love her forever. And thank God it’s not till death do us part at this point."

Again, her husband turned out to be the most inspiring and supportive person in her life as her battle with cancer has started yet!

After her complete cure of the death thriving disease, cancer returned in Beth's life. Beth got rushed to the Cedars-Sinai Medical Center in Los Angeles after she found it challenging to breathe overnight.

While undergoing the emergency surgery on 27 November 2018, the doctor found a large mass in her throat and confirmed that cancer had returned. During all the time, his husband of 30-years was by her side, praying for the best.

News of their surgery came after nearly a year that the couple had announced that Beth was cancer free.

Moreover, her family and friends had great faith in her speedy recovery after seeing Beth continue to be "very strong, active and healthy."

Beth & Husband Before Her Death

Before Beth's tragic passing, she and her husband Dog lived in the Oahu Island in Hawaii and enjoyed their married life along with their two kids, a daughter, and a son.

Beth and Duane, who got accused of abusing their grandchild by his father Travis Mimms and were fighting for the custody battle of the kid in 2011, didn't talk about the incident. The boy eventually grew up, kept out of the spotlight, and is living a low-key life.

Discover:- Who Is Jack Monroe Partner? Engaged & Getting Married - Soon?

Further, Duane's daughter Lyssa Chapman, who had earlier falsely accused her father of raping her also found the love of her life. Lyssa, a lesbian, is currently in a committed relationship with a woman named Leiana.

Despite not hugging the limelight, the couple was active on Instagram and Beth's Instagram is still embroidered with her happy moments with her husband Dog, her pet dogs, and her kids. Beth got elected as the president of National Bail Bonds Association in 2016, a position she still occupied until her passing. And the wife and husband duo actively advocated their stance against the abolition of the paid bail system.

Similarly, Beth addressed the fear about her and her family's safety in the wake of Volcanic eruptions in Hawaii. Beth uploaded a photo on her Instagram detailing that the island they were residing in was not the one experiencing volcanic eruptions, drawing a collective sigh of relief from her well-wishers.

Beth and Duane also celebrated their first anniversary after she got diagnosed with cancer. The couple, who got married on 20 May 2006, enjoyed their 12th anniversary and Beth even took to Instagram to mark their auspicious occasion where she wrote,

“We made it through another tough year. Looking forward to our anniversary.”

Moreover, on 18 June 2018, she shared another Instagram post to wish her daughter, Cecily on her 25th birthday.