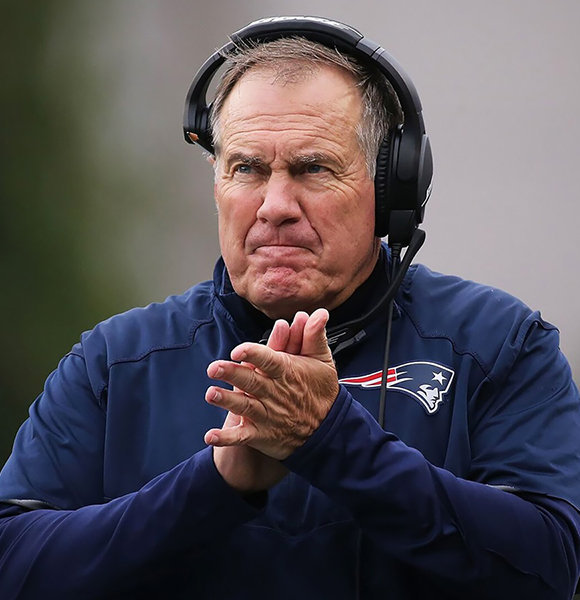 Talking about coaches and legacies, Bill Belichick is one of the most authoritative NFL coaches in the history of American football who followed his father's footsteps, and his sons are doing the same.

With a net worth of millions and children walking along his footsteps, there is a constant question about the coach's wife and his married life.

Bill Belichick was married to his high school sweetheart turned spouse Debby Clarke in 1977; his personal life became an enormous mess after being accused of cheating on his first wife Debby Clarke with a woman named Sharon Shenocca. Hence, the couple ended their marriage and divorced in 2006 after 28 years of togetherness.

Soon in 2007, at a nightclub in Palm Beach, Florida, the head coach met Linda Holliday. The couple instantly fell for each other and started dating the same year.

Even after 15 years of togetherness, the duo has yet to comment on anything about marriage, and it seems like they are very happy with how things are going. With his flourishing relationship, the above snippet of their happy moment was shared on valentine's day by Linda Holliday, captioning "Happy Valentine's Day to the man that still melts my heart and makes me laugh after 15 years! You stole my heart a long time ago! I found love when I found you!"

As the couple constantly receives tons of blessings, a question always arises 'are Bill and Linda married?' Well, for now, the answer is the couple is not married, but the fandom cannot wait for the wedding bells.

Linda, all dolled up as a beautiful bride and Bill a handsome groom walking on a new journey as husband and wife, the wedding ceremony will surely be top-notch.

Apart from his happy relationship, Bill has been extremely blessed with five children.

His current girlfriend Linda was previously married and even nurtured two twin daughters named Ashley and Kate Huss from her past relationship. As Bill and Linda have come together, they take care of each other's children and fulfill their parental duties whenever they get a chance. Among all his kids, sons Brian and Stephan from his then-wife work alongside his father as safeties assistant and defensive coaches, respectively, for the Patriots.

Like Bill's wedding speculations, his sons' weddings are also the talk of the town. Bill and his first wife's son, Brian Belichick, is married to Catherine D. McLaughlin, and their second son, Stephan Belichick is married to Jennifer Schmitt.

Despite being in the public eye their whole life, the couples have successfully kept their married life under wraps.

Unlike the father-son team, Bill's daughters from his girlfriend Linda are making a name for themselves as icons in styling, photography, and modeling. Likewise, Amanda, his daughter from his ex-wife Debby is now an American lacrosse coach, currently serving as the head coach of the women's lacrosse program in Worcester, Massachusetts called 'Holy Cross.'

Bill's children are surely stepping in their family's legacy by being a part of the sports industry and doing great work as coaches. Taking about coaching, how did Bill exchange his expertise for a massive net worth?

What Is Bill Belichick's Net Worth?

Considering the pedigree of experience Bill brought to the pitch, he accumulated a whopping $12 million alone from his coaching job for the Patriots. Due to his overall coaching accolades and trophy-winning seasons with different teams, Bill's net worth has climbed up to a staggering $60 million.

The start of this massive chunk of wealth happened after a few starting stints in coaching in 2000; the 69-year-old was traded from New York Jets to the New England Patriots. As a coach, Bill has won three championships for the Patriots, making him a legend and one of the highly-rated coaches of this era.

After only two seasons with the team, he was named the NFL Coach of the Year in 2003.

His instinctive subs and magical tactical changes were undoubtedly the traits he received from his father.

As of recently, Bill completed his 46th season as an NFL coach and his 22nd season as head coach of the New England Patriots. He has 311 victories making him third-all time coach with a winning percentage of .678, ranking second in all of NFL history.

Born as William Stephen Belichick on 16 April 1952 in Nashville, Tennessee, Bill was raised by a Croatian father, Steve Belichick, and an English mother, Jeannette Belichick, in a family of three.

Growing up, he loved football and often watched his father Steve, who was an NFL coach. During college, he played for the Wesleyan University football team.

Unfortunately, he could not capitalize on the opportunity despite his muscular build, sporting knowledge, and height of 5 feet 11 inches (1.8m). Therefore, Bill transitioned from playing to coaching.