Bria Myles With Multiple Rumored Boyfriends; Who Is She Dating In Real? 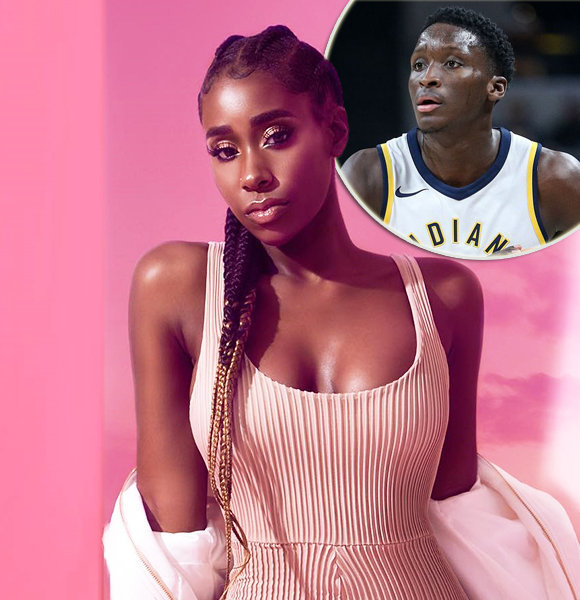 American actress Bria Myles, who rose to fame as a video vixen in the mid-00s, is a celebrity who timely grabs the spotlight for her voluptuous body and her fluctuating love life.

With her timely changing love status, Bria has attracted excess attention regarding her love life.

That's why today, we have chronicled Bria's love life to find out if she has found her Mr. Right or is still tangled in love mess!

The ravishing model Bria Myles has been romantically linked with plenty of men that has tolled on her A-list dating resume.

Previously in 2008, Bria was dating Canadian rapper, Drake. The two were spotted in numerous romantic getaways time and again. Interestingly, Drake even changed the name of his 2009's album So Far Gone as Bria interludes as a tribute to the model.

Drake later acknowledged that the record was indeed about Bria in an interview. The Started From The Bottom rapper quipped:

“I was smitten over this girl from L.A. and I started writing a song about her.”

However, the couple’s relationship deteriorated as Drake rose to fame and the duo separated in 2010. With that being said, Bria maintains that she and her one-time rumored boyfriend, Drake are cordial to each other now.

You May Also Like:- Mike Sherm Wiki: Everything From Age, Girlfriend To Parents, Net Worth

Later, Bria dated American actor Laz Alonso. Laz confirmed their relationship during an interview with Hollywood Unlocked Uncensored, where he accepted that they had dated for just a season before breaking up.

Similarly,  Bria was linked with Sean Newell after the pair got pictured celebrating Sean's birthday together in 2012. Bria shunned all haters for their comments about the racial differences between the couple and revealed she was happy with her boyfriend via one of her twitter posts. The couple remained silent after the event, and the buzz faded away with passing time.

After a hiatus of 5 years, the rumors about Bria and her relations again started surfacing the internet. The MTO News reported that Bria was dating American rapper Tory Lanez. They were even thought to have got engaged and were expecting their children on 25 August 2017.

But just as the olden times', no more shreds of evidence to fortify their dating rumor came out in the media. Additionally, Bria was also rumored to be dating Indiana Pacers NBA star Victor Oladipo in December 2017. She was pictured supporting Indiana Pacers during their extra time win over Denver Nuggets, and later she even added a photo from the event on her Instagram captioning it "1,2 0r 47." For the latest, Bria got accused of having a relationship with rapper Rich The Kid when the wife of Rich filed for the divorce stating him to have multiple affairs. Rich's wife even leaked the screenshots of text messages shared between Rich and Bria.

But Bria has not openly talked about the accusations and is yet to spill the beans on current relationship status.

More About Bria Including Measurements, Weight & Net Worth

Bria, whose total net worth of Bria is estimated to be around $250K, first rose to fame after appearing in the Kanye West Rhymefest video, and since then, has numerous video credits in her name. Prior to getting her big break in Kanye's video, Bria acted as a backup dancer for famous RnB star, Nelly’s group.

Most recently, she made a cameo appearance in the music video for Cardi B single titled Backin' It Up. The music video features Bria get pursued by rapper Pardison Fontaine inside a Pizzeria.

The Instagram star with 1.4 million followers is famed for her curvaceous body that has measurements 34-23-40 along with a weight of 61 KG. She has also used her massive Instagram following to shine a light on the topic of negative stereotype labeled against black women. Also, she routinely speaks about the discrimination she has to face for being a dark-skinned woman in the modeling industry.

Moreover, Bria also underwent cosmetic surgery for her breast enhancement, that can be spotted on her before after photos. Admitting the operation during a radio talk back in 2014, Bria affirmed that she had not gone under the knife for any other procedures.