By LRU Writer | On: November 10, 2019
American model and host of the E! network's popular travelogue series Wild On, Brooke Burke-Charvet, who also survived cancer, is now living a fascinating life with her French singer and model husband David Charvet. And if you are curious to know about Brooke's life behind the camera, then you have come to the right place. 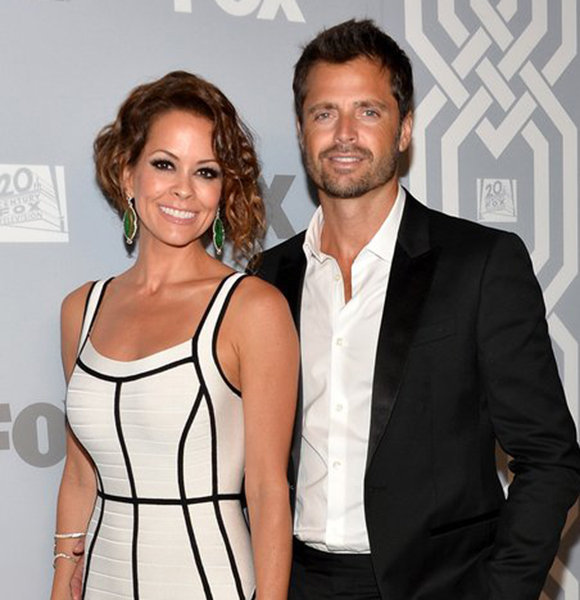 American model and host of the E! Network's popular travelogue series Wild On, Brooke Burke-Charvet is also a cancer survivor. Brooke, who once led a fascinating life with French singer and model husband David Charvet, has gotten over both her illness and former spouse.

Read along about her cancer story along with her existing relationship with her ex-husband!

Making their relationship official, Brooke Burke and boyfriend real state tycoon Scott Rigsby made a grant appearance as a couple in the red carpet on 6th November 2019.

Brooke was gushing about Scott for the entire time and took no delay in officiating the relationship. The American model-host talked about how wonderful her new boyfriend was. Gushing about him at every chance she got, the gorgeous lady and her handsome stud looked wonderful together. She talked about how great he is as a father. Well, he does have two children from his previous relationship. When asked about how her own kids responded to Brooke dating Scott, she only gushed and told them that they really like him.

The relationship was official, even before their debut and interview as a couple, the two could be seen goofing around. Particularly during their time in Mexico, when Brooke and Scott were cozying around at the  Nobu Hotel Los Cabos.

The Dancing with the Stars co-host Brooke and her ex-husband & the Baywatch star David Charvet exchanged vows on 12th August 2011 in the French Caribbean island of St. Barts in front of their children. However, she revealed that they did not tell anyone about their wedding, not even their mothers.

Similarly, a source concurred saying that then-newlyweds and their children were an incredibly tight unit and that they were very much in love. The source further added that David adored Brooke and their family and that they couldn't imagine being with anyone else. Brooke, who enjoys a net worth of $25 million, had been together with David for almost eleven years before their divorce. They share two children, daughter Heaven Rain, and son Shaya Braven. The couple, who once rejoiced married life, got engaged back in August 2006.

After six years as a married duo, in April 2018, Brooke announced her split from her then-husband David. Reacting to the rumors about their divorce, the former Dancing With The Stars champion penned a poignant essay on ModernMom and discussed the separation.

In the said essay, she revealed that the pair had separated long before the divorce rumors began circulating. Professing utter sadness over the path that their relationship took, she then asserted that there was nothing sensational about the dissolution.

Another Amicable Split:- Find Out Why Corey Bohan & Audrina Of The Hills Finalized Their Divorced

After the divorce announcement, the mother of four clung to the arms of a close friend and actor Oliver Trevena. Then in September 2018, she got photographed kissing a mystery man.

A year after the publication of the ModernMom piece, in May 2019, Brooke sat down for an interview with US Weekly wherein she opened about her relationship with David. In her own words:-

"We have a very beautiful, deep relationship that’s valuable to me, so I hold him in very high regard."

In the very interview, the former Playboy model revealed her plans to spend the 2019 Mother's Day with David.

People might not remember, but Dave is Brooke's second husband.

Before rejoicing married life with Dave, she had shared a stumbling relationship with Plastic surgeon Garth Fisher. She and her first husband Garth got married in 2001 and got divorced after almost four years in 2005

A former couple of Brooke and Garth together share two children, Sierra Sky, and Neriah. In an interview with PEOPLE, she stated that despite the divorce, they have a great deal of respect for each other and remain committed to raising their two children together.

In July 2012, Brooke shared in a post that she had been ignoring her doctor's recommendation to undergo a thyroid ultrasound after the doctor found a lump in her neck during her routine exam.

Triumph Over Cancer:- Vanderpump Rules' Ariana Madix, 33 Shares How Her Cancer Got Removed

Brooke then shocked the fans by revealing in a video that the doctors had diagnosed with thyroid cancer. She further explained in the video,

I feel really good. I've never felt better. That's what's so crazy about this whole thing, and you never ever think that some tiny nodule, something that I didn't even know was going on in my body -- I went for a regular physical, and that's how I discovered this.

Just after a month after being diagnosed with cancer, she successfully underwent thyroid surgery in December 2012, and she proudly showed off her scar along with her incredible figure later in January 2013. After a couple of years of recovery, in April 2014, Brooke uploaded a video on YouTube sharing a 'seven moves' exercise video for a better butt. In March 2018, she took it to her Instagram sharing a workout video for her fans and followers.