Sophie Turner & Joe Jonas: Details On Their Relationship Till Now

By LRU Writer | On: February 13, 2020
Sophie Turner said their wedding vows in a surprise wedding that was held at...is married to Joe Jonas...Severable notable celebrities including her husband's famous brothers...The two started dating back in December...After dating for a few about a year, they finally engaged in...The X-Men star's parents are...reports about her pregnancy 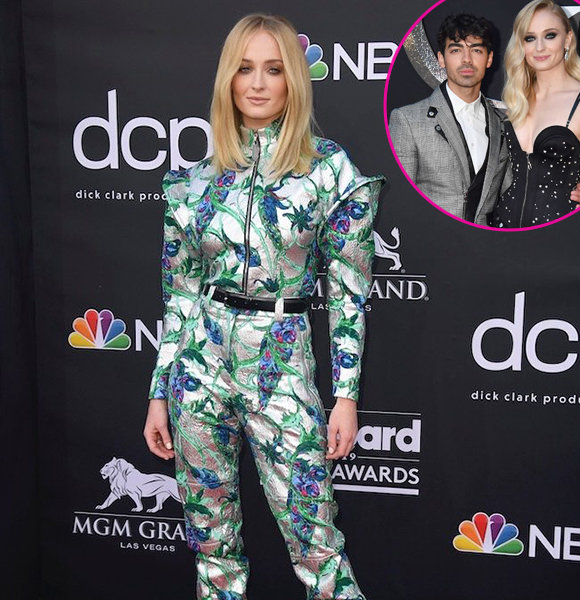 Actress Sophie Turner is best known for portraying the role of Sansa Stark in the HBO hit TV show, Game Of Thrones (2011). It became a breakthrough role in her acting career, and several awards recognized her talent.

Sophie is married to Joe Jonas.

The two started dating back in December 2016. After dating for a few about a year, they finally engaged in November 2017. Both of them confirmed the news of their engagement through their respective Instagram on 15th October 2017. Interestingly, both their posts featured a picture of the diamond engagement ring.

The actress captioned the picture with "I said yes," whereas her partner wrote, "She said yes."

Finally, on 1st May 2019, Sophie tied the knot to Joe. They said their wedding vows in a surprise wedding that was held at Chapel L'Amour in Las Vegas.

During the ceremony, country stars Dan and Shay played the song, Speechless, in the background as Sophie walked towards the aisle. An Elvis impersonator officiated Their wedding.

Severable notable celebrities, including her husband's famous brothers, Nick Jonas and Kevin Jonas, were among the guest at their wedding. Moreover, Priyanka Chopra, Nick's wife, served as the maid of honor. Sophie Turner and Joe Jonas during their wedding ceremony on 1st May 2019 at Chapel L’Amour in Las Vegas (Photo: justjared.com)

The news of their wedding first reached the public through DJ Diplo as he posted the videos through his Instagram.

Nearly a month after the first wedding, Sophie and Joe remarried on 29th June 2019. Their second wedding was held at Château de Tourreau, in Sarrians, France.

During the occasion, Sophie donned a formal traditional white dress featuring a skirt with styled sleeves and brocade patterns.

Interestingly, this time, Maisie Williams, her on-screen sister from Game Of Thrones and best friend, was the maid of honor.

On 12th February 2020, entertainment news site Justjared.com first published a report claiming that Sophie was pregnant with her first baby.

The article even issued a statement from their sources that read,

The couple is keeping things very hush hush but their friends and family are super excited for them.

Also, another statement from another source said,

Sophie has decidedly been choosing outfits to wear on and off the carpet to accommodate her changing body.

However, when The Hollywood Reporter reached out for confirmation from the pair's representatives, they declined to comment on it.