By LRU Writer | On: March 02, 2021
Cade Foehner made headlines as a rising singing superstar...he hearts of many out there, Cade...the duo went on to share a beautiful picture of them kissing and on...the pairs happy moment took place in the same place where they had first met. During a trip to Los Angeles for...Speaking of a few of his works in 2019 hits like...new tours or performances are fixed from that... 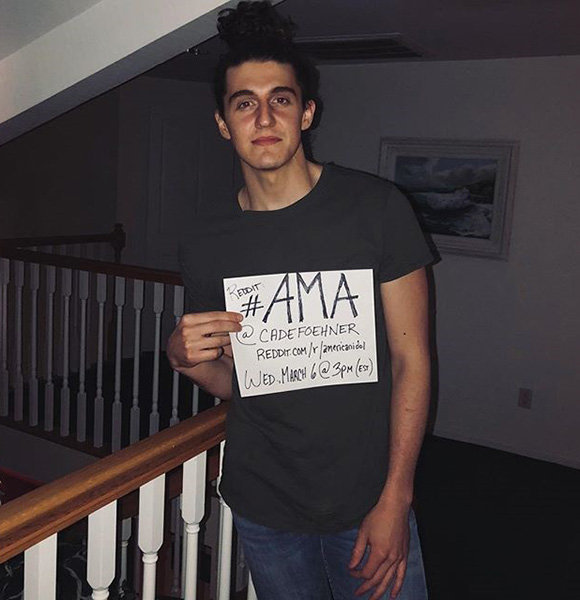 One of the top five contestants of season 16 of American Idol, rock singer Cade Foehner made headlines as a rising singing sensation from the show.

Following a power-packed presentation and appearance on The Voice, Cade became successful enough to garner the attention of thousands in a short time. Increasing his popularity as a singer, his presence on the hit shows allowed him to amass a fanbase of more than 280,000 on Instagram alone.

For many fans, a celebrity's personal life remains a hot topic of discussion, and Cade's remains no different.

Breaking the hearts of many out there, the Texas native is married to his singer girlfriend and fellow American Idol contestant, Gabby Barrett. The duo hit it off in the series itself.

The couple first started dating on 15 March 2018 and went on to date for over a year before getting engaged. Cade and Gabby announced the news of their engagement via Instagram. On 22 March 2019, the duo went on to share a beautiful picture of them kissing with Gabby flaunting a beautiful engagement ring.

Interestingly the pair's happy moment happened at the same place where they had first met. During a trip to Los Angeles for pre-marital counseling and to visit their pastor, the two accidentally stayed in a hotel where they first hung out during the American Idol days.

Trying to surprise his beautiful girlfriend, the rock singer went down on one of his knees during a photoshoot. Gabby knew what was about to go down; her answer was a definite "Yes." The photo shoot turned into a substantial engagement ceremony for the two.

The lovebirds didn't wait long after the proposal. Seven months after their engagement, the two decided to get married in October 2019. The wedding took place in front of 100 guests, and the venue was Union Spring, Garrison, Texas. The wedding consisted of a small group because the bride and groom wanted a simple, intimate wedding with only close friends and family.

Born on 24 July 1996, Cade Foehner is the son of mother Kelly Menefee Foehner. His dad's name, however, is missing. Cade is not a single child in the family; he grew up alongside sisters Blaine Foehner Goodwyn and Krystina Foehner Lout in Texas, USA.

Further, his entire family was there to commemorate his wedding day. Sharing the happy moments were his father, mother, and sisters.

After being a succesful competitor in Americal Idol, Cade has garnered not only fame but career opportunities as well.

Few of his works in 2019 include Southern Hallelujah, Baby, Let's Do This, Crown, Breathe Out, and Jungle Love. If the hits were not enough to showcase his success, he also tours around parts of the state to sing his beautiful songs.

You May Like:- Mitchel Musso Girlfriend, Gay, Family, Net Worth

As of late, Cade is set to make an appearance on 21 November 2019 in Knoxville, Tennesse. While no new tours or performances are fixed after that date, with his charismatic voice, more would surely line up.