Is Casey Webb Age 42 From 'Man vs Food' Married? Who Is His Wife?

By LRU Writer | On: January 30, 2019
Man vs Food's Host Casey Webb has a love story of his own away from the cameras and food challenges. Casey previously shared a loving romance with his former girlfriend...they dated back in...their first picture together surfaced back in...the pair appeared together for...until their last picture in...since then the duo parted ways... 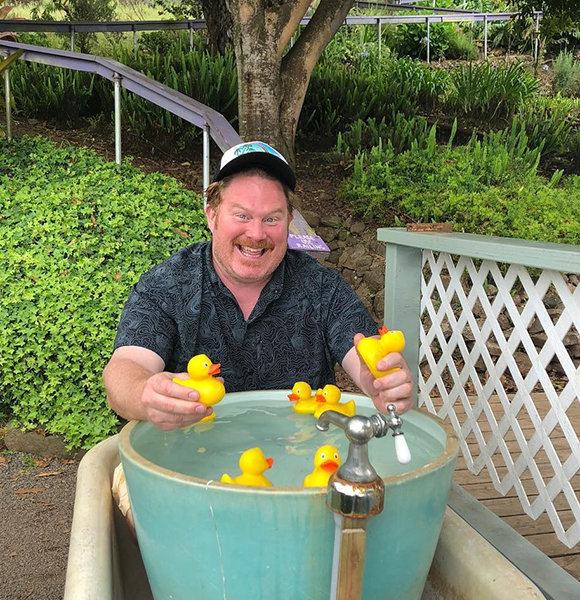 As much as it's surprising, the film actor earns big bucks from his eating abilities, which rarely comes as a part of the job. With insane food challenges lined up for the host of Man vs Food, Casey Webb is filling his stomach while adding numbers to his bank balance.

Even though Casey was first criticized for replacing former Man vs Food host Adam Richman, he eventually garnered admirers for his work. While he gained popularity, his love life also became the topic of the talk.

His admirers were eager to know about the woman he would get married to. Well, here are the insights on his bio revealing details of his possible wife.

Casey Webb, who is also known for Keeping Up with the Greensteens, has a love story of his own away from the cameras and food challenges. Casey previously shared a loving romance with his former girlfriend Elle Dee, who goes by Instagram name @ldip0401.

Casey and Elle dated back in 2013 before Casey joined in Man vs Food. It is not known how the couple met and fell in love with each other, but their first picture together surfaced back in June 2013.

Casey posted a collage of multiple pictures on his Instagram where he is seen posing for a selfie with Elle. The pictures in the college also contained a boat along with a heart and their name initials made with wood pieces.

The couple had all smiles in the pictures as they marked their Instagram official relationship through the post.

Likewise in July 2013, Casey posted a picture with his girl mentioning Elle as his "favorite gal" in the captions. The pair took a selfie in which Elle had her arms wrapped around Casey as they posed for the picture together spending quality time at The Empire Hotel Rooftop. Through the caption, Casey wrote,

"My favorite gal and I watching fireworks in the sky."

Through the posts, the pair looked content in each other's company. Furthermore, in November that year, Casey posted a selfie captioning the picture as "post-dance romance."

Likewise in April 2014, the pair celebrated Easter together. Casey posted a picture with Elle referring her as her honey bunny. The couple looked happy in each other's presence but things turned out differently for the two. Their Easter picture turned out to be the last picture together on social media as they parted ways silently. Since then no pictures of them together surfaced the media.

As Elle is now seen with a new man, the pair might have ended things between two. However, unlike many, Casey has not removed pictures with her from his Instagram account.

You May Also Like:- Sandi Toksvig Age 60, Wife After 'Aww' Filled Wedding; Rock Solid Or Rocky?

As of now, Casey seems to be enjoying his single life all by himself. Even though he often mentions Graci Carli as his wife, the duo only share set together. However, there has not been any actual reports of them dating or Casey being involved with someone new.

Bio Reveals Birthdate And Time At Man vs Food

Casey Webb, who is now at the age of 42, celebrates his birthday every year on 27th April. Casey, who now has established himself as the host of Man vs Food, always had his interest in culinary.

He worked in restaurants since he was at the age of 15 and worked in different aspects of food until he joined Man vs Food. Casey started his career in Little Silber at Danny's Pizzeria. He even worked at Piccola Italia in Ocean Township as a general manager.

Likewise, he even the bartender at the Downtown in Red Bank. While working there, Casey landed himself with a proposal to work in Man vs Food and in no time he joined the show.

The work at the show was his dream job taking on legendary eating challenge finding America's most delicious and unique eats.