By LRU Writer | On: December 25, 2018
Renee Bargh, who continues as a co-host  “Extra,” previously shared a loving relationship with her former boyfriend...they began dating back in...They shared the romance for...until they parted ways back in...Renee was also pictured with...hinting the romance. The blonde beauty previously dated...and...As of recent, Renee is currently involved with... 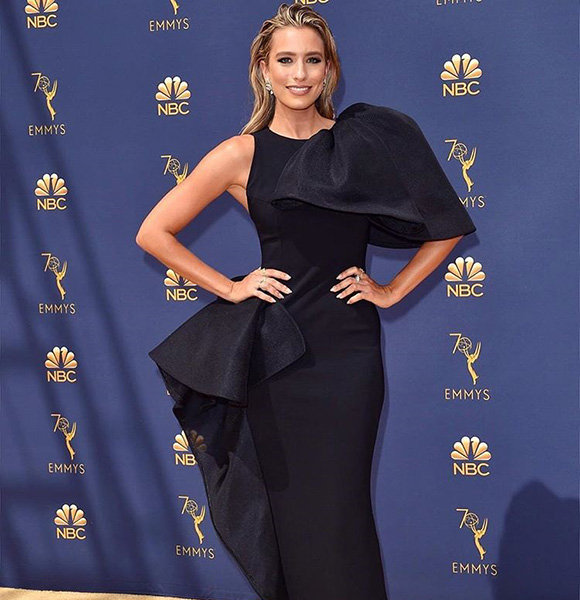 Australian Celebrity and television presenter, Renee Bargh is kissing success at the age of 32. With her Emmy Award-winning talent as a television host, Renee has become a red-carpet staple.

From interviewing big names in Hollywood to attending big events, Renee has it all under her nose. While she reaches the height of success in her career, her love life has some great stories to tell.

She once shared a longlasting romance with her former beau only to find it not surviving the thicks and thins of a relationship. Eventually, Renee found someone new in her life and they have been dating for a while now.

Wondering who the man is? Let's find out.

Renee Bargh, who continues as a co-host “Extra,” previously shared a loving relationship with her former boyfriend Josh Gibson. Renne and Josh got together and began dating back in January 2014.

They shared the romance for a year making memories but the things between the two came to an end a year after. They parted ways back in February 2015. Even after being separated, the duo remained good friends with no hard feelings towards each other.

After the end of the romance between the two, Josh was pictured getting touchy with a leggy blonde model-esque interior designer, Lucy Mack-Hancock. Just days after Renne hinted a new romance of her own.

She was pictured with Australian model and reality star Tyler Atkins. Renee posted pictures with Tyler hinting her romance with him. In a picture, Renee was seen wrapping her arms around Tyler's shoulders while mentioning him as her "fav human." She captioned the picture writing,

'My fave new LA hang out, with my fave human @tylerockit @eplosangeles.'

Even though she seemed content with Tyler, seems like nothing much yield out from it as she now has someone new in her life. The blonde beauty previously dated Joe Jonas and was also involved with long-time dancer beau Shannon Holtzapffel.

Dating Someone New - Getting Married?

As of recent, Renee seems to have found someone new in her life. There have been reports that she is currently involved with Set It Up star Glen Powell.

According to an insider, the duo has been secretly seeing each other for six months now. It is not known when the romance sparkled between the two but the things seem to be really comfortable for the pair.

The same insider also added that Renee and Glen have been living together taking their romance onto the next level. Likewise, the dup even celebrated Glen's 30th birthday together. While their admirers claim of their relationship, neither Glen nor Renee has yet made any statement of their togetherness. Likewise, their romance is not social media official just yet.

You may also like: After Putting A Show For Gay Fans, Is Glen Powell Budding Dating Relationship With Fellow Actress?

As in past, Glen had was involved with Vampire Diaries actress Nina Dobrev while having his name tagged along with his costar, Zoey Deutch.

Renee Bargh, who has cemented herself as one of Australia's visible talent, made her way to the top through her ultimate determination. Being raised under the wings of her family who supported her dream, Renee found her way into Extra while she was working for local music station Channel (V).

Her first interview for Extra with John Travolta landed her with a three-year contract with the show. Since then, Renee has been attending Academy Awards along with blockbuster movie premieres and interviewing Hollywood A-listers as a part of her job.

Her current work is not only satisfying to her but also lands her big buck adding to her net worth. Indeed, at the age of 32, Renee has established herself as a known and talented presenter.