By LRU Writer | On: September 13, 2019
Australian beauty, Cate Blanchett  was born to June , a teacher and property developer in Australia and Blanchett, Jr., an American advertising executive, on may 14 1969. Her dad died of a heart attack at a tender age of 40. Since then, Cate along with her elder bother and younger sister have missed the guiding hand in their shoulder . 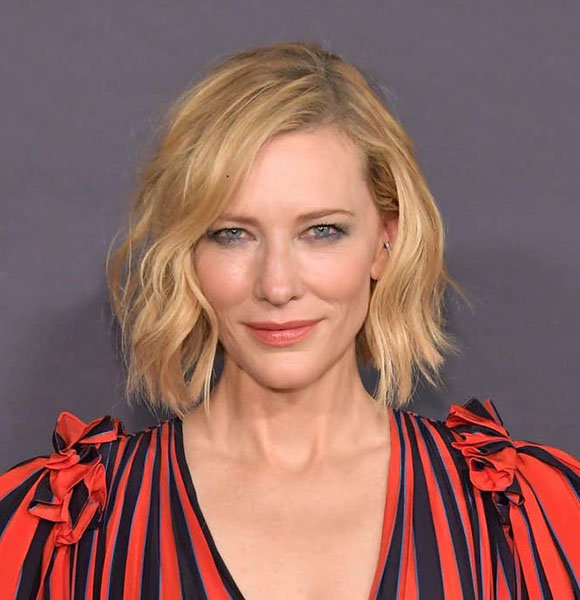 While blonde beauties are often stereotyped as "dumb," no one can say the same about Cate Blanchett.

The Australian actress has not only survived in Hollywood for decades, but she has also become a leading lady with many awards and accolades under her belt.

Her success did not follow because she was fame-hungry; it came because of a determination to outdo her flair. The artist of 5 feet 8 inches (1.72m) had earlier worked in theatre for an enduring period and even bagged Helpmann Award for the Best Female Actor in a Play, four times.

Her dedication to acting over the years proved the ancient saying true, "People who shine from within, don't seek the spotlight."

The Australian beauty was born on 14 May 1969.  Her mother, June, was a teacher and property developer in Australia. On the other hand, her father Blanchett, Jr., was an American advertising executive.

Unfortunately, he died of a heart attack at a tender age of 40.

Since then, Cate, along with her elder brother and younger sister, have missed a father's guiding hand on their shoulders.

Unlike many actors who made it to the industry, Cate was diligent in her profession as she flew abroad to take acting classes. In pursuit of her acting career, she dropped her degree in Economics at the University of Melbourne. Nevertheless, following her passion, she secured a Bachelor's degree from the National Institute of Dramatic Art in 1992.

The versatile actress further stretched her skills entering the showbiz and taking up demanding roles in the 1998 movie Elizabeth. Her career reached new height with her role as Galadriel in The Lord of the Rings franchise.

Cate has not only been a box-office, but her acting performances has also been well honored. In 2014, she won the Oscars in the Best Actress category for her role in the film, Blue Jasmine.

In recent years, people also know her as Hela from the blockbuster 2017 movie, Thor: Ragnarok.

Through her perseverance in acting, Cate has established herself successfully, not only in Australia but on the international platform.

Even at the age of 50, she is still a patron of the development charity SolarAid and Sydney Film Festival. Also, she hasn't held back, serving as an ambassador of the Australian Conservation Foundation.

Cate Blanchett is happily taken and very much in love with her husband, Andrew Upton. Andrew is a producer and a writer, recognized for Carol (2015), Stories of Lost Souls (2005), and Babe (1995).

However, the first impressions went entirely wrong for the couple when they first met on a movie set. Andrew thought Cate was aloof, and she thought he was arrogant. As luck had them, they got to know each other better at a party over a poker game and hit it off right away. Cate Blanchett with husband Andrew Upton at an event in Sydney (Photo: bustle.com)

The duo got to know each other for only about three weeks, after which they got married in 1997.

The pair went on to have four kids together, including three boys and an adopted girl. Their eldest son, Dashiell John Upton is now 17 and their second child Roman is 15 years old. Younger to the two boys are their son Ignatius Martin and daughter Edith Vivian.

Celebrating their marriage's longevity, Cate and her husband Andrew celebrated their 22nd anniversary in 2019.

Regardless of her real-life fairytale marriage with her husband, the actress believes love has no gender, and it can't either be termed as gay or straight. She had multiple lesbian relationships with women in the past. The relations, however, weren’t sexual.

And, Cate didn't need to experiment with her sexuality as she eventually found her dream man.