By LRU Writer | On: July 05, 2021
Michelle Rodriguez was almost on the way to making him her husband but the religious...away from being kissed by her rumored lesbian partner...pair dated from June to August of 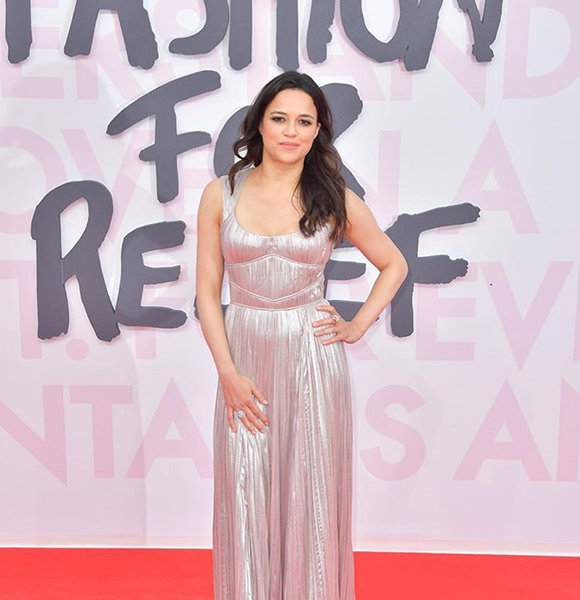 Fast and Furious star Michelle Rodriguez has tasted her share of relationships with both men and women alike. Although it took the actress a few years to open up about her flexible sexuality, her list of past romances made it apparent to viewers.

Michelle's movie roles were also a crucial factor in the initiation of gay rumors surrounding her. But there's no need to get deeper into her sexual preferences as her relationship history says it all.

The artist's earliest known relationship is with a Muslim boyfriend from back in 2000. She was almost on the way to making him her husband, but the religious differences between them led to their break up.

A year later, she dated actor Vin Diesel, her co-star from the Fast & The Furious franchise. Their relationship lasted for only a year, but the two continued to remain on good terms and went onto appear alongside in several movies together.

Her attraction to co-star didn't end with Vin. In 2003, Michelle started seeing actor Colin Farrell, her co-actor from her movie, S.W.A.T.

After a few months of the relationship, she moved on to date another co-star from the same film. This time it was Oliver Martinez, who played the role of the antagonist in the movie.

Rumors of her affair with the actor got out after the two were spotted kissing at P. Diddy’s yacht in France. Unfortunately, Oliver was also dating singer Kylie Minogue at that time, so the relation wasn't going anywhere.

Things took a more exciting turn in 2003, as the performer started showing interest in the same gender. Rumors surfaced that she was dating adult star Jesse Jane.

On top of that, in 2006, she started forming an intimate relationship with actress Kristanna Loken. The pair had met one another while working on the movie BloodRayne.

This relationship lasted about a year, and she succeeded in keeping her personal life lowkey for about almost six years. In 2014 though, her rumored relationship with model and actress Cara Delevingne created quite a buzz. Michelle was spotted getting intimate with Cara at a basketball game on 7th January the same year. Michelle Rodriguez and rumored partner Cara Delevingne get intimate during a basketball match in 2014 (Photo: YouTube.com)

However, Michelle separated from her rumored girlfriend in June 2014.

Likewise, her last known confirmed relationship was with actor Zac Efron.The pair dated from June to August of 2014.

Who Is Michelle Rodriguez Dating Now?

As of now, the 42-year-old actress doesn't seem to be dating anyone. There is also a possibility that she wants her personal life low-key. Apart from love interests, Michelle is mostly seen alongside her best friend Mohammed Al Turki in several red carpet events, including the 2019 Cannes Film Festival.

The two besties have known each other for a long time, dating back to 2015. Since then, the S.W.A.T beauty hasn't backed away from expressing love for her BFF.

Michelle Protects Her Character From The Fast And Furious Saga

During an interview with Entertainment Weekly, Michelle talked about her long fight with the Fast And Furious Team to bring depth to one of the fan's favorite characters- Letty.

She mentioned that she said yes to the 2009's Fast & Furious movie, thinking it would lead the team to try out another ending with her character being alive as there was a low representation of women in the movie series which happened.

Rodriguez also stated that she was quite surprised to find out about her character being alive after watching Fast Five's tag ending.

"There was already low representation for women period, and to take away from them the one character that was really..., I didn't think that it's what people wanted. And I was right in the end, but it just took them a while to figure it out. And I didn't find out about it until I actually went to go see Fast Five and I saw the tag ending."

Further, Michelle also talked about the progression of her character in the movie series and the recent Fast And Furious movie- F9 casts.

"We've grown so much in the last 18 years, and it's all of us, we're in it together...It's cool that they were open enough to change and to evolve with the times... I really think that 9 is doing some justice for all the girls. I'm really proud of each and every woman in F9."