Talk About Dating Goals! Chanel Iman Reaches It All With Her Affair With Boyfriend

By LRU Writer | On: June 11, 2021
Chanel Iman and her NFL boyfriend share a beautiful relationship, and it seems to be their only obligation for...became the part of each other's life after they collaborated for... power couple without any further delay tied the knot on March 2018 in... welcomed their first baby in August of the...parents announced expecting thier second child in August 2019 sharing a picture of the... 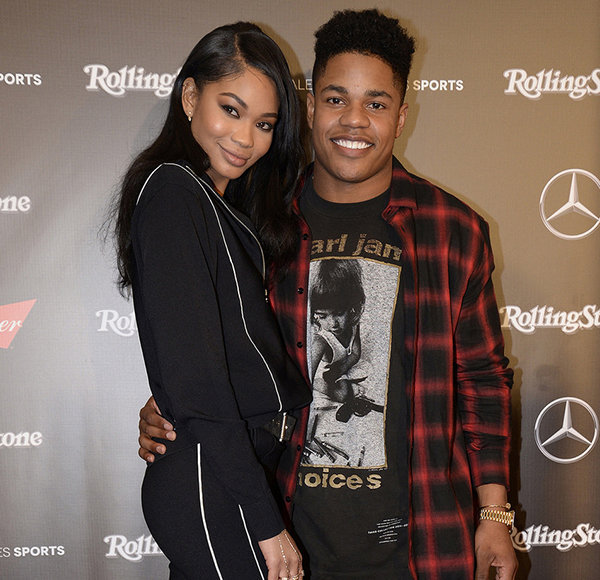 Made for each other!

Victoria's Secret Angel Chanel Iman and her NFL boyfriend turned husband Sterling Shepard share a beautiful relationship, and it seems to be their only obligation for now.

The model-athlete duo is indeed meeting every dating goal, ergo an inspiration to many young hearts. Believe us, they are apparently on cloud nine!

Well, you might assuredly be in a state of wanting to cognize all the details regarding this beautiful duo now, aren't you?

Chanel, 28, and Sterling, 26, first met at Victor Cruz's birthday party in November 2016 and precisely became the part of each other's life after they collaborated for New Era's Official NFL Sideline Collection.

The two have always been in an open relationship, and their affairs are often visible on social media. Glaringly, they even appeared in many events and public places together.

Earlier in January 2017, Chanel was spotted drumming up the public attention. She stepped out in New York City with the New York Giants wide receiver, Sterling, to promote her comedy film, Mad Families. The next notable encounter with the couple was in early August 2017 when they were out in Miami Beach, Florida. The romance between the two could be markedly seen as they went for a masked kiss while basking on the beach.

Sterling makes regular appearances on his bae's social media posts, as well. The following month after they got caught on the beach, Iman took a couple-picture dressed up in peculiar football dresses to Instagram. The caption indeed expressed how supportive she was of her beau.

The love and affection that the duo shared urged fans to believe that there was a relationship escalation for them shortly in the future.

Well, that's about the present love life, now let's take a peek at her past romantic unions as well!

Chanel didn't just have a dating affair; she indeed was in a committed relationship with the Harlem rapper A$AP Rocky. According to Page Six, the duo got engaged secretly.

This former flames got into a relationship in 2013 and later called it quits amicably in October 2014 with a decision to remain friends. The couple's busy travel schedule was cited as the reason for their split. After the split with Rocky, Iman was rumored to have initiated an affair with NBA star Jordan Clarkson.

The rumors about them dating initiated after TMZ spotted Chanel and Jordan, leaving the DBA nightclub holding their hands in May 2015. However, neither of them came forth addressing their relationship, so the matter settled down after a quick hype!

Following a long time dating relationship with Sterling Shepard, Chanel was bound to get married to the NFL star.

The power couple without any further delay tied the knot in March 2018 at Beverly Hills. The wedding witnessed the presence of close family and friends, along with a huge reception.

One good news followed the other as the couple welcomed their first baby in August, the same year. The proud mother shared an adorable picture of her baby daughter Cali Clay Shepard and baby father on her Instagram.

However, the good news did not end there for Chanel and Sterling. The proud parents announced their second pregnancy in August 2019. Just after one year of the birth of thier first-child, the two are very excited to add a new member in the family.

Gender of the Second Baby Revealed

Only a short while after the baby mama announced that she was pregnant with her second child, Chanel took to Instagram to reveal the gender of her second baby.

Through a gender reveal party at the start of December 2019, the victoria secrets model shared photos of the event that verified she was having a second baby girl.

Blessed with another baby girl, Chanel, her husband and their one-year-old daughter were photographed together sharing the happy moment. Even the entire guest at the party were dressed in pink pajamas by Chanel to make it clear that she was indeed welcoming a baby girl. A celebration of the big reveal, the party, also worked as a pampering and relaxing session. Including treats like marshmallows, sprinkles, graham crackers, there was even a multilayered enormous cake covered with beautiful white roses.

Even the mom to be could be seen resting in a fur-covered chair gently having her scalp massaged.

Born to parents China Robinson and George 'Tic' Price on 1 December 1990, Chanel is popularly known as Victoria's Secret model. Throughout her career, she has walked the runways for designers like Balenciaga, Yves Saint Laurent, and Stella McCartney, and brands like Max Mara and Versace.

Chanel, who started her modeling career at the age of 12, seems to have imported her good looks from her mother. Although the model loves both of her parents, dearly, George, and China may not share the same feeling for each other.

The beauty's parents got divorced a long time ago. While Chanel's father George is married to Jamie Price, her mother, China, lives a happy married life with TV personality Wayne Linsley.