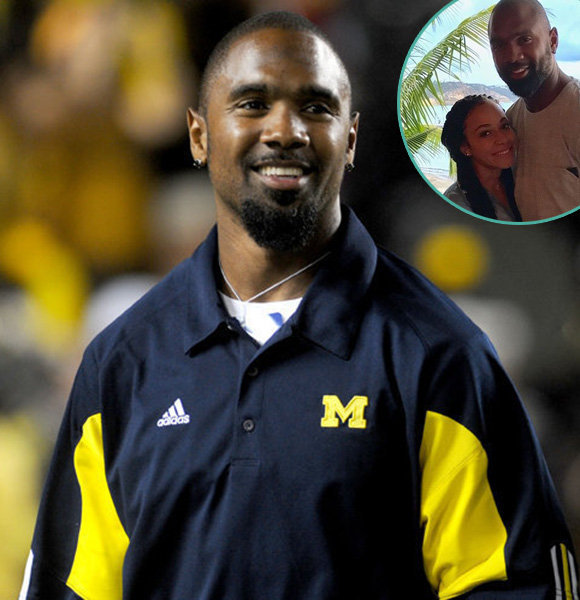 Former American footballer Charles Woodson, who now has his hands full as an NFL analyst at ESPN, had a career that many would dream of. While most us would wish to have a career like his, Charles has it under his resume.

With his fame in the world of sports, he not only excels at blocking but also excels as parenthood as he is a family man. Charles is currently married with his wife and shares almost a decade of relationship with her.

Adding to it, he is also a proud dad of his two kids. Indeed, he is sharing a delightful family life with his family of four as his social media posts suggest.

Charles Woodson, who is one of the most accomplished defensive backs in the history of football, has not only thrived in his career but also lives a prosperous family life.

See Also: Is Sofia Carson From Descendants 2 Dating Anyone? Has Cleared Rumors Of Turning Co-Star into Boyfriend?

Charles is married to his wife, who goes by the name April and have been together for almost a decade. Even though how the couple met and fell in love is not known yet they might have crossed path when Charles was putting his best efforts into his career.

However, after dating for a while, he turned his girlfriend into wife back in November 2009 which was only a year before Charles had one of his best seasons that even won him 2011's Pro Bowl.

The pair had a subtle wedding while being surrounded by their close friends and family members. However, it is not known where the duo had their wedding ceremony.

Since then the couple has been going strong with their relationship. Last year Charles and April celebrated their eight years of togetherness. Back then, Charles posted multiple pictures with his wife to mark the auspicious day of their anniversary.

Charles, who also regards his wife as his best friend, made sure to remind his wife through an Instagram post. In the post, he captioned the picture writing,

"8yrs baby girl the best thing that’s ever happened to me? I LOVE ME SOME U!! Happy Anniversary" Adding to their social media posts, Charles has not missed out on sending birthday wishes to his wife. He made sure to mark the day as he posted a picture of his wife in which she had her arms wrapped around him.

Through the caption, he revealed his love for his wife writing,

"Happy Bday to my Beautiful and Sexy Wife and the Best part of my Day!! I Love you baby cakes"

Well, he sure is the loving husband that his wife deserves and few of the times he has documented his moments with his family on his social.

While Charles's love for his wife can be witnessed through his appreciation via Instagram posts, his posts also reveal an equal love for his kids whom he shares with his wife.

He has been a pillar for his kids and has been there for them. His partnership with his kid has even won them a third place during Parent/child golf tourney which he divulged through an Instagram post. Well, they sure seem like a team.

Likewise, Charles also does not miss out on sending birthday wishes to his kids through an Instagram post.