By LRU Writer | On: March 31, 2019
Claire Holt Got Married And Turned Boyfriend Into Husband; Proudly Shows Off Her Wedding Day Moments The Vampire Diaries actress Claire Holt is a beautiful and a gorgeous lady. She has won over a lot of hearts across the world, be it with her acting or her beauty. But those who dream of dating her might have their hearts broken as she is now married to her boyfriend for a long run. So let us have a look at the wedding and take you on a journey through their relationship. 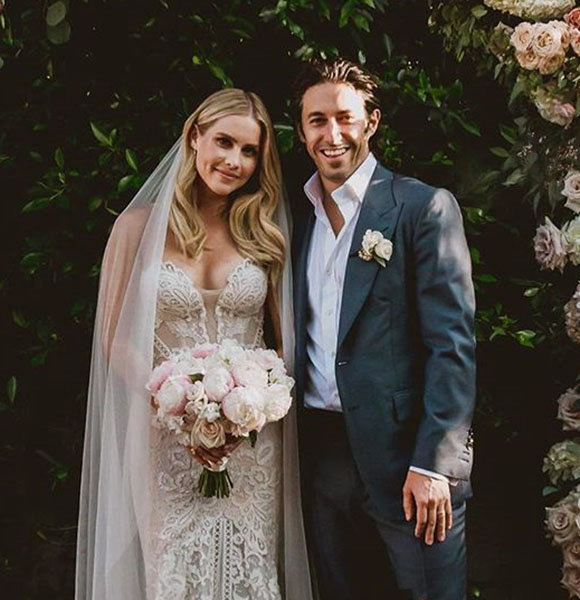 `The Vampire Diaries actress Claire Holt has won over a lot of hearts across the world, be it with her acting or her beauty. But those who dream of dating her might have their hearts broken as she is now married to her boyfriend for a long run.

So let us have a look at the wedding and take you on a journey through their relationship.

Claire Holt was married to her long-term boyfriend turned fiance now husband, Matt Kaplan since April 2016. The actress took over her Instagram to share this happy news of her getting married to Matt Kaplan. The couple started dating back in April 2014.

She was thankful to everyone who was there in thoughts and attendance for making her day special. The couple previously announced the news of them getting similarly engaged in July 2015, through her Instagram account.

However, the marriage was conducted under wraps. The blonde bombshell described the pair's decision to do so in such words.

'I think there's something really sacred about keeping that moment to yourselves. We just got married in front of our families. We had the best day!'

The sacred marriage took place after Holt revealed that she was quitting The Vampire Diaries" spinoff show, The Originals, as she wanted time to focus on the personal aspect of her life.

After the marriage, the couple showed their love to the fans and the media via their social sites. However, the couple shocked the audience after Matt filed for divorce citing irreconcilable differences on 27 April 2017 - one day before their first wedding anniversary.

Claire Holt previously dated Rafi Gavron from 2009-2010, but the relationship was always kept far from the eyes of the media and fans, so all the missing details remain a mystery to the public.

Though her first married life ended, Claire wasted no time to move on. She swirled the romantic wind with her new boyfriend, Andrew Joblon. Seven months after Claire and her husband Matt drifted their way, she got engaged to her boyfriend.

Claire and her real estate executive boyfriend announced their engagement in December 2017 via Instagram. They posted a kissing picture where Claire showed off her gorgeous ring.

Flaunting their love life all over the internet, Claire rushed to the altar with her fiance on 18 August 2018. Well, unlike her first married life, Claire's second wedding is going strong, and the couple is soon to be the proud parents to their first child.

Claire and her husband, Andrew Joblon were expecting their first child together after facing the horrible miscarriage in earlier 2018.

The Australian actress Instagrammed the picture alongside her husband and dog, Teddy on 12 October 2018 to announce her pregnancy news. She cradled her baby bump in the picture quoting her heart is bursting with happiness. Reflecting on her miscarriage, she previously went under Dilation and Curettage procedure - a surgical procedure performed after a miscarriage. She went public with her loss in March 2018 by Instagramming the picture from the hospital bed.

Claire’s struggles with pregnancy finally paid off when she gave birth to her son on 28th March 2019. Sharing an adorable picture of the baby boy in her arms, she announced the happy news to the world via her Instagram. In the post, she revealed her son’s name to be James Joblon.

Besides the new mother, her husband Andrew couldn’t hold his excitement and gushed about his hero wife on the popular photo-sharing app.

Read Also:- Nathalie Kelley Is Getting The Vibes of Parenthood From Her Dating Affair With Boyfriend! And It's Adorable

Claire and her husband love their son to death, but when The Originals actress got pregnant, the pair was sure of having a daughter. They had so much trust in their intuition that the blonde actress even though of a girl name and bought a bunch of pink baby items. But, the universe had other plans.

Claire shared an adorable video of the gender reveal on 20th November 2018 where both new parents-to-be's shocked reaction to the gender of the baby could be seen.

Stay with us for more news on Claire Holt and Matt Kaplan!