By LRU Writer | On: August 21, 2018
Wedding bells for the real estate professional, Andrew Joblon and The Originals star, Claire Holt! Andrew walked down the aisle with Claire Holt on Saturday i.e, 18 August 2018. Andrew's wife announced the couple's wedding news on Sunday via an Instagram post, which she captioned with the wedding date "8.18.18." 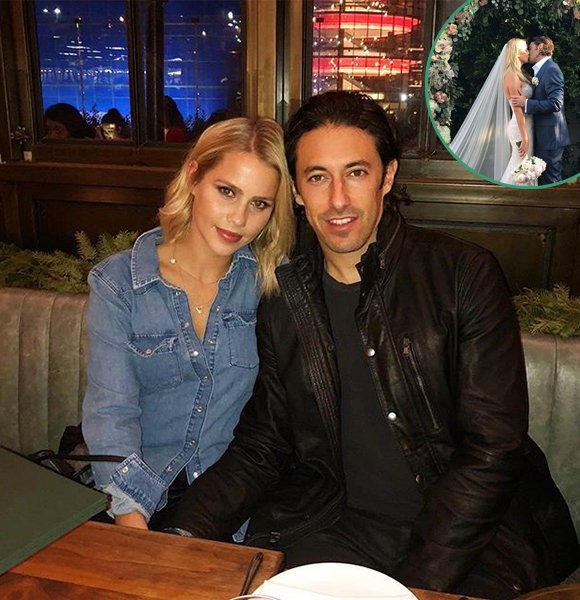 Andrew walked down the aisle with Claire Holt on Saturday i.e, 18 August 2018. Andrew's wife announced the couple's wedding news on Sunday via an Instagram post, which she captioned with the wedding date "8.18.18."

Later, Andrew shared an Instagram image of the newly wedded bride and groom sharing a passionate kiss on Sunday. Earlier, Andrew's Australian spouse had also posted a photograph of the pair along with their best man, who happens to be their pet dog, Teddy Holt-Joblon.

Andrew and his actress wife had earlier gotten engaged in late 2017. Claire had announced the news of the couple's engagement through Instagram on 3 December 2018 with a picture of the two sharing a kiss as they got engaged while also flaunting her diamond engagement ring.

In the portrait captured by the professional photographer Kelley Raye, Claire looked flawless in her strapless white wedding gown while Andrew was dressed up in a gray tuxedo. Claire had earlier suffered a miscarriage in late February 2018. She shared the news of her miscarriage ten days after the tragedy along with a picture on 5 March 2018 posting on Instagram, where she wrote,

"I took this photo 10 days ago, as I waited for surgery after my sweet little baby lost its heartbeat. I sent it to my fiancé in the waiting room to show him that I was ok. I wasn’t. I’ve never felt more broken in my life. It breaks my heart to think that losing a baby feels like something we have to keep to ourselves. Why is it any different than the death of a loved one? How is it any less meaningful? Here is what I have learned as I begin to crawl out of the dark hole: support is everything. I could not have survived this without the unconditional love of my partner. Despite his pain, he was my rock and my safety net. I will never know how to thank him."

Claire had gotten engaged to Andrew eight months after her separation from former husband. Claire was previously married to film producer Matthew Kaplan in April 2016. Her ex-husband had filed for divorce citing irreconcilable differences in 2017, one day before their first anniversary.

The news of Andrew and Claire being involved in dating first surfaced in July 2017 when she posted pictures of the two enjoying their romantic getaway in Italy.

You May Also Like:- Tej Lalvani Net Worth Justifies Lavish Wedding With Wife; From Aisle To Business Boom

Before dating Claire, Andrew had previously dated Gone actress Amanda Seyfried. During their time as a couple, the former lovers kept their dating low-key and eventually separated in 2012 after dating for more than a year. Andrew's ex-girlfriend is now happily married to actor Thomas Sadoski, with whom she tied the knot in 2017.

Andrew had also romanced former model Kelly Bensimon in the past, however, not much about the relationship has been disclosed.

Andrew's wiki reveals that he is a real estate executive working at the Turnbridge Equities.

He is the founder of the real estate firm which was established in 2014.  Andrew, age 35 as per his wiki, previously served as the Senior Vice President at Fisher Brothers. The American businessman graduated from the School of Business at George Washington University with a degree in B.B.A and has majored in Finance.

Andrew is actively involved in social works and has also co-founded the St. Jude Children's Hospital.