By LRU Writer | On: August 15, 2018
Clement Giraudet and his two-decades older girlfriend, Robin Wright got married in a wedding held on... The pair has been dating since... Prior to dating Clement, Robin was married to... Age, Birthday, job... 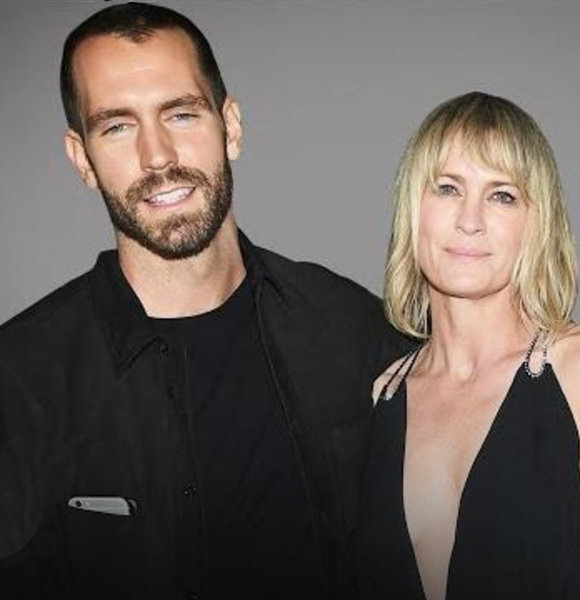 Age can be a determining factor in many things; however, when two people fall in love, age becomes nothing more than a number. This holds true to Clement Giraudet, who recently married his two decades older Golden Globe winner girlfriend.

Clement is now being perceived as the perfect husband material as he convinced the two-time divorced actress to marry him after dating for only a year. With limited attendees, Clement and his bride tied the knot in a low-profile wedding ceremony.

After ending the 14-year-long marriage with her Mystic River actor husband, Sean Penn in 2010; actress Robin Wright walked down the aisle with her two decades younger boyfriend, Clement Giraudet on 11 August  2018.

Only with a year of dating, the couple exchanged the wedding vows in southeastern France at a low-profiled intimate ceremony which was attended by the couple's closest friends and family members. Clement, who has not yet revealed his birthday, welcomed the limited attendees to join the pair on their special day.

Robin, who ages 52, stunned the private ceremony dressed in a 'bohemian lace wedding gown' possibly selected by stylist Kemal Harris for the event. Clement Giraudet and Robin Wright in September 2017, about a year before their wedding (Photo: dailymail.co.uk)

An Insider claimed to the PEOPLE magazine that Clement and his The Blade Runner 2049 actress bride wanted to celebrate their wedding day rather than publicise about it.

'It was very intimate and low-key. Robin wanted it to be about them, not a big production.'

A day after the wedding, Robin's 27-year-old daughter, Dylan Frances Penn shared a video of herself and the guests enjoying the wedding via her Instagram on 12 August 2018 captioning it, "Wedding Vibes."

Dylan missed informing that the 'wedding Vibe' was none other than of her mother and also she was spotted dancing at the ensuing reception held in a commune, La Roche-sur-le-Buis. Now, it has been known that she had shared the footage of her mother's wedding.

Clement Giraudet, who has a job as a fashion executive, was dating the House of Cards star since 2017. The couple had made their first public appearance in France during Paris Fashion Week in September 2017, when they attended a soccer match along with Robin's son, Hopper Penn.

Following the couple's public appearance, they were also spotted celebrating their holidays in Tahoe City, California in December 2017. Aside from Clement, Robin had some past intimate relationships with several celebrities.

Clement's Wife Past Relationships And Marriages

Robin's wedding to Clement isn't her first as she had walked down the aisle on two previous occasions. Her first marriage may not be well-known to the public as it didn't last long and was out of the focus of the media. The Pour Les Femmes co-founder was previously married to her NBC's Santa Barbara castmate, Dane Witherspoon in 1986. The short-lived relationship ended with divorce in 1988. Dane died at the age of 56 in 2014.

After her first marriage ended, Robin fell in love with her co-actor of the movie State of Grace, Sean Penn in 1990 and soon started living together. Also, the former couple became parents to a daughter named Dylan and a son named Hopper before they tied the knot.

In the presence of their children, Robin and Sean got married in 1996. However, the couple ended the commitment with a divorce in 2010. Robin Wright with her husband and children in 2004 (Photo: Wire Image)

After ending her romance with her children's father, Robin began dating her Rampart co-star Ben Foster in February 2012. With their two years of relationship, they got engaged in January 2014 but called off their engagement in November 2014. However, the couple soon reunited in January 2015 only to split up later. The on-and-off couple ended their second engagement on August 2015.

However, Clement has not disclosed any history of past affair or marriage.

Well, with her bitter past relationship, Robin seems to have found the perfect husband in the dashing Saint Laurent VIP relations job manager, whom she has chosen despite the two decades of the age gap.