By LRU Writer | On: March 03, 2021
Social media star Cole LaBrant gained fame after posting vines in Snapchat, and later YouTube. The star with more than 5 million subscribers on Youtube is happily married to his wife. The adorable couple tied the knots in a fairytale esque wedding ceremony in front of family and friends. The pair also shares a beautiful daughter making the family of three and now, the number seems to be rising. 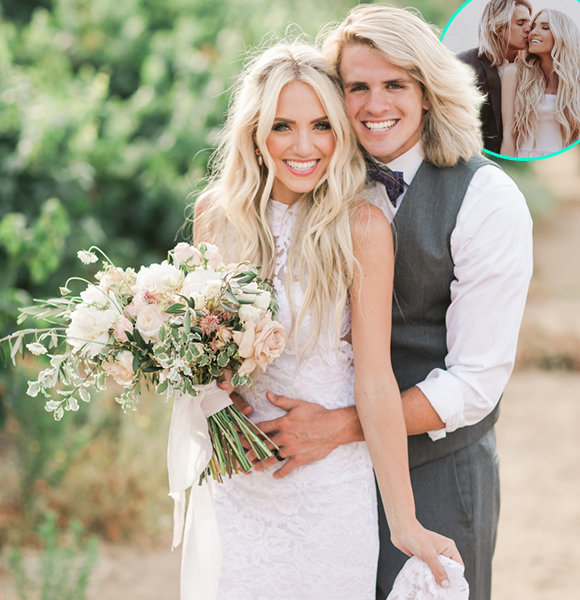 Besides fame, the star, with more than 5 million subscribers on YouTube, is happily married to his wife. The adorable couple tied the knots in a fairytale esque wedding ceremony in front of family and friends.

The pair also share a beautiful daughter making the family of three and now, the number seems to be rising.

Follow down the full story to uncover Cole's married life!

Wedding Vows For Both Wife And Daughter

It was the day of 10th July 2017. The church was decorated with white flowers.

Away from Hollywood's hassles, pretty girls were draped in matching cream color outfits lined up with bouquets lilies, roses, and hydrangeas. Everything was beautiful and surreal in Cole LaBrant and Savannah Soutas' wedding, held at Temecula, California. Cole LaBrant with wife Savannah Soutas and daughter Everleigh at their wedding in 2017 (Photo: inspiredbythis.com)

Cole had already let his fans know what was coming, three days prior to the wedding he had announced he would be turning into both, a husband and a daddy. He posted an Instagram image on 7 July 2017.

A devout Christian and a firm believer in the almighty, Cole got married to his longtime girlfriend/ fiance Savannah Soutas on 10 July 2017, six months after being engaged.

The fashion blogger bride adorned a spotless white floral gown, with her long blonde locks braided behind. Savannah's 4-year-old daughter looked every bit as pretty as her mother in a Tutu Du Monde floral dress.

The small yet intimate guest list drew audible gasps when viner Cole stepped out in the sunshine in a grey three-piece suit. With his free-flowing blonde locks matching his shoes, the handsome hunk was every bit a Prince Eric.

However, the best part of the day was still to come.

No eyes remained dry as the 22-year-old YouTuber showed maturity beyond his years when he vowed separately for Savannah and his little daughter Everleigh to forever stay by their side and love eternally.

The intimate wedding between the social media sensations was attended by the bride and grooms friends and family. The couple first met at Grove mall in LA during Cole's visit and started dating in June 2016.

Cole later proposed his then-girlfriend in 2017 at the Monarch Beach Resort in Orange County and later, posted a video of him proposing to his girlfriend on 22 January 2017. Cole not only got down on his knees but also made a custom ring for their daughter Everleigh and crouched on his knees as he popped up the question to both the ladies.

Previously in 2015, the viner had asked Selena Gomez to partner him for his prom night, in a cute Youtube video which featured lip-sync on Selena's song and a proposal.

The former member of popular YouTube channel, Dem White Boyz, Cole is enjoying his marital life to the fullest with his newlywed wife, Savannah.

The married spouses run their YouTube channel Cole&Sav together, which boasts more than 5.3 million subscribers and chronicle their everyday life in videos posted on Youtube. His insta posts have also successfully revealed Cole's emotions about how lucky he feels to have met with his wife, and wants to spend the whole life with her. Similarly, the couple's social media also announced that they were expecting their second child via a YouTube video on 9 May 2018. The video also captured Everleigh's unbridled joy when she came to know that she was going to be an elder sister.

A burgeoning career, loving wife with a daughter, expecting another, Cole has achieved near to everything at a tender age of 22.

The day to welcome the fourth member of their family came on 28 December 2018 and the delivery went better than expected. Savannah gave birth to a healthy baby daughter on the same day, who weighed six pounds and 13 ounces at birth.

Cole and his wife named the girl child Posie Rayne and the kid is a delight to eyes. Further, Posie has already become a celebrity on Instagram amassing over one million subscribers on the social media site. Cole and Savannah, who celebrated the second anniversary of their engagement on 20 January 2019, are happy to add a little sister to their daughter. And, Everleigh is also loving and cherishing her baby siblings. In fact, the siblings seem to have developed a deep bond as little Posie looks extremely comfortable in her older sister's company.

With Cole is enjoying a loving family with his three leading ladies, things could not get any better for him.