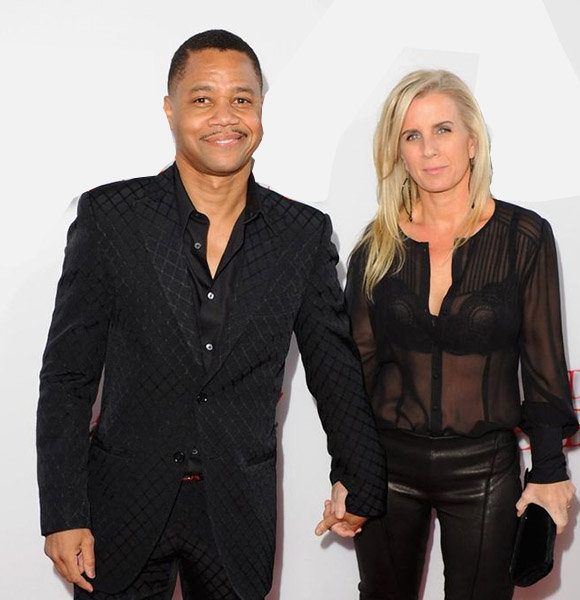 Most people know Cuba Gooding Jr. from his part in Jerry Maguire's movie alongside Tom Cruise. Cuba received an Academy Award for his role as Rod Tidwell in the film.

The talented actor has been active in the entertainment industry for more than three decades. But, his fame also has affected him in certain ways, and the actor is making headlines for both good and bad reasons.

Long married life is not for everyone. And Cuba is one of those who have gone through a divorce ending a reasonably long marriage.

But, before discussing Cuba's separation from his ex-wife, let's know-how and when his past love story began.

The actor met his former wife, Sara Kapfer, around 1987. Cuba and his wife, Sara, were high school sweethearts. They dated and lived together for seven years before finally deciding to marry on 13th March 1994. Cuba Gooding with his ex-wife Sara Kapfer in 2013 (Photo: People)

Cuba Gooding and his ex-wife have three children from their 20-year relationship. Their oldest son Spencer Gooding, an actor, was born on 11th September 1994. Mason Gooding, their middle son, came onto the earth on 14th November 1996, and their daughter, Piper Gooding, was born on 22nd October 2005.

Even after three kids and 20 years of being together, Cuba and Sara grew apart. As a result, Sara filed for a legal separation from the actor in August 2014.

Cuba's dating life had been quiet for a pretty long time after his divorce from Sara. But, he was finally spotted with a new woman in 2018.

The Radio actor's new girlfriend is none other than legendary actor Robert De Niro's son Raphael's ex-wife Claudine De Niro. Like Cuba, she has three children from her relationship with her former husband, Raphael. Contrary to Cuba, his ex-spouse Sara has kept her relationships post-divorce private. However, their problems have not affected their affection for their children.

But after their divorce, Cuba got involved in many problems.

After his divorce, the Jerry Maguire actor's life has certainly not been hunky-dory. Cuba has allegedly involved itself in various inappropriate activities.

The police arrested Cuba in June 2019 after he turned himself over to the authorities. He was taken under arrest for a sexual misdemeanor charge.

Allegedly, Cuba touched a woman without her consent in the Magic Hour Rooftop Bar & Lounge in Midtown Manhattan. As the case progressed, the number of accusers too increased.

As of 15th October 2019, as many as 14 women have accused Cuba of having a habit of groping women over the years. However, the actor denied all the accusations latched at him.

Meanwhile, this case did not have a significant impact on his career.

You May Be Interested In:- Rich Paul Wife, Dating, Family, Net Worth

The vastly experienced Oscar-winning actor owns several expensive properties around the country and is involved in frequent real estate purchases and sales. According to Celebrity Net Worth, he has a huge net worth of $12 million.

Forbes had reported the sale of his stunning Pacific Palisades Estate for a whopping near-$10 million in April 2014. Cuba also sold his Studio City house for $2,75 million in 2013, contributing more to his net worth.

As of now, he is busy with his other projects and living his life peacefully.

Stay tuned to get more updates on Cuba Gooding.