Darlene Mowry Wiki: Debunking Her Death Rumors! She is Married and Alive

By LRU Writer | On: May 17, 2019
Darlene Mowry Wiki: Debunking Her Death Rumors! She is Married and Alive. The Bahamian-American Darlene Mowry was born on 25th October 1956, in the United States. She is best known as the mother of the identical twins, Tia and Tamera Mowry, the stars of the ABC series Sister, Sister. The 62-years-old and her husband, Timothy Mowry, are also the parents of Tahj and Tavior Mowry. 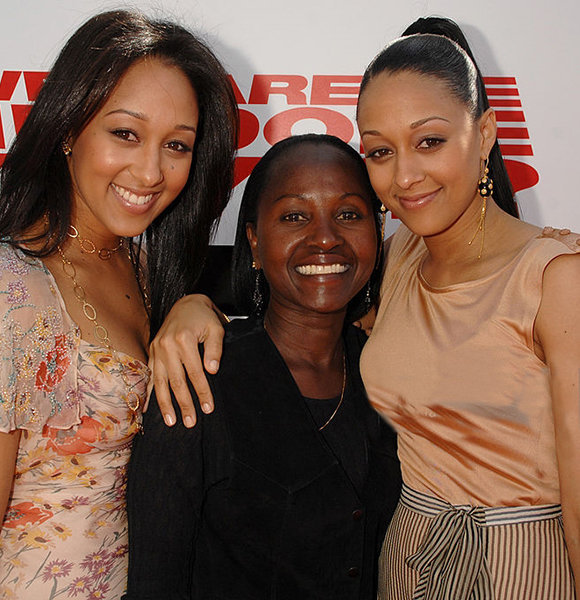 Every mother is the first inspiration for a kid; she is the one to introduce her children to the world and socialize them. When it comes to celebrity's mothers, Darlene Mowry is one of the most influential mother figures, known for her lifetime devotion to making her children's career.

Darlene, the famous mother of the renowned twin sisters: Tia and Tamera Mowry, is everything from the constant pillar of love and support to inspirations and life path guide.

She took the hard way of struggles and hardships to get her celebrity children to where they are now. She has her own story to tell. Read down below to find out Darlene's motherly journey!

The Bahamian-American Darlene Mowry was born on 25th October 1956 in the United States. She is best known as the mother of the identical twins: Tia and Tamera Mowry, the stars of the ABC series, Sister, Sister. The 62-year-old and her husband, Timothy Mowry, are also the parents of Tahj and Tavior Mowry. Her love story started way back in college after she first met her husband, Timothy, in high school in Miami. The college romance blossomed more after they both joined the army and became NCOs. The couple tied the knot once they both became part of the army world.

After marriage, the couple became parents to twins, Tia Mowry and Tamera Mowry on 6th July 1978, in Gelhausen, Germany. The twin sisters had only two minutes time difference between their births. Both Darlene, as a drill sergeant, and Tim, as a first sergeant, were stationed at the place when the twins were born. Tia recalls her childhood days at the military base as,

“The one thing that I do remember was just living on base. I thought that was the coolest thing. You can step outside of your home and see people who are serving your country. It just gave me great pride to be around such strength and courage.”

The identical twins expressed that their parents' touch of military upbringing made them appreciate the military men and women.

“I think a lot of the times people, especially nowadays, have gotten complacent with our safety. We don’t realize that there are men and women dying every day just so we can stay safe. Whenever I go to bed, I know that there are people who aren’t sleeping to keep me safe.”

Military discipline was the backbone of the Mowry family. The sisters explained that the army home upbringing has rooted in them, control, and respect for life. Tia, who is also the mother of her son, Cree, was much inspired by the parenting she received and hoped to pass the same norms and values to the next generation of Mowrys.

“With my son, there will be discipline. It’s important for your integrity and your character.”

Darlene moved her family to Fort Hood, Texas, when her girls were at the age of two. The family did not settle down there permanently, frequently running to different places like Honolulu, Hawaii to Killeen, Texas.

The Sister, Sister star girls were eager to make their name big right from the start. After appearing in a lot of talent shows, the twin sisters repeatedly annoyed their mother, Darlene, to get out of the military base to land more talent shows.

“We saw all the little actors and actresses on TV and we said, ‘Mom, that looks like fun. Let’s do that!’”

Darlene was smart enough to make a deal with her girls—if they could get a TV commercial within a month, she would move the family to California, quitting the Army.

“Tia and Tamera, I know you guys want to act, so that’s what we’re going to do. We’re going to go to California and stay there for a month. If you guys get a job, I’ll quit mine.”

The incident was followed by Darlene’s 30-day leave to head to Glendale, California with the twin girls in the summer of 1988. She stayed with her friends in California, and this was just all before the girl’s 13th birthday.

The girls won the bet, for, within a month, they landed themselves in the second Dutch ad for Chrysler. Darlene, of course, resigned from the military to settle down with her family in Los Angeles in 1989.

She first worked as a security guard there to support the family. Surprisingly, Tahj got more roles than his sisters and even landed himself in the role on Full House. It was in the set of Full House that Darlene’s daughters realized they were passionate about acting.

Tia explained the change in their interests from pageants to acting as,

The incident led to the discovery of the twin sisters for the ABC series Sister, Sister by DePasse Entertainment. Fame and fortune came in Darlene's family after her daughter's successful career.

The branches in Darlene's family tree increased when her daughter, Tia, had her wedding with the actor Cory Hardrict in 2008 and gave birth to the son, Cree on 28th June 2011. Tia was expecting another child as she posted the news on her Instagram in November 2017.

The former child star became blessed with a baby girl in May 2018. She kept her daughter’s married life a secret for the longest time before finally announcing the name in June of the same year via Instagram.

Well, the muchkin’s name is  Cairo Tiahna Hardrict. Tia revealed the meaning behind the little bundle of joy’s name.

The first name means victorious while the middle name means follower of Christ. Tia’s husband is a man of faith and believes in God deeply; thus, it is fitting he named his daughter Tiahna. It doesn’t hurt that the name also means one of the first Asian princesses.

The parents of two boast a beautiful love story like their daughter’s name.

The pair first met at a restaurant where  Cory was waiting tables and Tia, on the other hand, was loaded post her show Sister, Sister ‘s success. But the successful actress didn’t look down upon despite their economic difference. Cory revealed that her faith in him made the American Sniper love her even more. Thus, he decided that in spite of his dirt poor status; he would save money and buy the girl of her life a ring and get married.

As for Tamera, she married the news anchor, Adam Housley on 15th May 2011 in Napa Valley, California. Tamera Mowry at her wedding with her husband, Adam Housley (Photo: People.com)

The couple welcomed their first son, Aden John Tanner on 12th November 2012, and announced the pregnancy of second child on 4th January 2015. Tamera became the mother of two, giving birth to her second child, Ariah Talea Housley in July 2015.

Darlene, who is the mother of four children, is now the grandmother of four. Her life has been a beautiful journey on steep paths. Like many celebrities, Darlene has faced death rumors. However, her son's recent Instagram post wishing her birthday defuses all the death rumors.