By LRU Writer | On: March 03, 2021
DeAndre Jordan is an American basketball player playing for the Dallas Mavericks in the NBA. Born to play basketball, Jordan possesses a unique set of abilities in the court. However, off the court, his personal life has been a subject of interest as well. The basketball sensation is in a romantic relationship with his girlfriend... 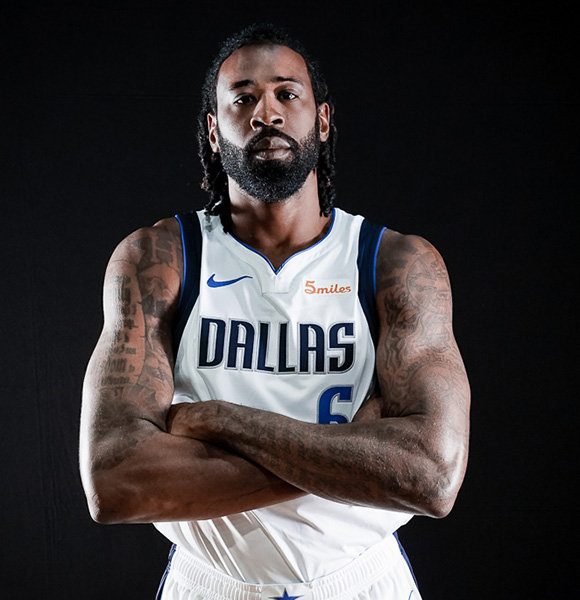 With an abnormally tall height, afro hair, and a body filled with tattoos, DeAndre Jordan carries a unique charm with him, which might appear weird for some.

However, there is nothing weird about the basketball star’s game, as he has gradually gone on to become one of the best center players in the NBA.

With a glorious career prospect alongside him, fame and fortune have been a good friend for Jordan. This has thus brought him enormous attention from his ladies fan following throughout the world. Romantically linked with a few of them throughout his career, it seems DeAndre has finally found the one to hold on.

Alongside his personal life, his professional career has never been far from headlines either. With numerous contract disputes and trade offer, Jordan has always been on a constant spotlight throughout his playing career.

Finally Found Perfect Girlfriend At Age 30; Soon To Be Wife?

With the fame, Jordan possesses as a huge NBA star, and the looks and personality to go along with, he has been associated with a long list of girls throughout his playing career. However, the rebound specialist has handled all the attention he received significantly well.

Among the long list of names that Jordan has been associated with, the name of Amber Alvarez stands head and shoulders above the others.

Jordan’s name with the internationally recognized fashion model has been associated since 2013, and the duo was believed to be in a relationship till September 2018, though no sort of confirmation was provided by both the parties during the period.

You May Also Like: Harrison Barnes Shares Wedding Moments With Wife | Recent Contracts

However, it seems DeAndre and Amber are a thing of the past now.

The former Los Angeles Clippers star is currently in a romantic relationship with his girlfriend Bethany Gerber. The duo is believed to be going out with each other since September 2018, immediately after Jordan ended things up with his former lover. Openly expressing their love and affection for each other through their social media posts, Jordan and his girlfriend Gerber appear to be endlessly in love with one another. So much so, that the basketball sensation is believed to have been engaged with Bethany.

Though no sort of confirmation has been given by DeAndre, it has been widely speculated that Gerber has been spotted with a ring in her hand on more than one occasion.

Similar: John Wall Girlfriend: Who Is He Dating At Age 28? | Family Status Unveiled

Despite their romance still in its early days, it seems Jordan has recognized Gerber as his future wife. Hence, it would be no surprise if the DeAndre, age 30, announces his 2010 Miss Kansas girlfriend as his wife in the coming days.

Massive Contract With The Mavericks

DeAndre Jordan, who stands up at the height of 6ft 11in with a body weight of 120 kg was born to play basketball. He began his journey playing college basketball for Texas A&M University. Jordan’s career quickly escalated as he was then picked in the 2008 NBA Draft by The Los Angeles Clippers.

In his ten year association with the Clippers, Jordan landed some staggering contract, the latest of which was signed in 2015, which saw him earn a salary of $21.9 million. A long stay at the top of the game has thus contributed significantly in Jordan’s massive net worth. Some huge salary figures and numerous brand endorsements, including his Cross shoe brands, has seen DeAndre bag a massive net worth of $32 million.