By LRU Writer | On: December 03, 2018
American television journalist, Deborah Roberts has been married to her husband for......Deborah and her journalist husband are parents to ... children......Her bio reveals that the Georgia native's father suffered from ... cancer, which caused him to......With a salary of ..., Deborah enjoys a hefty net worth of...... 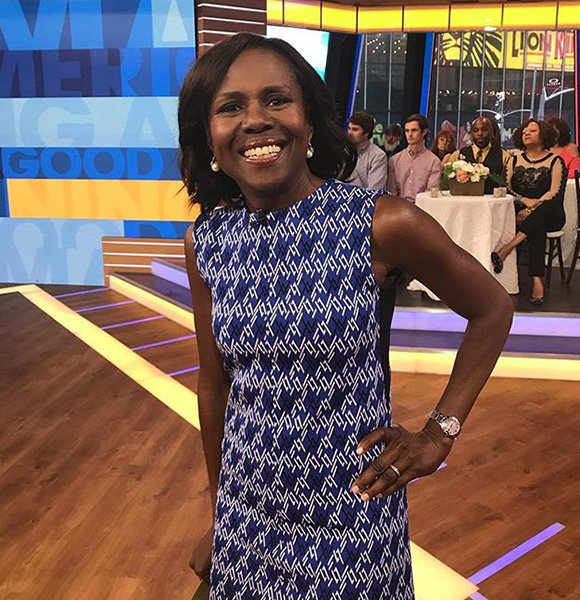 An Emmy award-winning American journalist, Deborah Roberts with her brilliant reporting skills and in-depth analytical abilities has gone on to become one of the most well-known journalists of recent times. With much of her success credited to her hard work and dedication, Roberts’ journalist husband and her family has contributed significantly as well.

Happily married to her husband, belonging to the same professional background as Deborah herself, the couple has set a new standard for love and marriage. So much so, that a book has even been published about the journalist couple’s incredible married life journey.

With a settled personal life significantly contributing to her career success, she has achieved tremendous career heights to bag herself a substantial net worth. However,  Roberts, who is loyal to her family and ancestors, has not forgotten her roots though.

Although Deborah and her husband Al Roker have worked on rival networks for most of their careers, the husband and wife duo never shared the ferocity of the rivals in their personal life. Deborah, a seasoned reporter for ABC News, has been happily married to her husband Al Roker, the weatherman on NBC’s Today Show, since 16 September 1995. The duo, who first met each other somewhere around 1990, during Deborah's brief stint at the NBC has always had good memories about each other since their early days' romance. Al, separating from his first wife Alice with whom he shares a daughter named Courtney, impressed the television journalist with his caring nature towards his family, as she said in an interview with People in 1999.

"Al was so sweet, he showed me pictures of his daughter and talked about his family. I just thought he was a nice guy, and that was that."

After tying the knot at the St. Thomas Episcopal Church in New York, the couple was blessed with their first child together in the form of their daughter, Leila Ruth in 1998.

The couple soon added more numbers into their family with the arrival of their son, Nick in 2002. With her daughter now off to college, and son growing up ever-so prominent, Deborah and her husband remain proud parents to their two children. You May Also Like: CNN Sunlen Serfaty Wiki: Parents & Ethnicity | All The Detail There Is

The partners, who recently celebrated their 23rd Wedding Anniversary in September 2018, have been by each other's side despite a lot of ups and downs in their marriage. This rollercoaster ride has thus seen the couple publish a book titled Been There, Done That: Family Wisdom for Modern Times in 2016, where they shared the highs and lows of their married life along with some intimate moments together.

Born and raised in Perry, Georgia, Deborah, age 58, has always been a family girl with utmost respect towards her father and mother. Following her father’s battle with colon cancer during the late phases of his life, Deborah and her sister Tina were thus extremely supportive of their old man in his cancer fight.

However, Deborah mentioned her regrets of not taking enough care of her father during her cancer days in an interview with ABC in 2006.

“You've got to care more. I thought I was caring, but not enough.”

Though her parents are long gone, Deborah constantly remembers her late folks through her Instagram posts.

Despite the tragedy of cancer present in her family, Roberts has never let her career take a hit. Beginning her career at WVTM in 1982, the journalist fulfilled her responsibilities in several networks before landing her dream job at the ABC News as a correspondent.

With numerous awards and accomplishments in her two-decade long association with ABC News, Deborah earns herself a much larger salary figure than the average $76k salary that other journalists make. With her salary figures believed to be around $300k per annum, Deborah has bagged a hefty net worth of $5million in her career span.