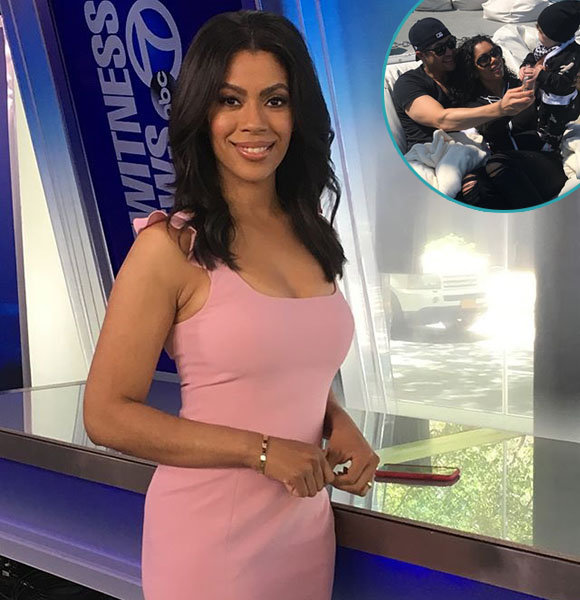 With the privilege to report a royal wedding, Shirleen Allicot brings an insight into the glorious opportunities prevailing in the world of journalism.

The co-anchor of Eyewitness News This Morning and Eyewitness News at Noon on WABC, Shirleen has enjoyed a blossoming journalistic career grabbing every opportunity that comes her way.

From reporting a beautiful wedding to being a part of one. Let's read how she does it all.

Not one to publicize her personal life, Shirleen has managed to flaunt her married life just enough. The reporter seems to be successfully leading her romantic life as per the looks of her social media.

Enjoying holidays with her husband Jesse together, the married couple celebrated their wedding anniversary on 25th June 2018. Safe to assume that her wedding vows remain intact as the couple seems to be sharing an endless love for each other.

See Also: Beautiful Actress Rima Fakih: Married to her Entrepreneur Husband in a Royal Wedding, Is She Pregnant Now?

Born in the Co-operative Republic of Guyana, with her parents residing in the United States, Shirleen was the reporter for the royal wedding between Prince Harry and Meghan Markle, who had the opportunity to witness and cover such a grand and beautiful event.

You May Also Like: Adrienne Bankert Bio: ABC News Reporter Married? Who's The Husband Then?

Almost 3 years in, she and her life partner's relationship continues to flourish. The secret might be in their tendency to taunt each other online.

For instance, when Jesse left for Vegas in December 2018, she Instagrammed a very risque image with the star of Aquaman, Jason Mamoa, as a means to get back at him for leaving her alone.

Shirleen, in an already appealing life, added one more spark of joy on 15 March 2017 when she and her husband Jesse welcomed a baby daughter Shayla together. The reporter shared her happiness on her Facebook account on 18 March 2017, confirming the good news.

“Talk about a girl who respects deadlines! Our little one waited out the storm Tuesday and arrived right on time, March 15th! Shayla Joëlle already made her television debut on Eyewitness News at Noon yesterday (go, girl!). She's her daddy's twin and loves to eat and sleep. 3 days into parenthood, Baby Shay continues to amaze us and we can't stop staring at the precious little person we created. If you have any advice for this new mommy, who hasn't slept in 3 days, please share!”

Allicot, a perfect wife in herself, now has one added responsibility in the form of a mother. However, not one to back down from challenges, she seems to be engaged in her newfound role. Going by her social media account, she could not be any happier. A reporter set in her ambitions to reach the top of her game, Allicot remains to be continuously supported by her husband, and now has one extra motivation to pursue her dreams, in the form of her baby girl Shayla.

Baby Two and Three With Husband

Her motivation to match her ambition undoubtedly saw a likely boost when she learned about becoming pregnant for the second time back in October of 2018.

However, Shirleen didn't reveal her pregnancy until three months later, in January of 2019. She announced the news of her expecting a second daughter with her husband, Jesse, on live TV while hosting The Feed.

A relatively exuberant Shirleen even received pink and blue flowers as well as congratulatory kisses from her male co-hosts upon the grand revelation. After having second daughter the couple recently welcomed their third child on August 2021. With her family of five having two daughter and a son, Shirleen is happily engaged with her family spending most of the time together enjoying the most cherished moments.