By LRU Writer | On: June 21, 2021
Former Tennessee Vols and Titans player DeRon is not married to a wife but...With his ex-girlfriend/a real estate agent, Page Turner, he... an HGTV show...other children or even his parents and their ethnicity are... 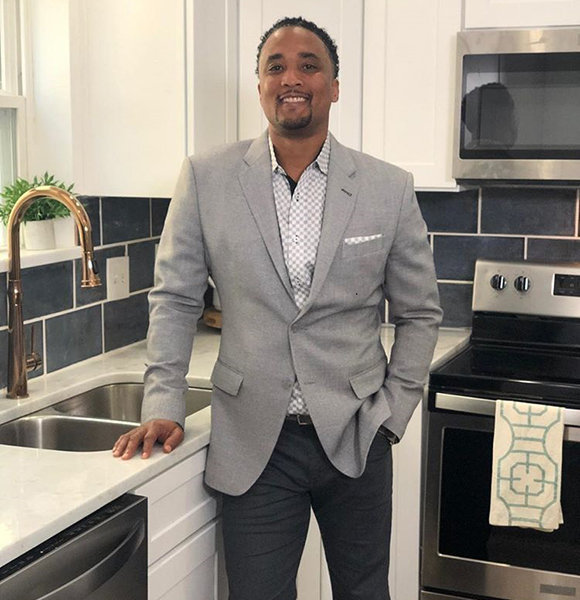 Former NFL cornerback DeRon Jenkins went from football to flipping houses soon after his passion for improving his first home. After he renovated his basement and added a bathroom and pool table’s room, his mind opened up to a new career.

Now a licensed contractor and Flip or Flop Nashville star alongside his ex-girlfriend, Page Turner, he earns handsomely from his renovation business and reality show.

Married To Wife Or Gay?

Apart from being business partners, DeRon and Page's dating life goes a long way back. Their relationship started when Page met him as a real estate client a decade ago, and they gradually fell for each other.

Even though their romance did not last long, their friendship did. Their amicable breakup took place in silence while both pursued their career. However, their reunion as a duo in Flip or Flop sparked some gossips about a possible romance once again.

Not to mention, the duo admits that their split has laid a better foundation for their working relationship - which has sprung out of respect, chemistry, and friendship. However, the former lovers have no intention of rekindling their romance for now.

Jerkins doesn't really share a glimpse of his love life on his social media. However, he does not back away from sharing moments with his daughter- Dylan. The father-daughter duo often spends time together and goes on fun dates.

On July 7th, 2019, the former athlete took to Instagram and shared a picture with his daughter of their date night together. The caption read-

According to the former athlete's social media, his daughter joined college at the beginning of 2018. Also, according to Dylan's Instagram bio, she works as a spin instructor at CycleBar Knoxville.

Born on 14 November 1973, Derik Jerkins is a native of St. Louis, Missouri. Raised by African-American parents, he is a former football cornerback in National Football League (NFL) and Arena Football League (AFL).

The athlete was a part of the football team at Ritenour High school in his hometown St. Louis and also played for the University of Tennessee before the Baltimore Raven drafted him in the second round of the 1996 NFL Draft.

As a professional footballer, he achieved 298 tackles, three interceptions, and one sack in the NFL. He retired in 2004 from NFL and became a licensed renovator. Soon, he started his own business, DY Constructions Inc. & DY Properties LLC.

With his ex-girlfriend and real estate agent Page Turner, he brought the HGTV show Flip or Flop to Nashville. The show - premiered in 2018. It shows the adventurous journey of renovating the worst properties into profitable gorgeous homes.

A passionate renovator and a real estate expert, his talents have helped HGTV achieve a top-five cable ranking at the TV shows' time slot.

His protracted football career, renovation business, and the TV show have immensely contributed to his net worth, estimated to be over millions. Transforming Nashville, one house at a time, DeRon is sure to take his net worth to new heights as well.