By LRU Writer | On: March 01, 2021
American journalist, Don Lemon has been "gay black man" all his life with no fear against anybody and has also been a source of inspiration for others to come out as gay. He has been awarded for his contribution in promoting equal rights for the LGBTQ community with Davidson/Valentini Award. The news anchor for CNN based in New York City, Don, has not only put his words forward for the LGBTQ society but also has been a beam of light for the black gay men. 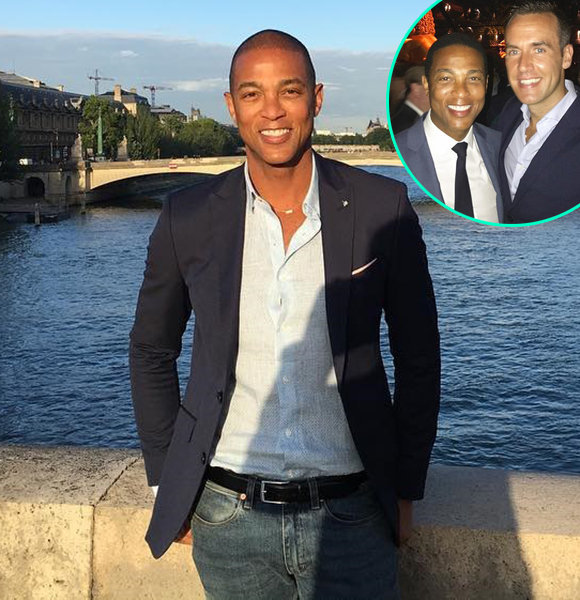 American journalist, Don Lemon has been "gay black man" all his life with no fear against anybody and has also been a source of inspiration for others to come out as gay.

He got awarded for his contribution in promoting equal rights for the LGBTQ community with Davidson/Valentini Award. The news anchor for CNN based in New York City, Don, has not only put his words forward for the LGBTQ society but, also has been a beam of light for the black gay men.

Well, he inspires people to share the love with no fear while he does the same with his boyfriend-turned-fiance. Openly gay Don has been in a loving relationship with his partner for some time now, and they sure seem something like a relationship goal.

Coming Out As Gay; 1st Time Showing Off Boyfriend

Don Lemon, the host of CNN Tonight, has been an ultimate role model for all the gay men around the world. He has been frank when to comes to sharing the love with his boyfriend, Tim Malone.

For 45 long years, Don remained silent about his sexuality, but finally, in 2011, he walked in with truth revealing that he is gay. He also mentioned coming out in his book, Transparent.

Even after his public revelation of his sexuality, there was no news of him dating. However, back in New Year's Eve of 2016, Don mentioned that he was single and stepped into 2017 with a resolution to being open to relationships.

The very next year's eve Don sealed the resolutions publicly with a kiss. He stepped in 2018 alongside anchor Brooke Baldwin in the Big Easy and while they were still live Don invited his lover in front of the camera and shared a sweet New Year's kiss.

Although Don presented himself as a single back then, some sources have reported that his romance with his lover was brewing.

Well, it seems like the pair have been sharing romantic moments since then and has been going strong with their relationship.

Almost two years of dating later, in April 2019, openly gay Don and his partner got engaged. And, the proposal couldn't be more gay-like.

Taking to Twitter on 6th April 2019, the CNN personality revealed that his boyfriend-plus-fiance Tom used their two poodles - Boomer and Barkley - to pop the big question. Sharing the photos of their dogs' tags, an elated Don wrote:-

"He gave me a present on his birthday. How could I say no?" Don Lemon with his partner, Tom Malone and their poodles vacationing in the Bahamas in March 2019 (Photo:- Don Lemon's Instagram)

Meanwhile, his husband-to-be Tom exclaimed sharing that the beloved journo had said yes to his proposal.

Engaged To Be Married:- Alex Rodriguez & Jennifer Lopez Got Engaged

To those unfamiliar, Tom is a New York-based real estate agent, who previously worked as a media sales executive.

How Don & His Partner Met?

Before 2018, the pair hadn't mentioned about the beginning of their relationship, but it seemed at the time that they started dating since at least the summer. Back then, Don had shared a shirtless shot of him alongside his boyfriend on sharing quality time on the water.

The post came in June 2017, and the pair had all smiles on their face. Don Lemon alongside his boyfriend, Tim Malone in the summer of 2018 (Photo: Don Lemon's Instagram)

The duo publicly appeared in the social media since then. Adding to it, they also made a public appearance back in October 2017. Don was spotted alongside his partner Tim leaving the star-studded Saturday Night Live afterparty at TAO nightclub in New York City.

You May Also Like: Fox News' Lisa Boothe Has What Parents Have? A Content Married Life & Set Wedding Vows?

As the public appearance grew, Don and his fiance Tom began to open up about their romance. Per their accounts, they didn't hit it off right away after meeting at a Hamptons restaurant. Despite meeting several years prior, the engaged duo waited until the former broke things off with his then-partner.

Explaining the whole debacle, the CNN personality - who owns a reported net worth of $10 million - in a 2018 interview said:-

“He was seeing someone and I was playing the field. They broke up and we got together, but we knew each other as friends for a year and a half.”

Earlier that year, he lost his sister L’Tanya “Leisa” Lemon Grimes due to accidental drowning. She was 58.