By LRU Writer | On: March 13, 2020
Elisabeth Moss hinted on her decision to maintain privacy in her personal and her experience with boyfriend...The same year, they started dating and got secretly engaged in...Elisabeth was married to actor and comedian... citing that he was a terrible husband and boyfriend to... 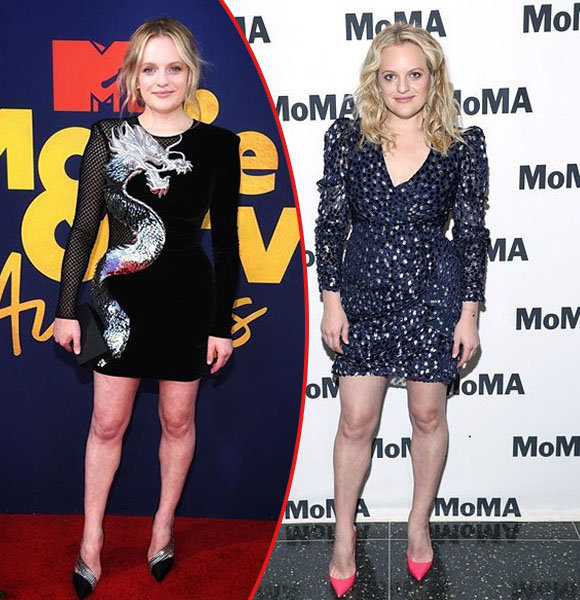 Actress Elisabeth Moss is best known for her iconic female roles in critically acclaimed TV shows such as The Handmaidens Tale (2017-2020) and Mad Men (2007-2015). In the latter one, she played the leading role of Peggy Olsen, a determined copywriter at an advertising firm.

Her role in Mad Men was a breakout performance, and it even led her to bag several nominations at Primetime Emmy Awards. She was consequently nominated from 2009 to 2015 in the category of Outstanding Lead Actress in a Drama Series.

Elisabeth is dating a guy named John, but she chooses to keep a low profile on her relationship. Back in May 2019, during a cover interview with Marie Claire, she hinted on her decision to maintain privacy in her personal and her experience with her boyfriend.

I learned you just don't talk about it. Who really gives a s**t whether or not I'm dating anyone? I hate to put that importance on it. I cringe a little. I go with a special someone who also likes the Raptors and the Leafs.

Also, in 2018, the Mad Men actress was caught in a PDA session with a mysterious guy outside the New York City bar.

Elisabeth was previously married to actor and comedian Fred Armisen. The two first met in 2008 during Elisabeth's cameo at SNL, where Fred was one of the cast members. The same year, they started dating and secretly got engaged in January 2009.

Eventually, in October that year, the two tied the knot. But the marriage lasted for only a few months as they divorced in 2010. As per The Handmaiden's Tale alum, Fred's inauthenticity during their time together led to their split. She opened up to New York Times in March 2014 about the split:

One of the greatest things I heard someone say about him is, ‘He’s so great at doing impersonations. But the greatest impersonation he does is that of a normal person. Looking back, I feel like I was really young, and at the time I didn’t think that I was that young. It was extremely traumatic and awful and horrible.

After Elisabeth's public reveal on their failed marriage, her ex agreed during an interview with Howard Stern in 2012, that he was a "terrible husband" and boyfriend to her.

According to the site Celebrity Net Worth, Elisabeth relishes a net worth of $20 million.

Facts About Elisabeth Moss Including Age: