By LRU Writer | On: August 12, 2019
Elle Evans married Matt Bellamy on...Donned a gorgeous wedding dress made by...Husband had popped the question in...Summons a net worth of...Biological parents had named her...Rose to fame by starring in... 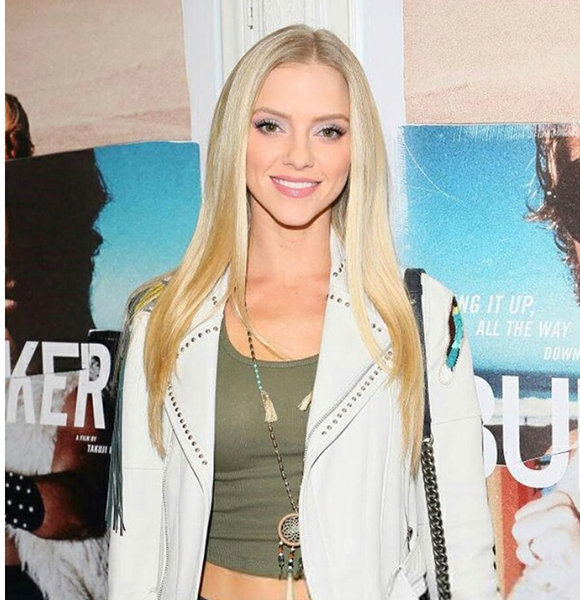 Elle Evans is off the market!

The American model tied the knot with Muse frontman Matt Bellamy on 10 August 2019.

Breaking the news via Instagram, the Paris, Texas-native shared the photo of the newlyweds from the big day. She captioned the image with a sweet message, writing "Mr. & Mrs. Bellamy." Meanwhile, her now-husband & British rocker Matt also shared a picture from the same batch of the wedding images on Instagram. The Neutron Star Collison hitmaker used the same caption as used by Elle.

The news of Elle and Matt getting married recieved warm reception from everyone. Musician Tom Morello, Playmate Anna Sophia Berglund Oconnell, and model Brittany Mason were first to congratulate the pair.

Judging by the photos from the ceremony, Elle and now-husband Matt got married in an oceanfront wedding. Reportedly, only the duo's closest friends and family attended the elegant affair.

On the big day, the former Playmate donned a self-designed, champagne-colored lace gown. Meanwhile, her groom looked dashing in a creamy three-piece suit and a bow tie.

Three days before the wedding, Elle professed excitement with the prospect of them getting married via an Instagram post. Her then-fiance Matt, on the other hand, had posted an image of him recieving a haircut.

Elle met husband Matt Bellamy in February 2015 while filming for the Muse's music video for the song, Mercy. After dating for some period, the duo got engaged while on a trip to Fiji in December 2017.

The engagement marked the British rocker's third attempt at finding the right spouse. Before Elle, he had tried to settle down with Gaia Polloni and actress Kate Hudson. With the latter, he has a son named Bing.

Despite the splits, Matt maintains a courteous relation with his former fiancees. Kate - who welcomed a daughter in October 2018 with Danny Fujikawa - even congratulated him and Elle on getting married on Instagram.

Awarded the Miss Louisiana Teen USA crown and the runner-up spot at the Miss Teen USA in 2008, Elle was later stripped of her titles following her arrest. She fought charges of dine-and-dash and marijuana possession.

Her modeling jumped started as she got featured on Playboy Playmate of the Month in October 2009. However, it was her appearance on Robin Thicke's controversial music video for single Blurred Lines that brought her national fame.

As a model and the face of NYX Cosmetics, Elle garners a respectable net worth. Her husband Matt, on the other hand, owns $30 million in net wealth.