By LRU Writer | On: August 26, 2019
Emily Wears net worth in exact figures is...pair announced they would get married and revealed...boyfriend proposed her by gifting her Red Merle... 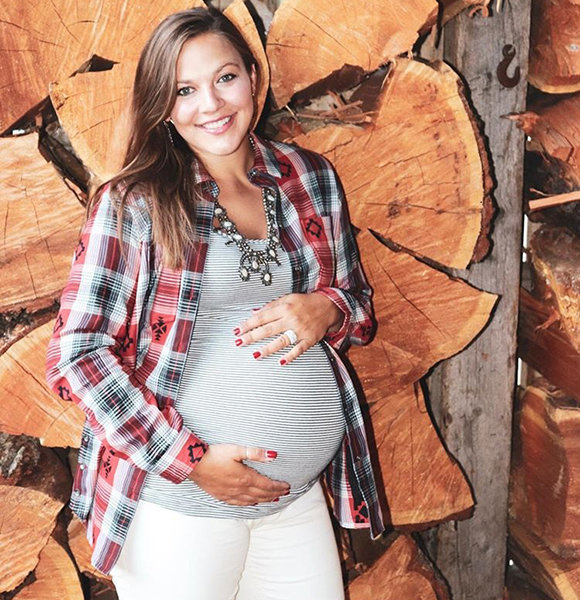 Emily Wears is no stranger to the viewers of A&E Network’s hit show Storage Wars. Ever since her inclusion in season 10 of the reality show, she captured the heart of many viewers with her gorgeous smile and untamable auctioneering skills.

Interestingly, many might be unaware that she had tried to make her mark onscreen even before she appeared on the reality show. Since the reality star also aspires to become a successful singer, she had auditioned on reality singing show American Idol in 2015.

She was able to compete for her way till the celebrity round.  Moreover, she appeared in Animal Planet’s reality series Money Barn.

Her family background played a vital part to make her pursue a career in auctioneering. Her father, Brent Wears is the owner of the company Wears Auctinerring Inc, where she was involved most of her childhood.

She also has a little brother named Colton Wears, who is a professional archer.

Who Is Emily Wears Husband?

Emily is married to her long-time boyfriend Cody Kroul, a professional rodeo cowboy based in Idaho. She started dating him publicly from 2015 and finally a year later on 13th July, she received the sweetest proposal.

Her boyfriend proposed her by gifting her Red Merle mini Australian Shepherd, and there's more to that. On the collar of the dog he gifted, he had tucked "yes or no" labeled locket to which her answer was the initial one.

Eventually, the pair announced they would get married and revealed the wedding date as 6th May 2016. Likewise, their wedding took place on Salon, Montreal, among their family, and well-wishers.

Their wedding reception had a western designed vibe to it as the bride wore a designer western boots. Interestingly, the wedding dress she donned belonged to her mother, who had worn it in her wedding.

Also, her engagement ring dated back to 1920.

After the bride and groom walked away from the aisle, they joined the guests at the reception on Regal Crown in Lisbon, Iowa. The special day was made more delightful with a dance by the couple holding and kissing each other in their arms. Three years after the wedding, the happiness of the married duo doubled as they expected a baby to arrive in the world on 11 August 2019.

Little did Emily and her husband Cody know that they had to wait three extra days to become first time parents.

On 14th August 2019, the married duo welcomed their first bundle of joy — a baby girl named Millie Rose Kroul. Born precisely at 4:31 am, baby Millie weighed eight pounds and three ounces at the time of her birth. Meanwhile, she stretched 19.5 inches long.

Breaking the news via Instagram on the very day, the Storage Wars star shared a photo of her firstborn. By her admission, she and Cody were in a shock with a prospect of raising a daughter while asserting that the pair couldn't be more happier. Four days after giving birth to Millie, Emily got discharged from the hospital. She took it to Instagram to celebrate the milestone.

Emily’s net worth in exact figures is not disclosed yet, but she has financially secured herself through her career. She undoubtedly made a considerable amount from her work at Storage Wars.

Cast Of Storage Wars:- How Much Is Jarrod Schulz Age 41 Net Worth? Loving Family & Wife | Bio

Moreover, besides her salary from her work as an auctioneer, she sells various leather boots from her self titled website.