Gianluca Vacchi Age 51 New Girlfriend After Split With Wife, Who Is She?

By LRU Writer | On: December 18, 2018
Everyone who recognizes Gianluca Vacchi must have known him for his lavish lifestyle and endless posts on Instagram flaunting his tattoos and well-built tanned body...Previously a married man, Gianluca let go of his wife last year, but it looks like there's no shortage for ladies in the multi millionaire's life as he immediately moved on to a new girlfriend and has been dating her ever since... 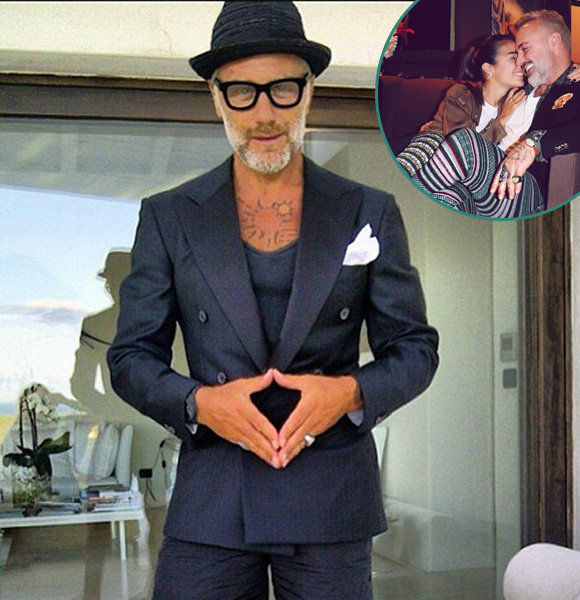 Everyone, who recognizes Gianluca Vacchi, must have known him for his lavish lifestyle and endless posts on Instagram flaunting his tattoos and well-built tanned body.

Often dubbed as "The Coolest Man On Instagram," the Italian entrepreneur's life has been an open book for his followers to learn.

Previously a married man, Gianluca let go of his wife last year, but it looks like there's no shortage for ladies in the multi millionaire's life as he immediately moved on to a new girlfriend and had been dating her ever since.

Today, let's dig in at Gianluca's relationships and find out who is his new girlfriend!

Gianluca was previously married to an Instagram star named Giorgia Gabriele. Although the couple has not disclosed the date and venue of their wedding, it's reported that the husband-wife duo first met back in 2010 but started dating three years later.

The Italian entrepreneur Giorgia eventually got married. The couple would often feature on each other's Instagram posts, and their dance videos were the most popular among fans. Gianluca Vacchi and Giorgia Gabriele back while they were still married (Photo: HelloMagazine.com)

However, the relationship didn't last long as the partners separated after remaining married for three years. Neither Gianluca nor Giorgia have disclosed the terms of their divorce settlement to this day.

After the divorce, the cool guy was left without a wife and no kids as he was childless, but soon bounced back and started dating again.

Just like his ex-wife found a new boyfriend named Andrea Grilli, Gianluca too moved on in his life with a new romantic partner. He commenced romance with former Miss Colombia Ariadna Gutierrez, but the pair's relationship was short-lived.

Gianluca, who has been aware and away from gold-diggers his whole life, later found love in his new girlfriend, Sharon Fonseca. The pair was first spotted dating back in April 2017, and they have come a long way in their relationship.

The couple regularly appears on each other's Instagram posts, and Sharon, a model, and journalist by profession have even termed the Italian business magnate as her best friend.

You May Also Like:- Pete Davidson Dating Months After Painful Ariana Split, Who Is New Girlfriend

For the occasion of Gianluca's 51st birthday on 5 August 2018, his girlfriend shared a photo of the lovely pair along with a beautiful message for her prospective husband.

"Every day I am captivated more by your giant and brave heart. I want you to continue undertaking your dreams with the love and passion that you have for all that you love, teaching us that life is a matter of moments and of not being afraid to be ourselves. Fortunate are we who have the opportunity to mark your mark in our hearts. Happy birthday@gianlucavacchi." The couple is deeply in love and enjoying their time together. However, they have not yet revealed any plans for getting married or starting a family together.

Born in Bologna, Italy, Gianluca was raised in a wealthy family. Several years after completing his education with graduation in economics from the Alma Mater Studiorum, he joined the Italian firm, IMA, as a board member.

The entrepreneur, now aged 51, started making new investments and even bought and sold several companies during the process.

Earlier in the 2000s, Gianluca got involved in a controversy after he sold off  Last Minute Tours to billionaire Calisto Tanzi and the company went bankrupt with a budget deficit of $20 billion. Gianluca was sentenced to three and a half years of prison time but didn't have to serve the sentencing.

The President of SEA Societa Europea Autocaravan, Gianluca was also reported to have his assets seized off by the bank following a debt of £9.5million, but it seems like he has now managed his finances and is well in his business. Currently, he possesses a net worth of $450 million.

Apart from his massive net worth, Gianluca, who stands at the height of 5'8" (172.5cm), is also a tattoo enthusiast and has carved several tattoos in his body.

His most recent one is a tattoo of himself in his back, which he flaunted through an Instagram post while appearing in his undergarment.