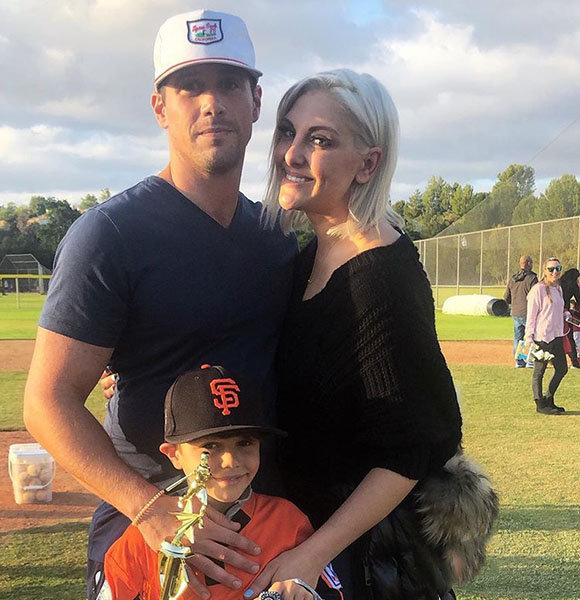 Gina Kirschenheiter is among those people who managed to ride the wave of reality TV shows further and higher in minimal time. She only started her career in 2018 via The Real Housewives of Orange County, but she has already won millions of heart.

Gina is a New Yorker. She was born on 11 May 1984 into the family of father Gene, and mother, Susan. She spent her childhood with her sibling, a brother, Chris in Long Island, New York, USA.

The TV star is a beautiful woman. She is a natural blonde with a fantastic height. And, even after being the mother of three, Gina, age 35, has managed to keep her figure in check.

However, she is not just beautiful. Gina has the brains to match her beauty; she has a degree in Psychology. She graduated from the Hofstra University in Long Island, New York.

Details On Husband and Kids

Being on The Real Housewives of Orange County, Gina’s relationship status was never a secret. Gina married her longtime boyfriend, Matthew Kirschenheiter, on 15th of May 2010.

The pair met back when both of them were students at Hofstra University in 2005. They dated for a brief period of 5 years before the decision to tie the knot.

Soon after their union, the couple was blessed with their first baby, a son, Nicholas Kirschenheiter in the 23rd of June 2012. After almost a decade in marriage, the couple went through some hardships back at the end of 2018. Things went far enough that they lived separately for some time. Their separation was supposed to be finalized with a divorce in November of 2018. However, neither Gina nor Matthew shed light on the matter.

However, the couple turned over a new leaf. On 13th of June 2019, Gina poured her heart out on an Instagram post wishing Matthew on his birthday. She mentioned that there was no one else that she would prefer to live her life with.

While fans had high hopes that the couple would move past the hardship into the better part of their relationship, things took a turn for the worse for Gina and Matthew.

After almost a decade of being together and parenting three kids, the duo's relationship came to an end. In August 2019, a judge gave the verdict for the dissolution of marriage. However, the couple would be legally married until the end of the year (31st of December 2019).

Furthermore, Gina has had her restraining order against her husband extended until their next court date in January. The reality TV star got the protective order in June of 2019 after she filed a case of domestic abuse against Mathew.

Mathew was arrested on charges relating to domestic violence and released the next day on bail for $0. While he has not been for any offense yet and a court date is, however, to be set, Mathew has been “let go from his long-time employment at PIMCO, an investment management firm.

For Mathew’s defense, his attorney, Bonnie Rosen has gone on record to accuse Gina as alcohol abuse. The claim came after Gina got arrested for DUI in January 2019. Gina pleaded guilty and got sever of 20 hours of community service and 6months in an offender alcohol program.

End Of Chapter With Husband

The long ongoing dispute between Gina and Matthew has reached its climax as the court has given a verdict on the matter of their divorce.

Regarding the dissolution of marriage plead, one of the judges decided to grant permission for their seperation. On 7 September 2019, the year-long debate was finally rested, but the two will remain legally married until the end of December.

Both sides went through a lot last year, especially Matthew, who was arrested with a false charge of domestic violence. His lawyer reached out for justice as he was imprisoned with any conclusive evidence.

The responsible father never involved himself in any violence and always took his three children as the priority. Claiming the same, his attorney defended him and cleared him off the charges.

So, the ex-couple started living separately but continued to share the responsibilities towards the children. Moreover, her ex-partner was required to pay nearly $10,000 for child support as part of the custody agreement signed in August 2019.

Finally, the judge gave his verdict by finalizing their divorce although they would remain a husband and wife legally until the end of 2019. But, Gina was destined to search for her suitable match despite going through a failed marriage full of turmoil.

So, on 1st October 2019, the reality icon introduced fans to her newfound lover via her Insta handle. With a picture featuring herself smiling beside her boyfriend who goes by the name of Travis Mullen, she wrote,

“Always find a reason to laugh. It may not add years to your life but will surely add life to your years.” The pair were spotted spending good times on a coffee date. By the look on Gina's face, she seemed more than content with her lover. Although it's unknown when the two started dating one another, she revealed that the two were introduced to one another by a mutual friend.

Interestingly, her new partner Travis is a divorced man as well, along with few kids from his previous relationship. So, with so much in common, it's probable they'll step up their relation soon.

Considering that it hasn't even been a year that she made an appearance on screen, the new star has done immensely well for herself.

Gina officially started her career in the entertainment industry on the 11th of June 2018 on the Bravo network's reality TV series 'The Real Housewives of Orange County.' She appeared in all the 22 episodes of the 13th season of the show.

With the exposures from the shows, Gina grew to be a star. Her Instagram, in a short period, has grown into a family of more than a quarter of a million followers (277K to be exact).

The showbiz not only changed the numbers on her social media but, also made an impact on her finances. Although her salary on the show was never disclosed, considering the standards of the show, she must’ve been paid a pretty dime. As of now, her net worth is an astonishing $1 million.