By LRU Writer | On: March 01, 2021
American TV actor Glenn Hetrick is a judge on the show Face Off, who is also known as a special make-up artist/designer. However, his makeup designs are not the only thing that is perfect, his married life is too. Glenn is blissfully married and shares romance with his wife, dodging off gay rumors that come towards him. 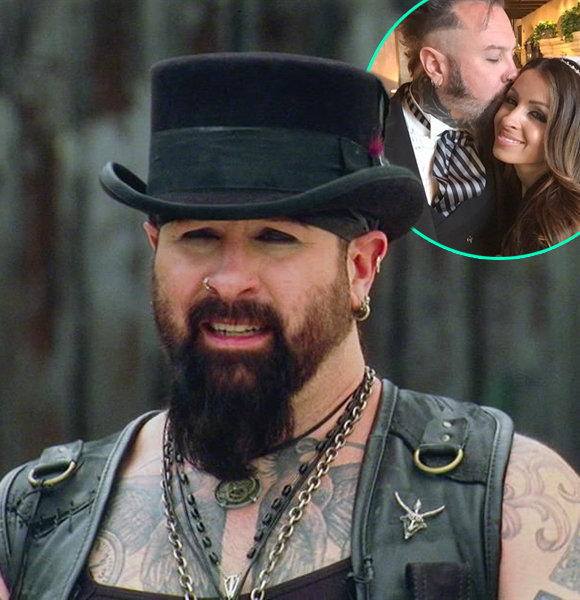 American TV actor Glenn Hetrick is a judge on the show Face Off, who is also known as a special make-up artist/designer. However, his makeup designs are not the only thing that is perfect, his married life is too.

Glenn is blissfully married and shares romance with his wife, dodging off gay rumors that come towards him.

Well, read along as we deliver the whole story along with his wiki-like-bio!

Perfect Proposal To Being Married

Glenn Hetrick is a married man to Michele Monaco, who is also a makeup artist.

While, both the married couple shares similar interests, it is their very own profession that brought them together in the first place. The couple dated for a while and after sharing some memorable moments together, Glenn got down on one knee and popped the question to his then-girlfriend Michele.

Glenn proposed to Michele at the house where they have a Koi pond with a bridge over it. Glenn made the romantic proposal on the very bridge, to which Michele said yes.

The couple got married in The Mission Inn Hotel & Spa, located in Riverside California on 13 May 2017. The couple planned for a honeymoon in Italy, but due to their busy work schedule, the couple has still not been able to make it to Italy.

The married spouse has been cherishing their every moment together. Even though they are mostly working, they spent leisure time together, that's left out of the busy schedule. According to Glenn's interview with inquisitr.com in July 2017, they spend a lot of time together. He stated,

"There really isn’t much in between the work, to be honest. When there’s a little time, Michele and I spend a lot of time with our cats and watching horror and science fiction. When we’re not doing it, we’re watching it. That’s pretty much it. If we find any time other than that, we try to get out for a hike and we hit the gym a lot. We have a gym at the shop and we have one up the street, so trying to squeeze the workouts into making the work."

Michele's Instagram is also filled with their marriage photographs that she frequently posts on her social media wall. Since their marriage, Michele has been posting pictures of her wedding with Glenn while making the gesture of celebrating their monthaversary.

The couple recently celebrated one year anniversary of their marriage. Michele marked their one year of marital bond with a post on Instagram where she posted a picture of her reading her vows in the ceremony. She expressed how happy she is with the marriage through her caption. She wrote,

"1 year ago today was the happiest day of my life, I married my best friend, my partner and my soul mate, Glenn Hetrick.
Love you more and more everyday husband. Happy anniversary my love. Love your Udi." Through her posts, Michele revealed how glad and blessed she is to marry her husband, who is also her best friend. She regards her marriage with her partner as a magical moment which she will forever cherish.

However, the couple is yet to talk about having kids. There not been any news of Michele's pregnancy in the media, which suggests they might be waiting for a perfect timing to finally become a parent.

Recently, on August 2018, Glenn reminiscent of the memories from the past as he posted a throwback picture of him with his wife on his Twitter account. He made sure to share the picture from three years back when the pair had attended the comic con together.

Well, even after years of being together the pair still seems to be sharing quality moments together as they recently watched the Planet of The Apes together.

Nominated In Emmy For Prosthetic Makeup

With his blissful married life, Glenn Hetrick has also been acing in his career. With his hard work and determination, Glenn has been able to make a name for himself in the world of entertainment.

Turns out he has been nominated in the Emmy for his work in the Klingons of season 2 of Star Trek. In the Star Trek: Discovery, which has earned two Emmy nominations, the makeup designer Glenn has earned nominations for Outstanding Prosthetic Makeup for Series, Mini-Series, Movie or Special.

Well, the nominations are the mark for Glenn's good work and the makeup artist acknowledges the people responsible for his achievement by thanking them for the nominations via his Twitter.