Gregory Smith is Engaged to Get Married! Meet His Wife-to-be

By LRU Writer | On: January 07, 2019
Gregory Smith is Engaged to Get Married! Meet His Wife-to-be. The Canadian actor asked the big question to his longtime girlfriend, Taylor McKay and announced their engagement on Instagram. The longtime couple, Smith and McKay, has been dating since 2011. After six years long relationship, Smith finally proposed to his girlfriend back in July 2017. 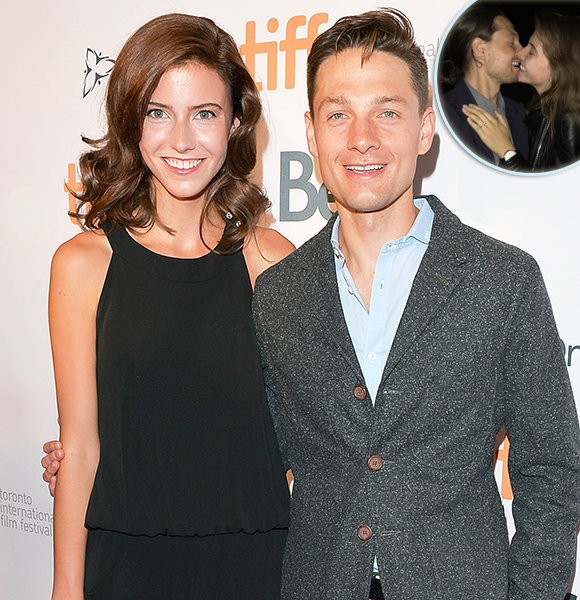 When you make a decision that you want to spend the rest of your life with a person, the first step to take is to get engaged to your lover, as that marks as the initiation of their life-long journey together.

Standing on the brink of such an anticipated beginning is the Canadian actor Gregory Smith, who was engaged to his girlfriend is now married to the love of his life. So let's take a look at their engagement and married story, and on the way, find out more about Gregory's wife!

The Canadian actor Gregory Smith popped the question to his longtime girlfriend, Taylor McKay back on July 2017 and announced their engagement through Instagram.

Smith finally proposed to his girlfriend back in July 2017, after a six-year relationship that initiated back in 2011.

The 35-year-old actor announced the happy news of their engagement on Instagram on 31 July 2017. The adorable photo of the couple showcased Smith kissing his fiancé with her new diamond ring resting on Smith's chest. Besides that, McKay reposted the same image along with a series of pictures on Instagram with her husband and her new diamond ring.

Moreover, just after some days of their engagement, McKay shared a photograph on Instagram, where she can be seen flaunting her engagement ring. Ever since the engagement, the lovebirds have been inseparable, and they often offer their followers a peek at the cute couple things they do together.

On the Christmas of 2017, McKay shared an image of the duo celebrating Christmas with their dog in Park City, Utah, where they can be spotted getting blissfully content with their fur baby.

Don't Miss:- See How Michael Ray Got Engaged With Girlfriend Carly, Its Romantic

Hollywood power couple, Gregory Smith and Taylor McKay tied the knot on 18 August 2018 at Lookout Cabin in Park City, Utah--after a year of their engagement.

For the wedding day, Gregory chose a navy blue suit and his bride stunned the aisle in a simple but elegant lace wedding dress with a long train and a slit at the front.

After the intimate wedding ceremony, the newly married couple shared the glimpse from their wedding day on the Instagram.

Everwood star shared an adorable wedding picture on Instagram on 21 August 2018 of him and his bride mountainside with the caption, While Gregory shared limited pictures from their wedding, his wife couldn't resist flaunting the beautiful memory from that day.

Dive In:- Emilie Ullerup Is Married, Explicit Bio Reveals All There Is - Age, Height, More

Before experiencing the moments of the wedding day, the couple went through the pre-ceremony "rehearsal." She wrote that her "heart is bursting" in the series of pictures she shared.

Since the couple finally exchanged their "I do" in August 2018, the lovebird chose the Ventana Big Sur--a four-star hotel, and Bora Bora island of French Polynesia to rejuvenate their romantic life. On 5 September 2018, Taylor Instagrammed the glimpse of the honeymoon where the couple was blissfully soaking in the pool.

The Canadian actor Gregory Smith was born to parents Maurice Smith and Terrea Smith on July 6, 1983, in Toronto, Ontario, Canada.

Smith began acting at a very young age and got his major break with a role in the film Andre. Besides Andre, his other film credits include Sprnva, Follow, Dream House, and Boot Camp.

Discover:- 'VICE' Isobel Yeung & The Guy She Might Get Married To; Oh! She's Not Gay

Besides movies, Smith has also been a part of many hit TV series, like Street Justice, The Hat Squad, Mega Man, Guns, and Rookie Blue. But he is best recognized for his performance as Ephram Brown in the television series Everwood and as Dov Epstein in Rookie Blue.

Smith's career has awarded him a couple of awards as well; he won the Young Artist Award twice back in 1998 and 2003 for his performance in Shadow Zone: My Teacher Ate My Homework and Everwood respectively.