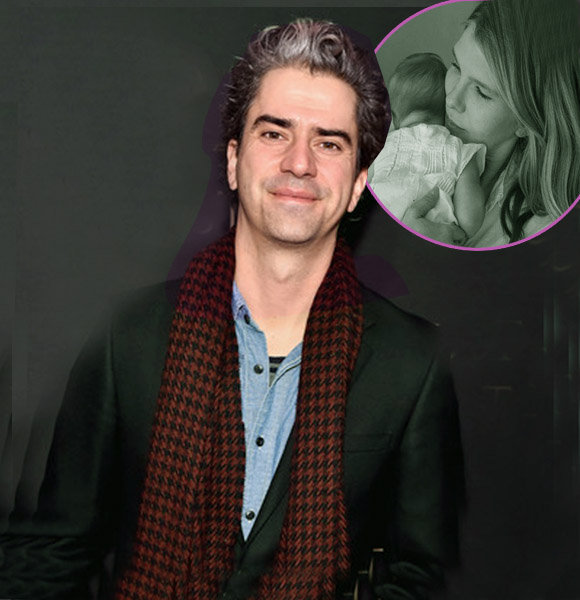 American actor Hamish Linklater is an extremely talented actor who has been lucky in both the entertainment industry and his romantic life.

Hamish, who made his film debut in 2000 with the film Groove, is famously known for his portrayal of a news correspondent in the HBO movie, Live from Baghdad.

Apart from being a well-established actor, the American Dreams actor's fandom is very curious about his romantic life. "Is the actor married to his wife and has children, or is he dating someone?" Let's have a look.

Does Hamish Linklater Have a Wife?

Hamish tied the knot with playwright and then-wife Jessica Goldberg in 2002. The couple first met when Hamish auditioned for a role in his spouse's play. After five years of marriage, they had their daughter- Lucinda Rose Linklater, in 2007.

But their marriage had many ups and downs and did not last long, causing the husband and wife to separate in 2012, ending a decade-long relationship. However, even after the demise of the long marriage, he didn't give up on love and found a partner soon enough.

Hamish started dating Never Again actress Lily Rabe in 2014. The pair's relationship progressed as they co-starred in various plays together, including A Midsummer Night's Dream.

The actor and his girlfriend's relationship hit a milestone when Lilly became pregnant with their first baby. The news of their pregnancy was confirmed at an event held in the Kennedy Center, as Lily showed off her baby bump on the red carpet alongside Hamish. They welcomed their baby daughter together in 2017.

Adding up to the happiness, the power couple welcomed their second baby daughter in July 2020, and in September of 2021, the couple announced their third pregnancy together.

As of now, the couple is going pretty strong, and we can hope Hamish will wife up his girlfriend soon. Further, Hamish and Lily also don't shy away from showcasing their love on social media. Captioning "Miss you @lilyrabe," Hamish posted an adorable polaroid picture with his girlfriend on May 4, 2021.

Talking about his loving family with is then-wife and now girlfriend and kids, Linklater has been blessed with happiness. Now let's take a look at his life before his marriage to his wife and his relationships.

Born on July 7, 1976, Hamish Linklater had his first acting experience in his mother's theater company at the young age of eight. Although born to parents James Lincoln Cormeny and Kristin Linklater, Hamish was raised by his single mother.

His strong mama was a Professor of Theater and an acting teacher at Columbia University. Because of his mother, Hamish had acting exposure at a very young age. He grew up around theater and fell in love with acting.

For You:- Barry Keoghan Girlfriend, Parents, Ethnicity, Net Worth

Further, his mother taught him a lot about acting that he incorporates to date. And, from his versatile on-screen performances, no one can doubt that his mother has taught him right.

As of now, the 6 feet 4 inches (1.93 m) tall actor has come a long way from his theater days. He has starred in numerous movies and TV shows, with almost fifty acting credits on his name. On top of that, his performances always garner ecstatic reviews from critics and audiences alike.

You May Be Interested:- Mike Fleiss Wife, Divorce, Children, Net Worth

Further, he was also nominated for a Screen Actors Guild Award for his role in The Big Short.

Apart from his acting endeavors, Hamish is also active as a playwright. During his career as an actor and a playwright, the Legion actor has amassed a whopping net worth of $4 million as per CelebrityNetWorth.

As the couple is growing their family, we cannot wait to update our readers on their future projects and endeavors.