By LRU Writer | On: September 29, 2019
Hart Danton is dating a gorgeous model...As for the gay rumors that surround... He was born to parents...He is complete...boasts an astounding height of...has accumulated a significant... 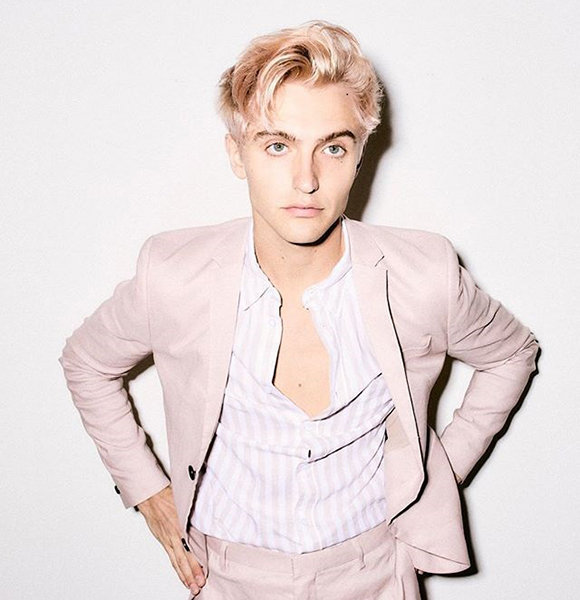 Before his fame from TV shows, the actor was already a social media sensation. He is a YouTuber, Instagram star, and a model signed to NEXT Model Management.

Hart Danton sure is an attractive guy with those chiseled cheekbones and bold brows. Hence, the massive number of his admirers does not come as a surprise.

However, to his fans' disappointment, the young actor is not single. Although Hart has not shared much info about his relationship, in a 2018 interview, he mentioned his girlfriend- Sunny Soofiani.

Further, Hart and his girlfriend Sunny were often seen hanging out with other cast members of Riverdale off the set, in 2018.

However, there is no info on their relationship as of 2019. Perhaps, Hart is trying to keep his dating life out of the public eye and focus on his career. Hart and his girlfriend Sunny in 2017 (Photo: Hart Denton's Instagram)

As for the gay rumors that surround Hart, they are probably because of the pansexual character he portrays in Riverdale.

In the show, although no confirmation has been given about his character-Chic Cooper’s sexual orientation, there are hints of his character being gay.

However, off-camera Hart’s relationship with Sunny throws all such gay rumors out of the picture.

90’s kid Hart Danton blows out his birthday candles on 20th June. He was born to parents Craig Denton and Chrissy Denton. He grew up in a small town in Arkansas, called Conway alongside three siblings; a brother- Haze Danton and two sisters- Gray Denton And Paten Czarina Denton.

He is a complete family guy who is very close to his parents and siblings. On his physical attributes, the 26 years old actor boasts an interesting rose tattoo on one of his arms. Further, he stands at an astounding height of 5 feet 11 inches (1.8m) with a complimenting weight of 74 kgs.

However, in his struggling days, he was much thinner. At that time, he used to work as a food delivery guy at Postmates, and he could afford to eat only when someone would cancel their order.

As of now, Hart has come a long way from his struggling days. The young actor has accumulated a significant amount of wealth through his growing career. Although his actual net worth is not known, the young actor earns an average salary of $59,565 per year from acting.

Apart from acting, Hart has also collaborated with Nyden-H&M's affordable clothing line as a fashion designer.