Is Jennifer Tilly A Lesbian Or Has Someone To Call Husband? 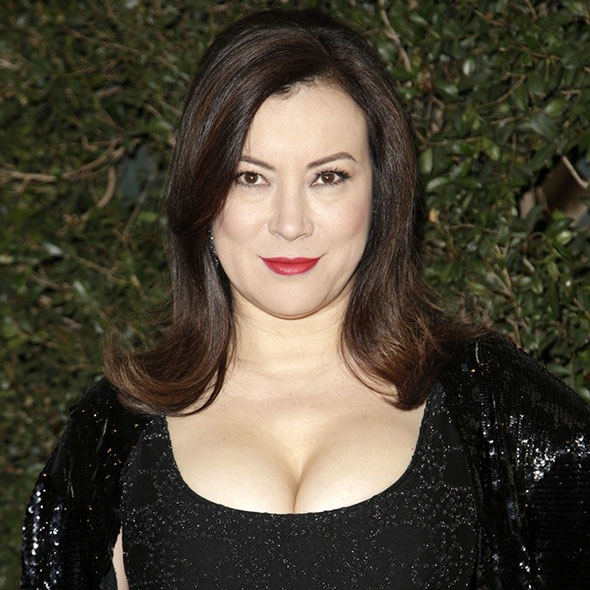 Famous Canadian actress and poker player, Jennifer Tilly,  has earned her name and fame in her career in an ample amount. Also, people do put the spotlight on her personal life as she is loved by many despite not being able to have a huge fanbase.

People often speculate about her being a lesbian and wonder what goes around in her personal life. But for those who are unaware of the reality of her life, here is all covered for you.

Is she a lesbian? Is she married? Let us find out!

Jennifer Tilly, A Lesbian Or Married To Her Husband?

Jennifer Tilly has made a name for herself with her on-screen lesbian roles. Tilly has played Tiffany in 'Cult Of Chucky' and her character has fallen in love with a woman named Nica. In this series, we can see they are having a love affair.

But in real life, she shares in an interview with Entertainment Weekly, that the on-screen kiss with Gina Gershon on 'Bound' was her first-ever kiss with a woman. She said, "I had never kissed a girl before, onscreen or off. And I was a little bit nervous."

But her relationships with men kick the rumors out of the window and keep her as an on-screen lesbian. Despite her flawless portrayal of lesbian characters, she is not really a lesbian in real life.

Those who are big fans of Tilly might know the fact that she was once married to Simpsons co-creator late Sam Simon. Sam and Tilly were married in 1984  and after several rows which are not made public, the pair got divorced in 1991 but were still close friends.

Simon passed away tragically on March 8, 2015, due to Colorectal cancer, and his ex Tilly, as well as his then-girlfriend Kate Porter, made claims to his $100million fortune as Tilly received money from his projects as part of their divorce but in the end, he donated to charities and animal rights organizations. Sam Simon with actress and ex-wife Jennifer Tilly at the press room at the 2014 Writers Guild Awards. (Photo: gettyimages.com)

But following her divorce from Simon, she was later linked with famous poker player Phil Laak, a master in the poker world. The two first met at the 2004 World Poker Tour Invitational at Los Angeles’ Commerce Casino, where Phil won the tournament.

Also, Tilly is said to be the one to initiate the move and ask for Laak's number. Having not had the best of starts to their connection, they slowly developed things between them and they were then spotted at several places together flaunting their romantic moments.

Moreover, the two were even together while Tilly was celebrating her 56th birthday in 2014. The two are still going strong and those who also follow her on her social sites must be able to see the two still together.

Jennifer and her love for her career:

Jennifer Tilly was born on 16 September 1958, in Harbor City, California, USA and she has been there and done that when it comes to her professional life.

Also Find: Who Is Rachael Crawford? Find Out All You Need to Know about Her

She is a famous voice artist and has been a part of several hit series and movies. 'Home on the Range,' 'The Haunted Mansion,' and 'Monsters, Inc.' are some of her well-known projects and she has done really well with her contribution to the success of those projects.

That has paid her a good dividend and having been focused on her career even at this age, she is been able to accumulate a hefty sum of money in her life which can be seen through her net worth of $25 million, according to Celebrity Net Worth.

Stay tuned with us for more updates on Jennifer.