By LRU Writer | On: July 18, 2019
Jeremy Clarkson has been in the showbiz for almost...hosted one of the most popular TV show in television history...fired from the show...now hosts his own show...new show never done before... 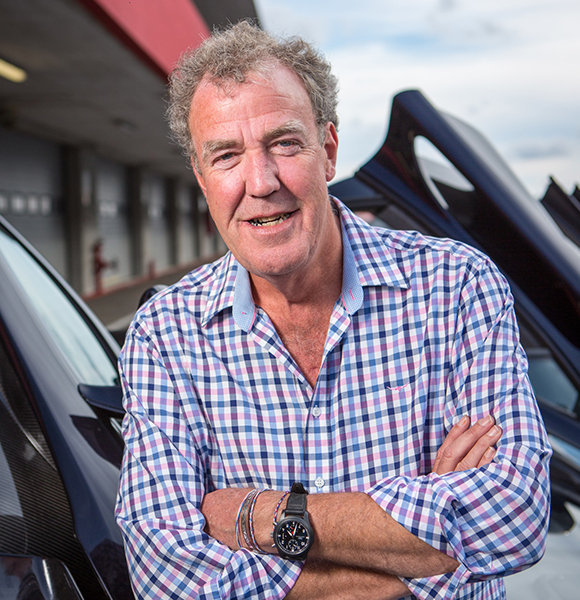 English broadcaster Jeremy Clarkson has been the icon of the petrolheads ever since he started hosting Top Gear back in 1988.

After getting fired from the show in 2015  for physical and verbal attack on a production staff member, Jeremy now hosts a similar show on Amazon Video titled The Grand Tour.

Find out more details on the legend’s career, salary, net worth, and more!

Jeremy (full name: Jeremy Charles Robert Clarkson) was born in 1960 in Doncaster, England as the son of Shirley Gabrielle and Edward Grenville. He celebrates his birthday every year on the 11th of April.

At age 59, Jeremy doesn't shy away from the dinner table; he rocks a solid dad bod. With a towering height of six feet five inches (1.96 m), Jeremy is a giant of a man.

Jeremy made his debut in TV back on 27 October 1988 with BBC2’s Top gear. During his run at the show till the 3rd of February 2000, he became known as one of the elites in the auto-journalism industry.

Dubbed "The orangutan" by his co-hosts James May and Richard Hammond, returned to present the show with a new format on 20 October 2002. The trio ran the show for 13 years, right until the BBC fired Jeremy on 8 March 2015. Jeremy Clarkson with his friends on the set of The Grand Tour (Photo: Dailymail.com)

BBC lost more than Jeremy from the incident as fans credited him for making the show one of the most viewed TV shows in the history of television.

Another One Bites The Dust:-  Piers Morgan, Massive Net Worth Holder Fired By CNN? Here's The Truth

Later, Jeremy with his friends, Captain Slow (James May ) and Hamster ( Richard Hammond ), co-founded the W. Chump & Sons company. On the 30th of July 2015, the trio announced that they would make a comeback on Amazon Video with their new show, The Grand Tour.

Even after 30 tears in the industry, Jeremy has still been on a roll. On the 9th of March 2018, it was announced that he would be hosting the ITV show  Who Wants to Be a Millionaire? Chris Tarrant previously presented the quiz TV program.

Furthermore, he has also announced that he will be part of a new show on Amazon Video, I Bought A Farm. In it, Jeremy will be showcasing the challenges faced by the farmers across the UK.

Cars, House and Net Worth

With over 30 years reviewing cars, it would be safe to say that Jeremy has driven everything from a Daihatsu to a Koenigsegg. Throughout his time he has stashed his garage with a lot of exotic cars. To name a few, Jeremy is a proud owner of a Lamborghini Gallardo Spyder, a Ford GT, a Porsche 911, and a Mclaren 675LT.

There is no doubt that with a successful career in TV, Jeremy has been able to enjoy every bit of his childish dreams. In July of 2018, he blew up his Chipping Norton countryside £4 million farmhouses to build a new one.

Jeremy is estimated to have a net worth of $60 million and takes home an astounding salary of $20 million per year.

English Broadcaster Top Gear The Grand Tour I Bought A Farm Who Wants to Be a Millionaire?