Who Is Jessica Cox? Interesting Facts On Mike Trout's Wife 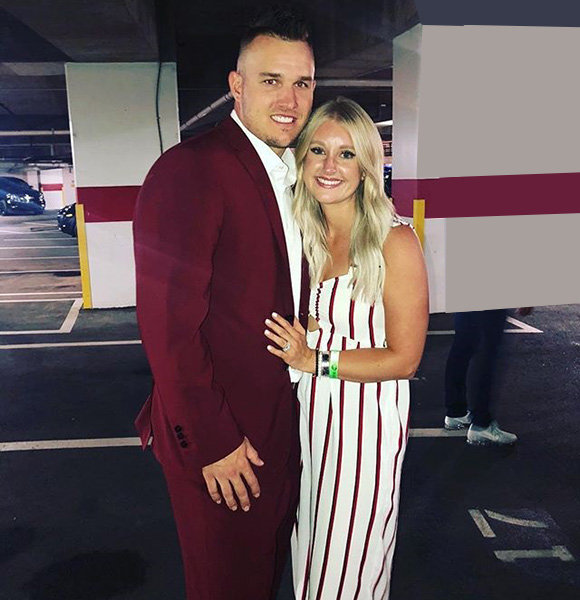 Jessica Cox is famously known because of her husband, Mike Trout, who is a professional baseball player for the Los Angeles Angels of Major League Baseball (MLB). She initially rose to fame for being his high school sweetheart.

High school lovers, Jessica and Mike, met while attending the same high school, Milleville Senior High School, in Millville, New Jersey. They started as boyfriend and girlfriend who dated in high school, where Jessica was one of Mike's best friends as well.

Following their dating period, Mike proposed to Jessica on the 29th of June 2016. In a very romantic and extravagant way, the husband asked her to be his wife by having an airplane write the question “Will You Marry Me Jess?” out in the sky.

Then, after more than a year of becoming Mike’s wife-to-be, Jessica got married to her husband.

Their wedding took place on the 9th of December 2017 at a pastoral estate in Allentown, New Jersey. Garret Richards, one of his teammates who attended the wedding, said that the ceremony was 'amazing' and 'beautiful.'

The wedding was followed by a two-week honeymoon in Hawaii and Bora Bora. Jessica was pregnant with a baby boy, which was announced by Mike that the couple’s first kid was due in August of 2020.

The MLB star announced via Instagram that he and his wife welcomed their first child on 30 July 2021. They named their son Beckham Aaron Trout.

Shortly after the post, some of his fellow MLB players sent congratulations to the new dad.

Houston Astros pitcher Justin Verlander wrote, "Happy birthday Beckham!" Then, Garrett Richards of the San Diego Padres added, "Welcome to the Dad club kiiiiid! Can't wait to get all the boys together!!"

According to ESPN, Mike was placed on the Los Angeles Angels team's paternity leave just a day before welcoming his child.

The three-time MVP was excited over becoming a father. He said;

I just can't wait to meet him. We're excited. Jessica has been really strong and brave. I don't know how women do it.

Being a caring husband, Mike was initially hesitant about resuming the 2020 season because he was concerned about contracting COVID to his wife.

More On Her Husband

Mike Trout was born on the 7th of August 1991 in Vineland, New Jersey. The Los Angeles Angels selected him during the 2009 MLB Draft, and he made his professional debut for the Angels on the 8th of July 2011.

Mike stands at the height of 6 feet 2 inches (1.88 meters). His parents are Jeff Trout and Debbie Trout.

He has an estimated net worth of $60 million according to celebritynetworth and earns a salary of $35 million per year.

Jessica Tara Cox was born on the 5th of October 1989. Her birthplace is Millville, New Jersey, the United States. She attended Millville Senior High School.

Jessica, more commonly known as Jessica Cox, is currently working as an elementary school teacher at Dennis Township School Board in New Jersey. She specializes in teaching students with special needs and elementary kids.

Upon her graduation from high school, Jessica attended Lebanon Valey College in Annville, Pennsylvania. She got a degree in elementary and special education.

The couple participated in the Mike Trout Experience organized by former MLB player Chris Singleton in 2013 to raise funds for at-risk youth in inner cities.

She grew up alongside her two brothers. Her brother, Aaron Cox, who played Minor League baseball for the Angels, passed away on the 15th of August 2018, at the age of 24.

Looking at their happy family of three, we cannot wait to update you guys more on the married couple.