By LRU Writer | On: November 21, 2019
Jessica Origliasso is a pop singer who is known to be the one half of the band called The Veronicas. She is also recognized as ‘Emerald Buxton’ as she played the character in the TV show called Cybergirl...Those who follow Jessica on Instagram must have seen the photo she shared on 31 October 2019 revealing her...the two started dating...The Veronicas alum was born on...she has been able to collect a total net worth of 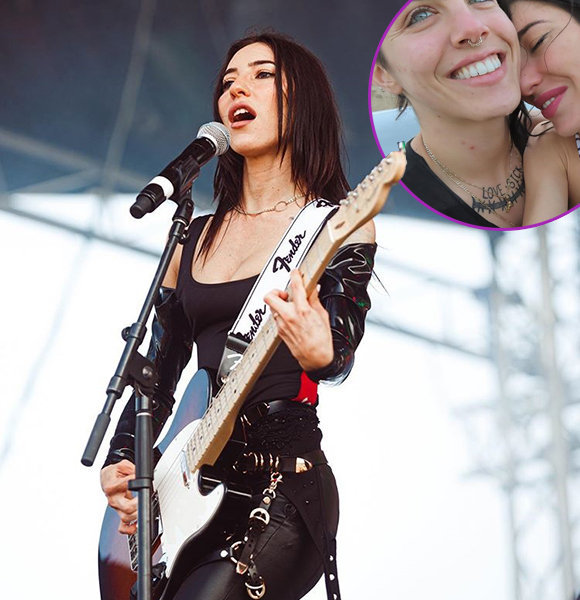 Jessica Origliasso is a pop singer, who is known to be the one half of the band, The Veronicas. She is also recognized as ‘Emerald Buxton’ as she played the character in the TV show called Cybergirl.

In late October 2019, the singer-songwriter made headlines with a surprise to all her fans. Well, it was a happy surprise as she got engaged to her partner. Read more to find out about her dating life and partner.

Those who follow Jessica on Instagram must have seen the photo she shared on 31 October 2019, revealing her engagement ring. Yes, she got engaged to none other than her partner of more than a year, Kai Carlton- a trans man who is a singer and songwriter

The engagement was not a total surprise as Jessica had revealed her partner back in November of 2018 via Instagram. Furthermore, she and her fiancé also got matching tattoos of an angel sitting on a heart that has a sword going through it on their legs.

Before Kai, Jessica dated actress and model Ruby Rose in 2008. However, the two also dated briefly in 2008 though their relationship did not last long. The two again rekindled the relationship in 2016 when working on a music video for The Veronicas called On Your Side. They then went on trips to China.

But suddenly, Ruby deleted almost all the photos related to Jessica in September. Her action hinted towards a break-up, but they were again seen on the red carpet at the Australian Emmy nominees sunset reception on 17 September 2017. Their on-off relationship finally ended in 2018 after Ruby took to her Twitter to announce the news.

Growing up, she went to the Ferny Grove State High School and later got enrolled at the Wavell State High School. Apart from these pieces of information, nothing about her early life seems to have surfaced the internet.

Coming to the topic of her appearance, she stands five feet and 2 inches tall (1.57m) and has had her body inked multiple times.

She first got her tattoo when she was eighteen years old. But since 2014, the singer went through a tattoo removal for the ink on her left arm. She also plans to replace her existing tattoos with something more relevant to her.

Talking about her career, her duo band The Veronicas released their first debut studio album in 2005 called The Secret Life Of... which ranked #2 on the Australian music charts and #5 in New Zealand. Similarly, they released other albums such as Hook Me Up, You Ruin Me, and In My Blood.

With the success of her albums and even acting in the show called Cybergirl, she has been able to collect a total net worth of $6 million.