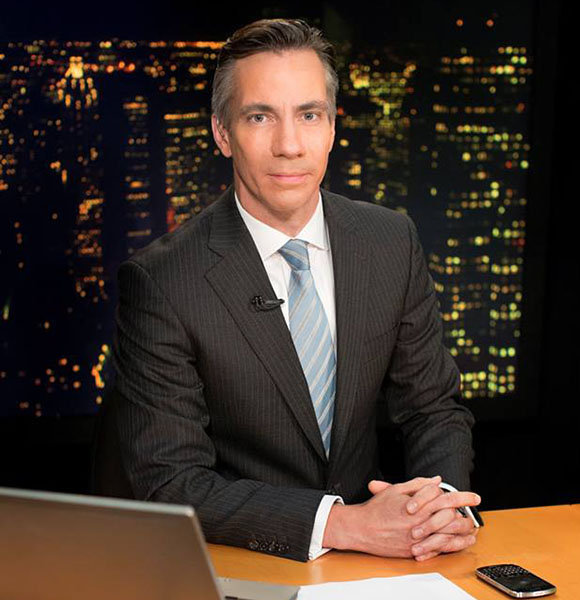 Add that to his already jam-packed schedule -- it’s a disastrous mix. While the toll of his busy work schedules is most likely to hamper his family time with wife and kids, the correspondent has kept a secret formula to strike the right balance between work and family life!

Well, know Jim Sciutto pulls off his A-game for balancing his work and family life!

Raising kids with either of the two parents in the job market is already hard enough, on top of it, running a household where both husband and wife work just grows the pressure.

But everything comes easy for CNN’s very own Jim, age 48, has mastered the art of parenting. With the help of his wife, Gloria Riviera-Scott, he has achieved the seemingly impossible act of keeping everyone happy. And in the March 2018 interview with Fatherly, the Yale University alum let the world know his secret.

He prefaced his advice on making time for kids by mentioning the long and unpredictable schedules he and his wife have to put in at work. And then he quickly followed up with:

"I take them to school pretty much every day. I drive them and like to take them right into their classrooms. That gives me a chance to interact with their teachers and their friends."

For him, weekends with his kids are equally important because it allows them to bond over “sports, activities and little adventures.”

Jim and his wife, Gloria - who’s an NBC News Correspondent - are proud parents of three kids: Tristan (age 9), Caden (age 7) and Sinclair (age 2). Both of their latter kids were home-delivered.

They had married in 2006 after meeting three years earlier while both of them were on assignment in Baghdad.

Although, the Yale University alum’s fatherly qualities are praiseworthy, how he was raised by his own parents is something noteworthy. Especially, his relationship with father has more or less shaped the father he is today. The father of three kids pens a heartfelt tribute to his father (Photo:- Jill Scuitto's Instagram)

Even his wife, Gloria has spoken about his relationship with his father. In the 2014 interview with Washingtonian, Gloria quipped:

"Jim’s father was his best man and remains his best friend."

No wonder, Jim never fails to dedicate a post to his father, every year when the death anniversary comes around.

While at ABC News, the veteran journo traveled to over 50 countries covering mostly war stories. His book Against Us: The New Face of America’s Enemies in the Muslim World is based on his experience as a wartime correspondent.

For his coverage of 2009 election in Iran, the Yale University alum was awarded Edward R. Murrow Award. Likewise, his reporting on the news series Iraq: Where Things Stands earned him two Emmys.

As for his most recent accolades, he worked as the chief of staff to the U.S. Ambassador to China, Gary Locke. Having served his time there, Jim seems to be looking forward to working alongside his CNN Newsroom co-host, Poppy Harlow - who has a reported net worth of $6 million.

Jim, on the other hand, hasn’t made his finances public just yet. However given his seniority, he surely has been able to amass net worth in millions. His book sales too should help boost his ever so growing net worth.

The same can be said about his salary at CNN. A CNN correspondent makes an average of $120 thousand annually in salary including incentives and bonuses.

Nothing suggests that the veteran journalist is looking into earning more money, he looks content with being able to spend more time with his kids and family.