Johnny Orlando Girlfriend & Dating | Who Is The 15 Years Old's Squeeze?

By LRU Writer | On: September 14, 2018
YouTuber/Singer Johnny Orlando achieved success at a young age, but few would have suspected that this teenager would win the hearts of millions of female fans from his singing talent and looks...His alleged girlfriend also happens to be a singer...Family, Career, Age, Height, Net Worth and More... 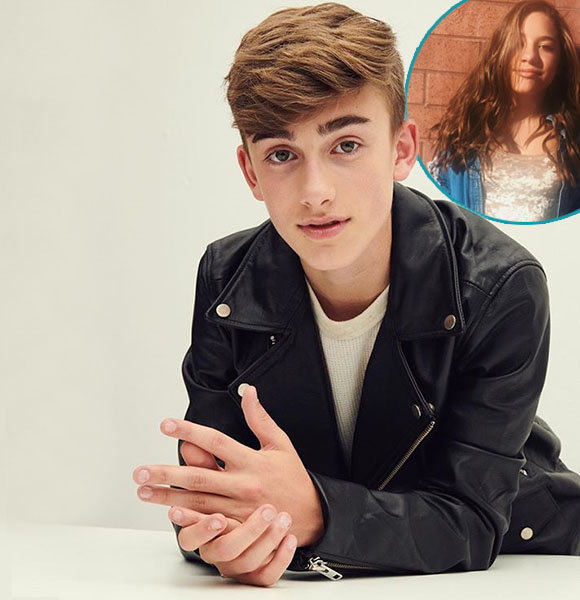 YouTuber/Singer Johnny Orlando has written success all over his career at a young age.

Few would have suspected that this teenager would win the hearts of millions of female fans from his singing talent and looks alone. Johnny, who initially rose to fame singing cover songs, has now made a career out of his talent.

And the Ontario, Canada native also found the love, who is also the same profession like that of him.

Johnny has been a ladies man since a young age, and even his jokes accumulate the girlfriend talks.

Back on 10 August 2014, when Johnny was 12 years old, he posted an Instagram picture alongside a woman named Carly Gronwall and jokingly mentioned that she was his future girlfriend. However, Johnny's statement was only meant as a joke, and he had no intention of dating Carly in the future.

In the recent times, the YouTube star has been growing close to American singer/dancer Mackenzie Ziegler, who has appeared in several of Johnny's videos and even sung in one of his songs called What If which features the story of two rebellious lovers who date each other despite their parents' protests.

The dating rumors sparked in February 2017 when the alleged couple was spotted hanging out together at Johnny's concert held at the Avalon on 11 February 2017. Johnny and Mackenzie are yet to affirm their relationship, but their constant mention of each other social media sites implies that the two young people are indeed dating.

For Mackenzie's birthday on 4 June 2018, he even posted a picture of the two wishing his rumored girlfriend on her special day. Johnny and Mackenzie collaborate for a concert in 2018 (Photo: Johnny Orlando's Instagram)

The pair was spotted recently in August 2018 at the Summer Social Festival held in Liverpool, UK. Even though it is apparent to many that the two are dating, maybe the couple are taking their time to come out with their relationship.

Family, Career, And Net Worth

The son of Dale and Meredith Orlando, Johnny started his YouTube career posting cover of songs by famous singers such as Justin Bieber and Austin Mahone. He initially began posting videos at the age of 8 with Darian, and the siblings posted covers of some hit original songs including Summertime, Never Give Up and Replay.

Starting from 2016, he began posting original songs on his self-titled YouTube channel. Further, he also appeared on the cover of March-April issue of the teen magazine named TigerBeat.

From his YouTube career, Johnny earns a salary averaging $17.3K - $276.5K per year but has not disclosed the exact amount of his net worth. Further, with his considerable net worth, Johnny has helped his family in their financial matters.

He has also boosted his elder sister, Darian's career who has regularly appeared in his videos.

Johnny, who ages 15 and stands at the height of 5 ft 1 inch (155 cm), is the only son of his parents but has three sisters. His elder sisters Darian and Madison along with younger sibling Lauren are close to each other.

Together, the siblings with their parents are one happy family and often traveling to various destinations. Most recently in August, Johnny along with his family traveled to Zurich, Switzerland where the family celebrated some personal time with each other. Johnny's mother, Meredith even posted a picture of the family from Zurich on 17 August 2018. Johnny along with his family having lunch at Zurich, Switzerland (Photo: Meredith Orlando's Instagram)

Looking at Johnny's schedule, he may wait for some time until he manages to break free from his work commitments and plan another trip with his family.