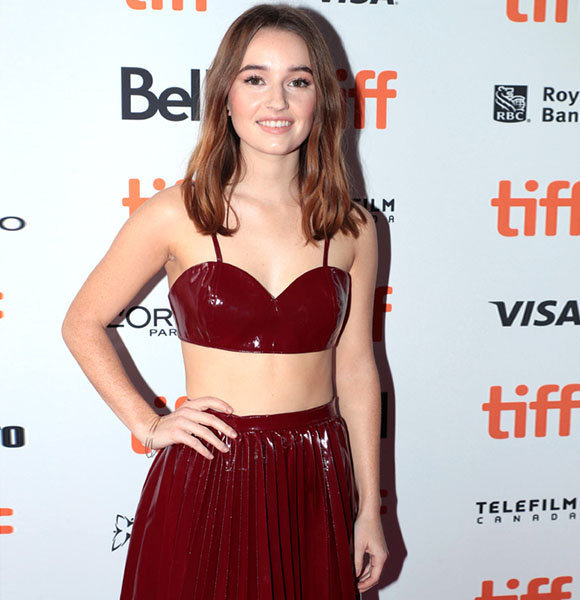 American actress, Kaitlyn Dever, is famous for her prominent role as Gwen Thompson in the movie An American Girl: Chrissa Stands Strong.

Just at the age of 25, Kaitlyn has grabbed some impressive movie and television credits on her resume.

But does this beauty has a boyfriend?

Kaitlyn has kept her personal life very private and is often asked about her dating life. While Kaitlyn, with her perfect measurements, has grabbed many followers with her beauty but her romantic life has always been a mystery.

Even though she has been in a romantic relationship in her on-screen portrayals, she has not yet come forth about her relationship with her boyfriend. Additionally, as far as the record goes, she has not been tagged with any other names suggesting romance just yet.

Being famous comes with rumors. In 2021, Kaitlyn was rumored to have a boyfriend, and it was no other than Benn Platt. The stories started to speculate about Kaitlyn being in a romantic relationship with her boyfriend after she uploaded an intimate picture with Benn Platt. Kaitlyn with Ben Platt on the set of Dear Evan Hansen(Source: Instagram)

But, in reality, Ben Platt is openly gay. Furthermore, Ben has been open about his relationship and boyfriend on social media. So we can assume that Ben and Kaitlyn are really close friends and nothing more.

Likewise, rumors about Ansel Elgort being her boyfriend got quite some attention. The gossip started from their romantic on-screen kisses, making the viewer very suspicious of their real-life relationship. However, neither of them confirmed their relationship. The rumors died after finding out that Ansel was still dating Violetta Komyshan.

Moreover, she has not spoken about her romantic life either on her social media or in any of the interviews. By the looks of it, it seems that Kaitlyn enjoyed her single life while focusing more on reaching the heights of success in her career.

While Kaitlyn reaches the height of success in her career, she has her sister alongside her attending events. They have become an inseparable duo as they perform at high-profile events along with attending movie premiers.

Inseparable Bond With Her Sibling

Kaitlyn Dever is one of the three daughters of Tim and Kathy Dever. She is extremely close to her father, whom she considers her best friend. Her loving father and mother raised the actress alongside her two siblings, Jane Dever and Mady Dever.

While the three sisters are each other's support, Kaitlyn is much closer to her sister Mady, who is a screenwriting student at Chapman. Jane is her younger sister, while Mady is the older one.

In the meanwhile, Kaitlyn, who stands at the height of 5 feet 3 inches(1.6 meters), often posts pictures with her sisters on her Instagram account. She even posted the photo with Mady and Jane while sending out National sibling day wishes to her sisters. She has had a lot of exposure since she was a child and has been in a lot of movies and television shows, which has been her main source of income.

Kaitlyn is an amazing actress and has had lots of success. She has been doing well in her acting career, with notable TV series and movies to her credit, making her net worth around $2 million.

Kaitlyn Dever is an incredible actress. She is well-known in the entertainment world for her ability to play excellent characters in films.

It all started when she appeared on Make It Or Break It for the first time. She has since appeared in various TV shows, including Justified and Curb Your Enthusiasm, and movies such as Detroit. She also had a recurring role in the Netflix show Unbelievable, which premiered in 2019.

So, due to her involvement with such a major streaming company, it's obvious that she is earning an impressive paycheck. Moreover, viewers can expect to see a boost in her net worth along with success in her upcoming projects.

More information regarding her will be available in the future. Stay tuned with us for more updates about her relationship.